Macross: Scramble Valkyrie for the SNES 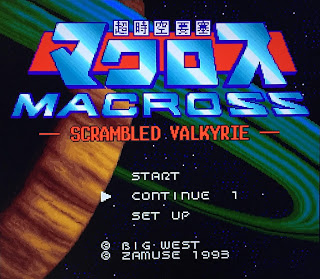 Robotech was one of the better 2nd-tier cartoons of the 1980's. I say second tier because is not as much of a household name as Transformers, G.I.Joe, He-Man, and so on. It was only broadcast on smaller networks, and at moderately inconvenient times (I think 6 a.m.). It was a translation of the  Macross anime series, which was popular in Japan in the early 80's. The series is known for its giant transforming fighter plane mechs, and dramatic personal relationships that developed between the main characters. The localization consisted of a few name alterations and some stretch editing to prolong the series into a full season here in the U.S.

Chō Jikū Yōsai Macross: Scrambled Valkyrie is a game for the Super Famicom, only released in Japan. Fortunately, it is playable on a NTSC Super Nintendo if you remove the plastic barrier tabs in the cartridge slot. The game follows the plot of the anime series; how closely I don't know as I am not too familiar with the original. I imagine its pretty much the same as the localized Robotech story, which goes like this. A giant alien ship crash lands on earth. The world is in the midst of a global world war, and ceases 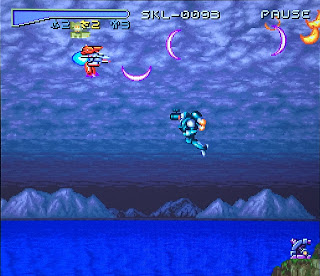 The game is a one-player horizontally-scrolling shoot'em up. You can choose between three pilots: Hikaru, Max, and Milia. Americans may know Hikaru as Rick Hunter, Max is still Max, and Milia is Miriya. I wish they included Roy Fokker, as I he was my favorite. Your veritech fighter can transform on command into its three modes: plane, guardian (gerwalk), or battloid (battroid). The three different forms handle differently. The plane is the fastest. The guardian has the most agility and best speed level as you can navigate tight quarters. The battloid is the slowest, and largest target as it stands upright. In addition to different handling of the three forms, the weapon load out varies with the configuration as well, and each character has vastly different weapons on their crafts. This makes for nine unique weapons available during the game. In addition, each can be leveled up three times by collecting "P" icons. 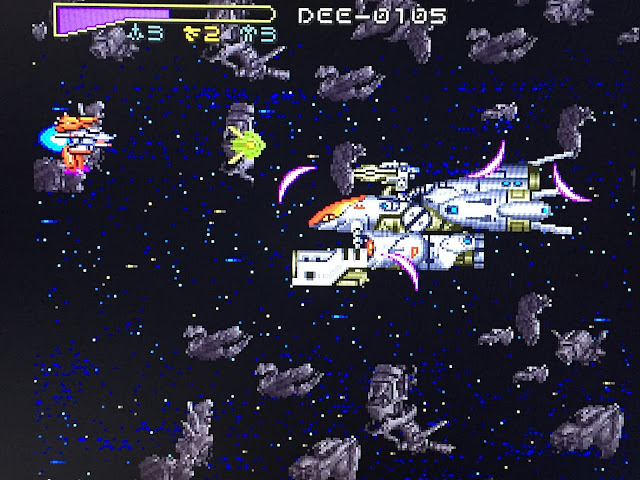 Weapons by character:
Hikaru (aka Rick Hunter)
plane - straight ahead piercing laser
guardian - maching gun with vertical bombs (above and below)
battloid - machine gun with powerful but slow missiles

Max
plane - machine gun that can spread with power ups
guardian - strange energy ball chain thing: can be maneuvered as a defensive shield but hard to use
battloid - homing shots


The gameplay takes al of these character nuances into account as the stages require knowledge of which weapon/craft is ideal for a given situation. You'll have to learn how to pilot all three forms as just one will not be successful through an entire stage. In wide-open space with waves of enemies the plane or guardian mode is the way to go. In tight corridors the guardian or battloid will negotiate the space and obstacles better. Each boss and mini-boss battle is unique, so you just have to see what works. Due to the variety, there's loads of replay value. 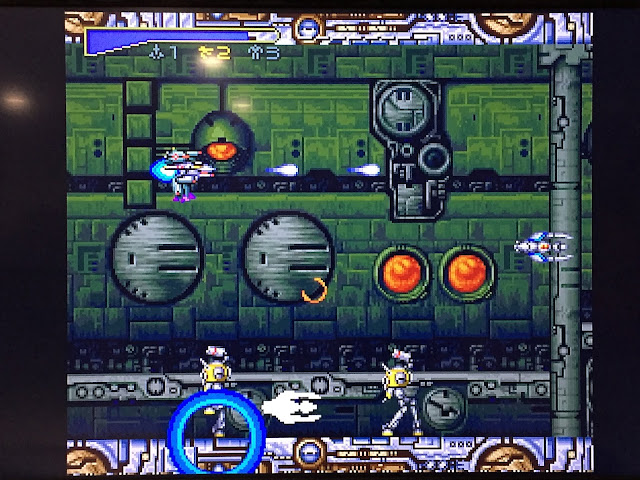 The difficulty is adjustable, but I found that normal was too difficult initially, at least until I became familiar with the stages. If you collide with the walls and other stage elements, that counts as a hit.
Your ship has a shield gauge, which can withstand about 4-5 hits. Also, each hit will power down your currently selected ship configuration. Three continues are provided, and more can be picked up in the stages. "S" icons will restore some of your shield. A Minmei doll will restore your entire shield.

The most unique gameplay aspect is the "Minmei" weapon. When you refrain from firing for three seconds, your craft will have a glowing aura around it. Touch an enemy during this and that enemy joins you, and follows you around, firing at its former allies. The enemies all have different patterns and styles, and you can swap one out for a different one as you progress. This is pretty useful, especially since your little helper is not confined to the same physical stage barriers that you are, and is seemingly indestructable. While not as useful as the claws in the Thunder Force series, or the multiples in Gradius, its is still a welcome addition, and fits in with the storyline.


The game presents you with new challenges and enemies that are refreshing and unique. In stage one, gravity mines litter the field of play, and navigating away from them as you are under attack is challenging to say the least. In stage three, giant missiles zoom towards you seemingly from out of nowhere, until you see the missile battery up close and have to figure out how to take them out without being in the direct line of fire. Later, the ship fills with water, making buoyant enemies bob with the water level and float in and out of your path.

Visually, the game is very appealing. Sprite design is very faithful to the series, and there is lots of variety. The parallax scrolling in some sections rivals that of the Genesis. From the start of stage one, a giant enemy ship materializes on screen in a flashing, screen obscuring manner. From that point on you know this is not a typical shooter. Even the background have extra details that show the love and effort put into this game by the developers. 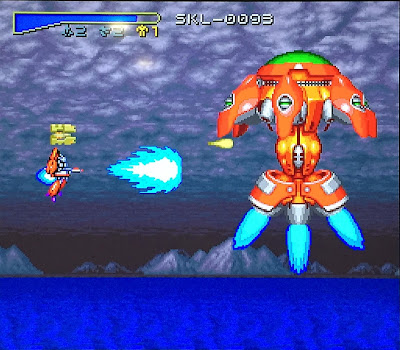 While licensed games are generally shoddy and quick cash grabs, this game seems to buck the trend. It is a fantastic game for anyone who is a fan of the genre, and doubly so for fans of Robotech/Macross. Its a shame that it was not released here, as it is easily one of the top three shoot'em ups on the SNES.