My Adventure With Rhea, the Sega Saturn Optical Drive Emulator 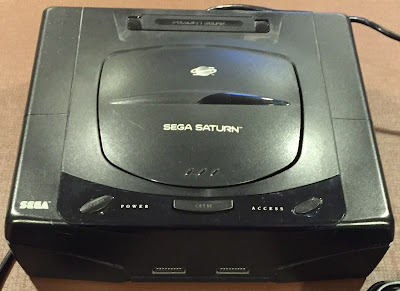 I have been an avid collector for the Sega Saturn since the late 2000's. Its fair to say that it is one of my top 3 favorite consoles. I particularly enjoy all things 2D, and the Saturn had that in spades, but only if you import; the domestic Saturn library was focused on 3D gaming, as that was the trend. It's a shame, as many top tier games for the system happen to be 2D games like Radiant Silvergun, Battle Garegga, Batsugun, Street Fighter Zero 3, X-Men vs. Street Fighter, and so on. Of course many of these games have become quite collectable of late. Some of these have been rereleased recently, like Battle Garegga and Radiant Silvergun, but many have not. Anyone who has started collecting for the Saturn has come to the realization that it is just too cost prohibitive now.

Emulation has been a handy tool for gamers to try out games that were too costly to obtain. Holy Grails like Chrono Trigger on the SNES, MUSHA on Genesis, and Magical Chase on Turbo Grafx all can be played with relative ease on a computer or rom cartridge. This is not the case with Sega Saturn games, however. The Saturn's internal architecture made for some difficult programming back in the day, and only the best programmers could make use of the Saturn's potential. What that amounts to is emulation that is behind the curve compared to its contemporaries. The gems of the Saturn catalog are locked in physical form until its emulation matures. Or until something else comes along. Enter  Rhea. 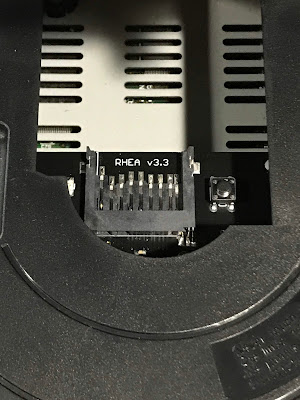 The Rhea is an optical drive emulator (ODEMU) for the early Sega Saturn models (the Phoebe is the version for the Model 2). It is a device that reads roms from an SD card, instead of a laser reading a disc. In effect, it forgoes the need to use the CD. Much like the Everdrive which came before, it is a bridging of modern tech and original hardware. This comes at long last, as some games reportedly have succumbed to the dreaded disc rot. I have only one game that this has happened to, and it wasn't fatal as the hole must have been in an unused sector of the disc. Even still, this can give a collector chills just thinking about the potential disaster looming.

ODEMUs and Everdrives offer the benefit of keeping games protected and not risking scratches, and that was a motivation for myself. As Saturn game values skyrocket, they have inadvertently become something of an investment. I never would have though they'd be worth so much, but here we are. The Rhea will allow me to play backups of my games, keeping the originals is prime condition, should I decide to sell them at some point.

Since the Rhea physically replaces the laser in the console, it is best used in a Saturn that has a dead laser. I bought one off eBay as I didn't want to sacrifice one of my working units. The installation of the Rhea itself is very simple (The Phoebe units require some minor soldering).

The most difficult part of the process was the software end. There are a lot variables, and its easy to get lost in the sea of technical information if you're not used to working with various computer file formats. First of all, you will need to properly rip the game from your discs, and in the allowed formats: CDI, CCD+IMG+SUB, MDS+MDF, and some ISO files as long as there are no separate audio tracks. There are many applications that will do this, and the one that the internet says will work best is Disc Juggler. I had mixed success with this, so the games I couldn't back up I found through other sources. Secondly, the Rhea seems to dislike micro SD cards, or at least my micro SD cards. This was particularly frustrating as I worked on the same cards for days before I tried a regular SD card, formatted in FAT32. Thirdly, the folder structure is a little wonky. Rhea only likes folders with numbers, and will only read the game in the first folder. To change to the next game, you need to press the small button on the board to the right of the card slot. This is highly inconvenient to say the least. Thankfully, there is the RMenu program by Neuracid, which provides a menu interface and allows the games to be selectable on screen. 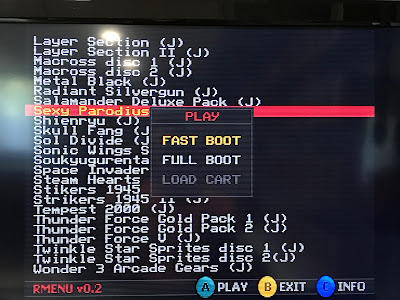 The action replay (AR) cart, which is the defacto-norm when it comes to bypassing the region lockeout on the Saturn, can still be used for its RAM, cheats, and memory capabilities. Leaving it in all of the time will be annoying, as every time a rom is selected the Saturn intro screen plays, along with the AR load screen. I just leave it out until I know I need it.

After a week of frustration and reading/watching every resource online, I finally broke through and got everything working. I am happy to report that games play, look, and sound as they should.

So at this point I ask myself when I'll hook up a Saturn with a laser and play my original copies. I asked myself this when I got the Everdrives. It is just too convenient to select a game from a menu. I used to love pulling a game off the shelf, opening the case, and plugging it in. That appeal has worn off somewhat recently. I seriously doubt that I will sell off all of my games, but maybe I don't need all that I have. Playing the games on original hardware is my preference, and now that is possible on the Sega Saturn. Its interesting to see how perspective can change over the years.