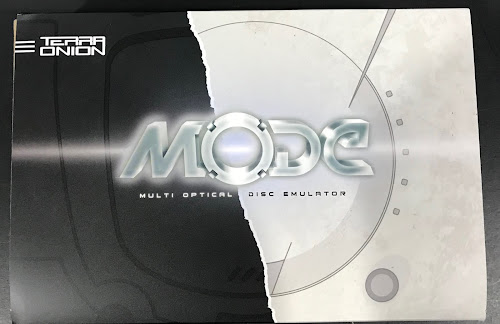 As video game consoles age, they are more prone to failure, especially when moving parts are involved. The more complex the console's design, the more susceptible it is. As such, the lasers in optical disc consoles are less robust than their cartridge predecessors. An optical disc emulator is a device that replaces the laser assembly in a disc-reading game console. The purpose is twofold: to breathe new life into a dying system, and to allow games to be played from modern storage devices, like SD cards and USB drives. For a proper explanation of MODE, I feel it is necessary to discuss previous ODEs for comparision and context.
The first optical drive emulator (ODE) that I encountered was the GDEMU, for the Dreamcast. It was a simple board, easy to install, and initially hard to acquire. It was developed and distributed by Deunan Knute. Since it was/is a hobbyist venture, production occurs in small batches, and demand greatly surpassed supply. This led to the cloning of GDEMU, and the soon the clones were all over eBay. These clones are supposedly very similar, and hard to tell apart from the original. One surefire way to tell is if you brick the unit while trying to upgrade the firmware, as the clones are not compatible official firmware.
The installation of the unit is easy, but the SD card setup is a pain, at least it was for me. My desktop computer is a Mac, and per usual, there are fewer software options for Mac users. I have an old HP laptop that barely runs Windows 10 that I use for programs of this sort, and its not graceful. From needing to format to FAT32, to ripping the games into the CCD or GDI formats, to adding the games to numeric folders, there is some nonintuitive front work needed. I eventually got it running, but there are still weird issues here and there that bother me. Things like extra folders titled "unsupported game", or the super long startup process. I like things to be neat and organized, and fixing weird errors and issues took some sleuthing and a lot of time. I teeter back and forth as to whether it is worth it, as I still have all of my original games, and another Dreamcast that is region modded. 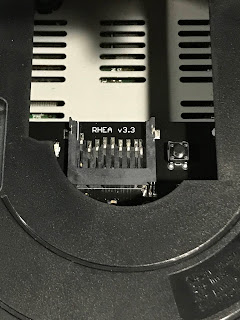 My second ODE was Rhea, for the model 1 Sega Saturn (20 pin variant - there was also a version made for the model 2 Saturns called Phoebe). Also produced by Deunan, the one-man shop operation was also limited in its production scope. I resorted to picking one up from eBay.
I was far more interested in this than the GDEMU as the Saturn is possibly my favorite console.  I have way more games for the Saturn than the DC, and so using Clone CD to rip the games to CCD format was a long and arduous process. Prepping the SD card was equally as painful as the GDEMU, perhaps more so due to the larger number of games that I processed.
Operationally, the Rhea works wonderfully once configured properly. It allowed me to play my games without fear of dropping or scratching them, as Saturn games have really shot up in value (I'm not so concerned with value as I am the cost to replace). The button combination to back out to the menu is a nice touch. 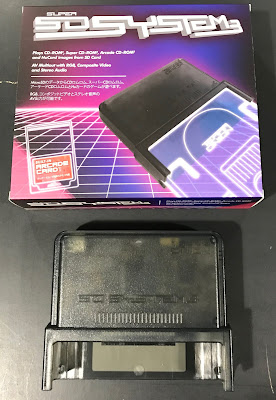 My third ODE is the Super System 3 for thePC Engine/Turbo Grafx-16, made by Terra Onion. This is not as much a disc drive replacement as much as it is an accessory that mimics the CD Rom attachment. The setup for this was significantly easier than the two previous entries. All you need to do is drop your game files (CD Rom games or Hu card games) onto a card and insert; its about as plug and play as it should be. There is something to be said for simplicity of setup when it comes to devices like this.
There were some issues early on with video quality, but those have been mitigated since. Not only does the SSD3 allow you to play your games from an SD card, it taps into the RGB video pinouts, allowing mod-free RGB video with the proper cables. Last but not least, it contains the necessary CD system cards built in. Using all original hardware to play PC Engine CD Roms is confusing and expensive, so this unit is well worth it's asking price.
That brings us to MODE, an acronym for Multi Optical Disc Emulator, again produced by Terra Onion. This is like a GDEMU and Rhea combined into one; you can install it either in a Saturn or a Dreamcast. I don't think I'm going to swap mine back and forth, but it is an option. It's functional purpose is the same as the first two ODE's, to play games from an SD card. This carries with it some additional features, such as being able to use three different storage formats: micro SD, USB, or hard drive. Use whatever you have lying around, there is no need to buy additional storage if you have it. MODE is compatible with both versions of the Saturn as well as VA0 and VA1 Dreamcast variants. 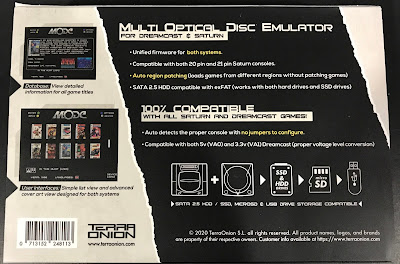 The installation of MODE does not require any soldering, just some disassembly with a screwdriver. The board itself is larger than the Rhea, to accommodate the added pin outs for variety of models that it supports. Its a wonky fit, as one of the legs is poised to rest on the ribbon cable for the controller board. The legs that come with it have self adhesive feet, so this helps keep it in place.  Also, once installed, the storage device is not accessible as it is in the other ODEs, so make sure you have what you want on the SD card the first time, or you'll be taking the console apart over and over. 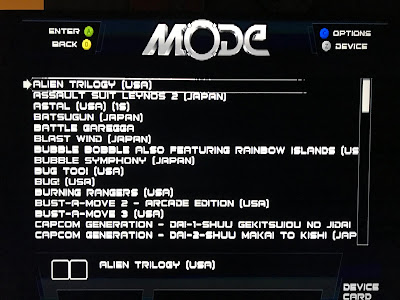 The interface is clean and simple, if a little jittery as it is presented in 480i. Games can be nested in folders, which is a big deal for me, as I like to categorize my games by genre. The menu options are sparse but appreciated, and currently the reset to menu feature is not working, it just resets to the same loaded game. However, I have been told by customer support that this will be remedied in a future firmware update. I hope this comes soon, because power cycling the console to change games gets old.
The menu has support for cover art display, via downloadable support file. This is a nice touch, even if some of the art is oddly cropped. 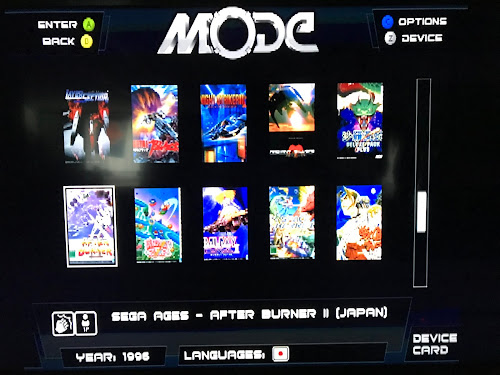 The gameplay is as it should be, I have not encountered any issues with any of my games. The RAM carts work as they should as well.
Priced at $200 ($182 euros), it is the most expensive option compared to Rhea/Phoebe (132 euros) and Finrir ($104.5). Even still, I feel like this is the most polished option, and users will have the most positive experience with it. Tinkerers who don't mind doing extra legwork can get along just fine with the others, I did for a while. But I found those to be cumbersome whenever I wanted to change something, I had to relearn the nuances and quirks of the setup and eventually ended up succeeding, but not without struggling.
Overall, I highly recommend MODE. While there are other devices options that achieve the same function, MODE has refinements that improve the user experience. The higher compatibility with game files, the multiple options for storage media, the clean and simple visual interface, the ease of setup, and availability are all reasons that put this at the top.
By andrewpark800 - July 18, 2020 1 comment: