My Visit to Retro Game Stores in Akihabara 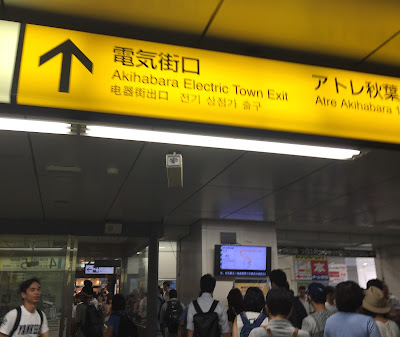 This summer I had the chance to vacation in Japan with my family.  We stayed is multiple locations, one of which being Tokyo.  Being a family vacation, the majority of activities were sightseeing and family-friendly activities.  On one of the days I was able to slip away and go to Tokyo's famous electric town, Akihabara.  This neighborhood is jam-packed with technology goods stores, anime stores, pachinko parlors, arcades, and the like.  Anticipating that I would eventually make may way here, I procured a map online from retro-video-gaming.com to help me navigate efficiently through the area. 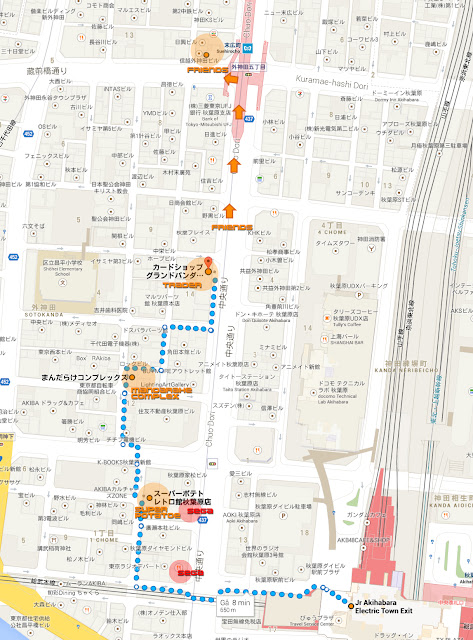 The area is relatively compact, and blocks are not as large as here in the states, so things were not as far as they might appear.  My first stop was the most well-known retro gaming store in Japan, Super Potato. 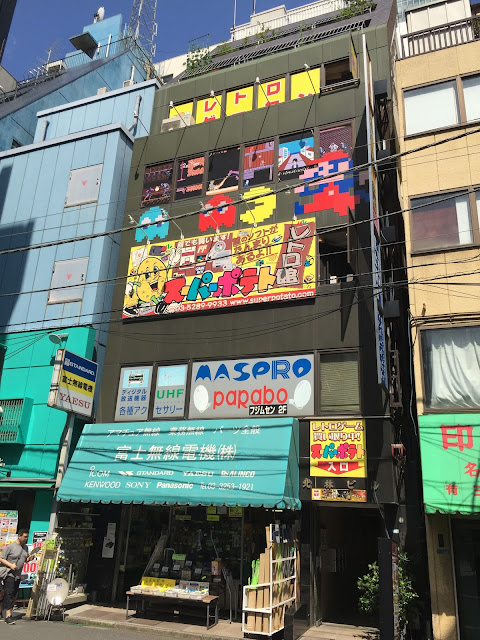 This store is has the largest selection of all of the stores that I visited.  The store is actually spread over three floors. 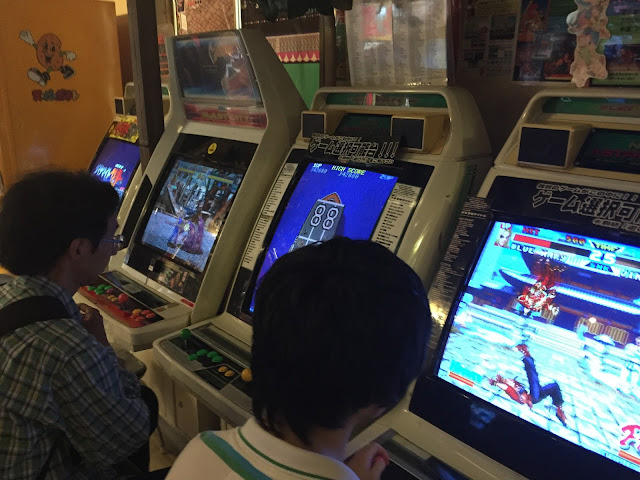 Overall it has pretty steep prices for games in high demand.  For common games, the prices were a bit above average, but manageable.  I didn't buy a lot here, but it was still amazing to see in person.

The next stop was Mandrake. 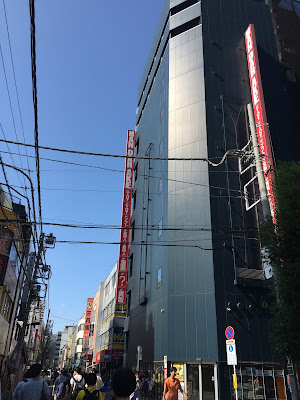 They did not allow photos in this store, but I can tell you that its prices on everything were through the roof.  I spent the least amount of time here.  The selection was decent, but as I wasn't willing to pay over top dollar for what they had.  Moving on.

Trader is a resale chain that has several locations.  It had a decent selection of games, and a lot of hardware.  It was here that I lucked out and found an official Sega Saturn-style controller for the Playstation.  I have always disliked the d-pad on the Playstation controllers, and this is my wish come true.  I had always put if off, because being a rarity, it was pricey (>$100).  Here I found it for about $45!
RPG's on the Super Famicom are a dime a dozen here.  Chrono Trigger, which usually goes for about >$100, is just under three dollars.  These and Final Fantasy games litter the bargain bins.  Of course, in order to take advantage of the savings you need to be able to read Kanji or get a translation patch and play through a Retron 5. 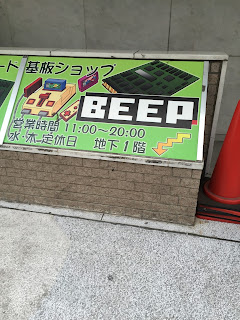 There was a little basement store called "Beep" that I found out about on a FB group.  It was really tiny, so much so that if someone were standing in an aisle, you could not pass without getting really friendly.  It had a decent PC Engine selection, but mainly it was arcade parts and PCBs.  I'm not really into buying arcade boards, so I moved on.

The next stop was perhaps the best.  It is called "Friends" and is very difficult to find, even with a map.  It doesn't have a store front, and you have to go into a building and up a stairwell to see the sign.  This place has loads of games and reasonable prices.  Again, no pictures were allowed but trust me that this place is exactly what you want to find in a retro game shop.  The lady behind the counter was very nice, and everything was neatly arranged on display. 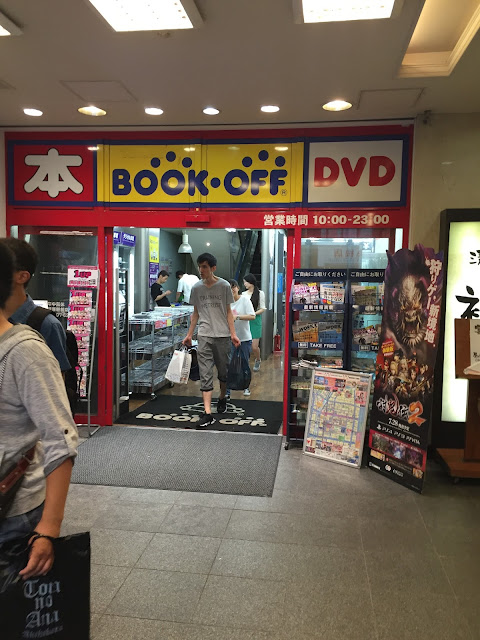 Lastly, I stopped into "Book-Off", a second hand book and media store.  This place reminded me of a chain here in the midwest called Half PriceBooks.  There was a fair amount of 5th and 6th generation stuff, but the cartridge games selection was pretty thin.  There was a bargain bin in the back left that had Famicom and Super Famicom carts, but nothing too enticing.  The majority of gaming product that they had was relatively modern.  I went to another one in Kyoto, and noticed the same thing.

So what did I get?
Overall, I found that Friends and Trader had the best prices, and Super Potato was neat just to experience.  Mandrake was lame, and Beep was a bit too niche for me.  If you are ever in Tokyo, you should really make the trip to Akihabara; its easy to get to and tons of fun.

Re-organization and Shelving of the Collection

For some, part of the joy of retro game collecting is the organizational and display aspect.  Obviously playing the games is top priority, but there is something to be said for how you organize, store, and display your collection.  Over the past decade, my game collection has undergone several changes, based on the logistics of quantity, space, material, and preference.  At this time my collection has undergone another shift, and my means of shelving has changed.

In one of my earliest posts, I discussed my collection and organization.  At that time, I was using the Atlantic Oskar 1080 media shelves for my cased SNES and Genesis carts.  My NES carts were in another vertical media stand.  Along the broad wall of my game room were six Ikea floating cd shelves (now discontinued).  I had a rather large cd collection after college, and the vast majority of it reflects that time period.  There was some wall space that had a framed Guided By Voices poster above my stereo, that I always felt could have been put to better storage use.  Lo and behold, as I was poking around Craigslist I ran across six more of the same exact floating shelves, for five bucks apiece!  With these, I was able to fill in the wall with matching shelves.  I then transferred my cds from the floating ikea shelves to the atlantic media media shelf.  This freed up the ikea shelves for my cased cartridges. 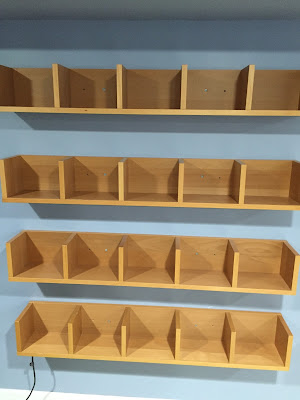 Now normally this may seem like overkill, but since I have invested in housing my carts in reproduction cases, there is significantly more space needed. 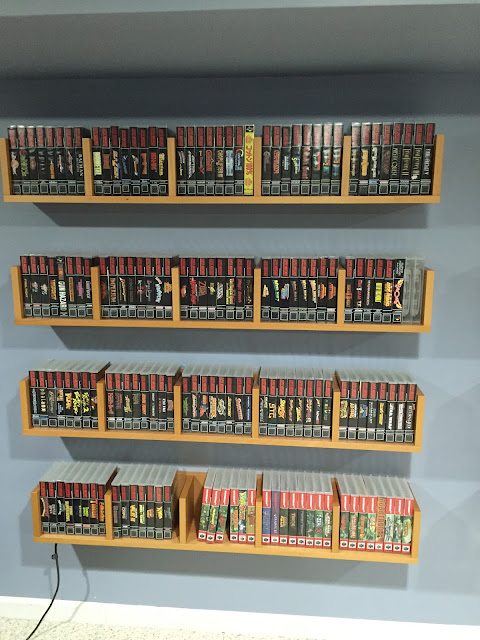 SNES carts in universal game cases and covers from thecoverproject.net fill in the first bank of shelves. 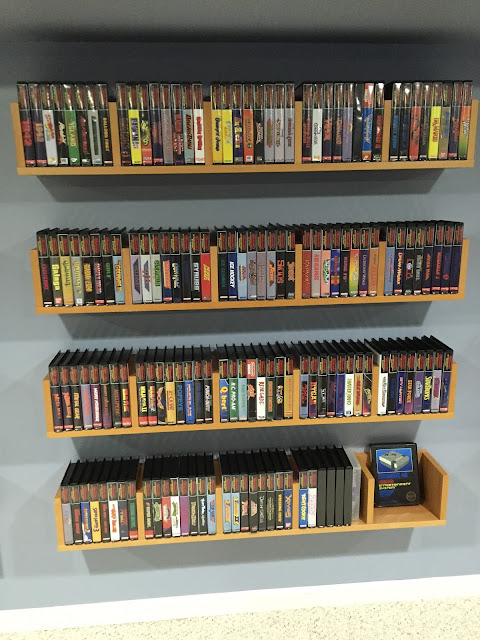 NES carts in Bitboxes from stoneagegamer.com take the middle bank of shelves. 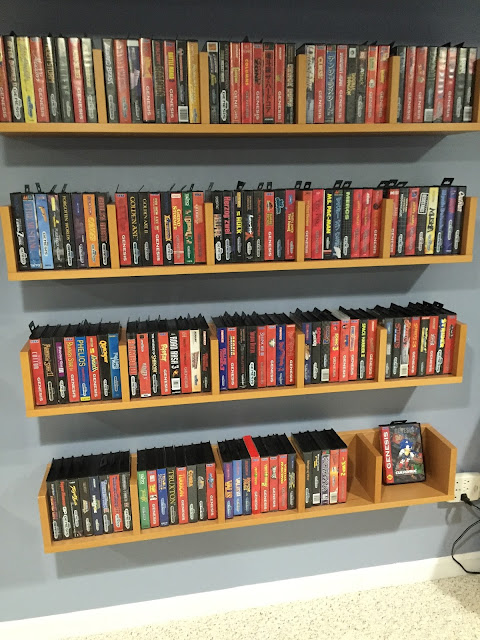 Genesis games in original clamshell cases round out the final bank of shelves.  Not all of the covers are original, in fact most aren't.  The majority of carts were purchased loose.  I purchased cheap sports and filler games in bulk from online auctions on the cheap, and printed covers for the games I wanted to encase.

Altogether, I like how they turned out, and how I have just the right amount of wiggle room left in each.  I feel that I have most of the games that I want, and so my rate of acquisitions has slowed (thankfully) to a crawl.  I can focus on enjoying what I have, knowing that even though they are all on the order of 25+ years, hopefully they will last that much longer.

Of course these are just my carts; my disc-based games are stored in a media cabinet with shelves opposite of the bank of shelves.

When closed, the cabinet looks nice and tidy. 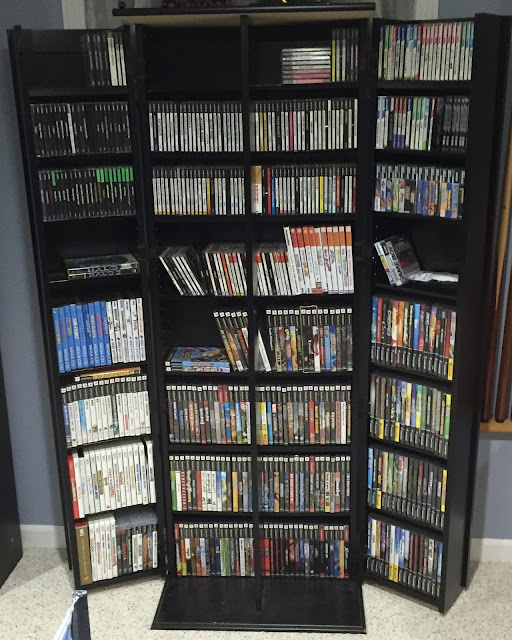 When open, the games can breathe and be perused. 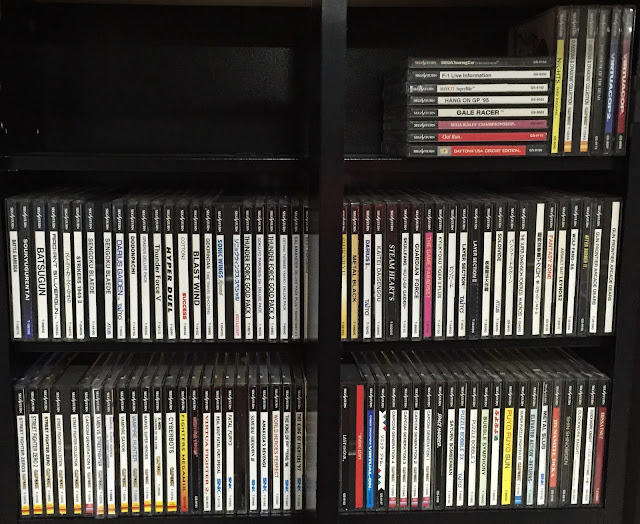 The center top rows are my import Saturn games; mainly shooters and fighting games.  These shooters are the pride of my collection.

The center middle is host to my Dreamcast games.  Domestic games to the far left, Japanese imports in the middle, and both in dvd cases to the right.  Not my favorite console, but some of the DC shooters are my favorites, like Zero Gunner 2 and Under Defeat. 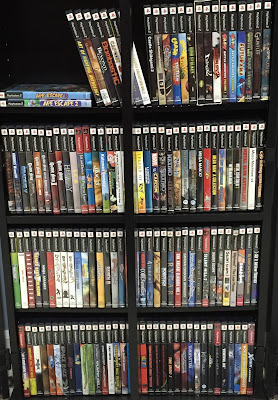 The middle to bottom of the center are my PS2 games.  The PS2 is not my favorite system, but there were so many games released for it.  Gradius V, Metal Slug Anthology, R-Type Final, and Contra Shattered Soldier are my favs. 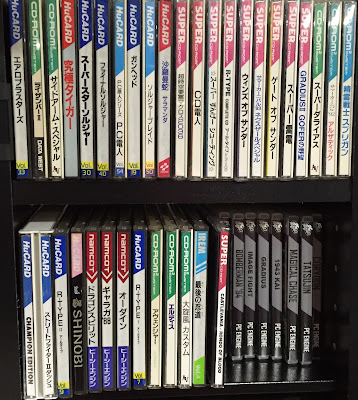 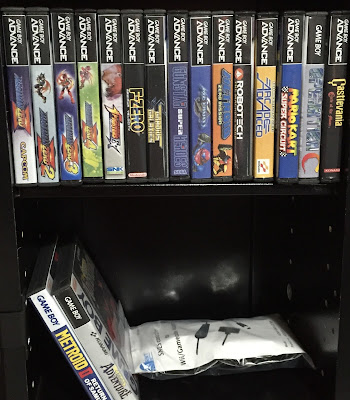 My Gamecube collection rounds out the right side.  I have really started to appreciate this system of late.  I just wish I had the component cables. 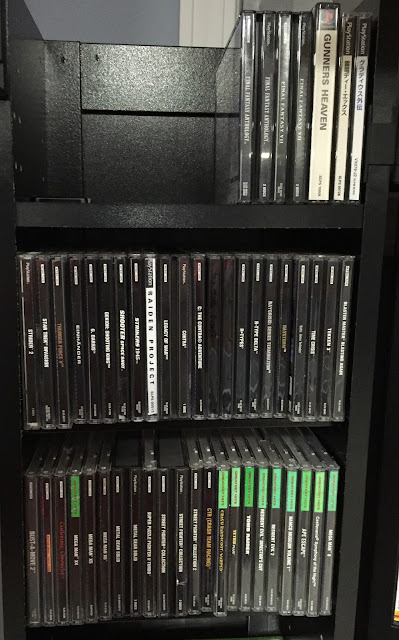 The top left of the cabinet is my Playstation collection.  Some great shooters here, but the early 3D visuals were a bit of a barrier for me to really get into.  I have three import games: Gradius Gaiden, Raiden DX, and Gunners Heaven. Note that Raiden Project was originally a long box game, but I just printed out a jewel case cover for it. 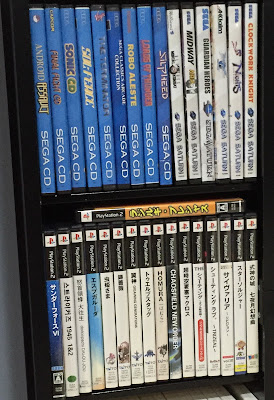 The middle left is where I keep my Sega CD, Domestic Saturn, and Japanese PS2 games.  I have never liked the oversized Sega cases, so I sold the few that I had and just printed some repro covers in standard DVD cases.  Notice how my Japanese Saturn collection dwarfs my American collection?  That's what I think of the library that they released here.  I don't think I'm alone in thinking this, but the Saturn might have had a fighting chance if some of the Japanese exclusives were released worldwide. 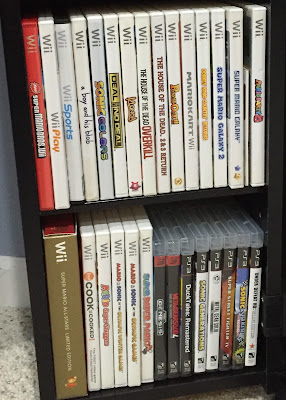 The bottoms left is for my "modern" games.  Most of the Wii games are for my kids. 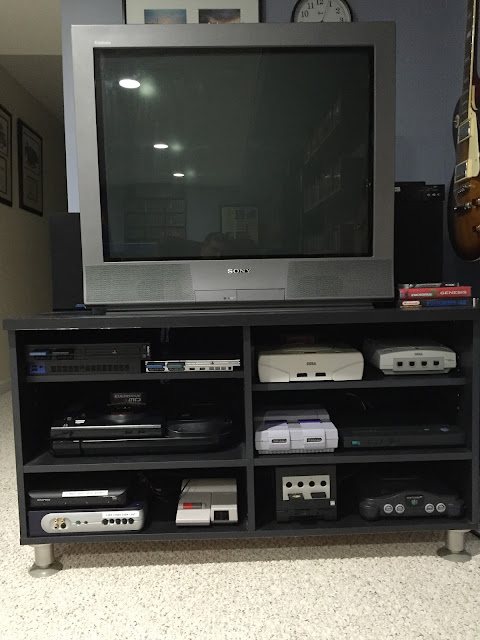 My beloved Sony Trinitron Wega.  I hope you never die, because I don't want to have to move you ever again.
Top row, left to right: fat PS2, slim Japanese PS2, Japanese Sega Saturn model 2, Dreamcast with Region free bios.

Well, that is that for my collection.  As my taste evolves, I trim and prune the collection here and there, and tailor it to my preferences.  I really try to keep the overall numbers down, and if I feel like it is out growing my space, I weed out more nonessentials and setup a sale on eBay.  As of now, I like how everything fits, and there is a sense of necessary containment that is important for family reasons.  Who knows, maybe in a year I will have an entirely different setup.  I guess it will give me another thing to write about.