Game Compilations for the PS2

The sixth-generation console wars put up quite the fight, and gamers were the winners.  The three-way war led to better exclusives, competitive pricing, and unprecedented choices.  Between the three major players (sorry, Dreamcast), I chose the PS2. At the time, a DVD player was just as expensive as a PS2, and so having two for the price of one was a huge selling point.  Add to that the backwards compatibility with PS1 games, and this was a no-brainer.

The Playstation 2 is the top-selling game console in history, selling over 170 million units worldwide.  This number is unlikely to be topped, but who knows. The number of released games for it is equally impressive: over 3,784 games, according to a prominent online source.  With a PS2 unit entrenched in that many homes, the opportunity to cash in on game compilations was ripe.  Many publishers with revered back catalogs saw the convergence of technological opportunity (capacity on DVD Roms) and nostalgia, and gamers were happy to pony up.

Here are the compilations released for the PS2 in North America that I have.  Disclaimer: I'm sure that I don't have all of the game compilations for the PS2; these are just the ones that I own. 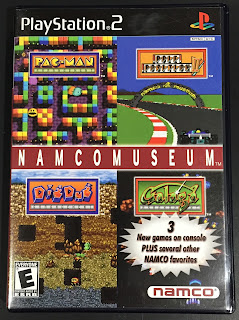 Namco Museum
One of the first on the acrade scene, Namco made its mark with is Marquee franchises: Pac Man, Pole Position, Galaga, and Dig Dug.  There are others, but these are the ones that you remember.  There were a slew of releases for the PS1, over five different volumes, I believe.  They must have really stretched their catalog out to do that. When I look at this collection, what I see is 10 games on a disc, but only four that I want to play.  Don't get me wrong, they are good games, but they are so old school that you feel it. 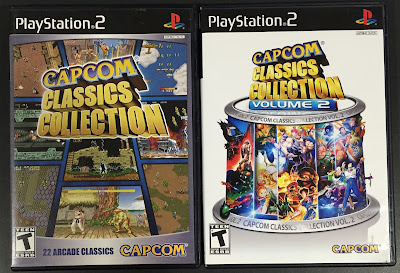 Capcom Classics Collections 1 and 2
These complilations assemble many of the same games that were included in the Saturn and PS1's Capcom Generations series (Japan, PAL only) and threw in a few more games.  The first installment has some of Capcom's most popular games such as Final Fight, Ghosts n' Goblins series, 194X series, Commando series, and of course, the Street Fighter 2 series. The second treatment offers some deeper cuts of Capcom's catalog, competent games that didn't make as big a splash but beloved all the same. Highlights include 1941: Counter Attack, King of Dragons, Knights of the Round, Magic Sword, and Strider, among others.  Various unlockables are present with each game, and the presentation is pretty good.

Midway Arcade Treasures 1, 2, and 3
Midway's pedigree is in the arcades, and so these three volumes offer very nice ports of some big-name games.  Volume 1 includes Defender, Gauntlet, Joust, Paperboy, Rampage, Robotron 2084, Smash TV, and more.  The presentation in the first collection is the best, with an anthropoly-themed menu and hieroglyphics to represent each of the games on the select screen.  They subsequent titles dropped that for a plain menu system.

Volume 2 picks up after the first collection with APB, Arch Rivals, Gauntlet 2, Mortal Kombat 2 and 3, Narc, Pit-Fighter, Total Carnage, and more.  The game play is generally pretty good, considering that some of these arcade titles are not native to consoles.  Playing Smash TV and Total Carnage with dual analog sticks is pure bliss, unlike the awkward methods employed for the 16-bit iterations of those games. 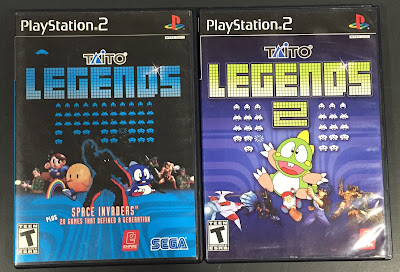 Taito Legends 1 and 2
Taito was also a major player in the arcades during the 1980's and 1990's, and it seems that is how they broke up their selections for these two compilations.The first disc contains their earlier efforts like Space Invaders, Elevator Action, Operation Wolf, Rastan, Raibow Islands, Bubble Bobble, and some other lesser-known entries.  The second disc boasts a robust nearly 40 games, with some real gems in Elevator Action Returns, G-Darius, Darius Gaiden, Raystorm, Metal Black, Growl, and others.  Some of these games are cost-prohibitive on the Saturn, so this is a great alternative for Saturn shooter fans. 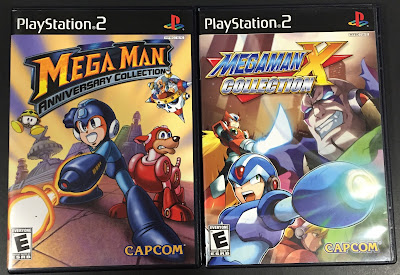 Mega Man Anniversary Collection
This was one of Capcom's best decisions during the PS2 era.  The first eight original series games on one disc, plus two extras that never saw the light of day in North America (Megaman: The Power Battle and Megaman 2: The Power Fighters).  Some features include the ability to save games, an onscreen directional hint telling you where to go (not that useful), and the Megaman cartoon pilot episode.  Some of the music has been altered slightly; some for better some not, and the control is pretty tight, but depending on how much muscle memory you have from the original NES games, it may feel too different, as in my case.  Nonetheless, a great compilation.

Mega Man X Collection
Here we have the first six entries in the X series, and included here is the previsouly unreleased (in North America) Megaman Battle and Chase racing game.  The X series is not as uniform in quality as the original series, with some big drop-offs in X4 and X5, but still, a collection of some incresingly expensive titles on one disc makes this compilation worth it.  There are not a lot as far as extras, ans some people care more about that stuff than others. 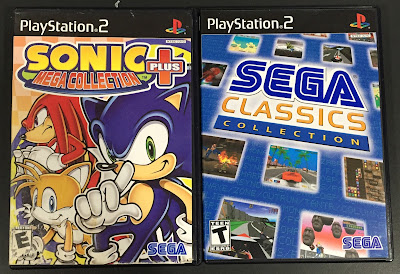 Sonic Mega Collection Plus
This collection has all of the 16-bit Sonic games, plus the lock-on combinations with Sonic and Knuckles, and four more Genesis games: Ristar, Flicky, Comix Zone, and The Ooze (previously unreleased in North America).  As long as you like Sonic, this could be one of the most complete collections that I've seen for a series (I'm ignoring the 3D Sonic titles).

Sega Classics Collection
This is an odd collection.  On the surface, it looks like a collection of Sega arcade classics, but if you dig deeper, these games are not the same as you remember.  They are modernized (I use this term lightly) versions of arcade classics, developed by third parties.  The games are reinvented in 3D, with polygons instead of sprites, yet done so on the cheap.  These titles were released separately in Japan as part of the Simple 2500 series (budget line), and were bundled together for this release in North America.  The new take on the games does not meet expectations when you think of Sega, nor does nostalgia kick in because the games look and play differently from the originals. 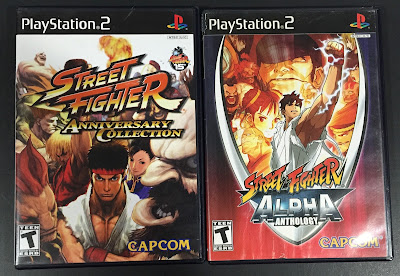 Street Fighter Anniversary Collection
This collection contains two games: Hyper Street Fighter 2 and Street Fighter 3 - Third Strike.  Also available is Street Fighter 2, the animated movie.  This is a nice collection, as it is the only way to play these games on the Playstation 2.  I prefer an arcade stick for fighting games, as I find the d-pad on the indigenous controller uncomfortable. 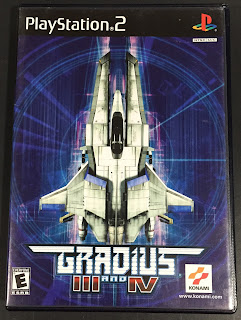 Gradius III and IV
Gradius III was a near-launch title for the SNES, but here is the arcade port, slowdown and all. Gradius IV has never been released before, and the it makes its debut here as a launch title for the PS2. The graphics are reminiscent of PS1 game, with its early 3D models.  The gameplay is basically the same as what you would expect, but less fun for some reason. Maybe its that the game seems half-baked, or maybe it just doesn't have enough of its own personality.  Either way, its a rare skippable entry in the renowned series.


SNK had a huge Neo Geo catalog waiting for the right moment to be unleashed for other consoles, and the PS2 was the prime opportunity. The collections include: 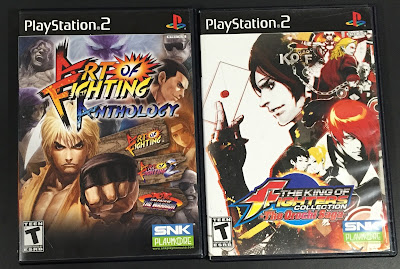 King of Fighters Orochi Saga
The KOF series has so many entries, its comical. This compilation includes KOF '94 through '98.  I have played the first three on the Saturn, and they are fun, but I just can't get into them as much as I want to.  Maybe because I suck at fighting games not by Capcom.  Still, a fantastic collection for those who can better appreciate them than me. 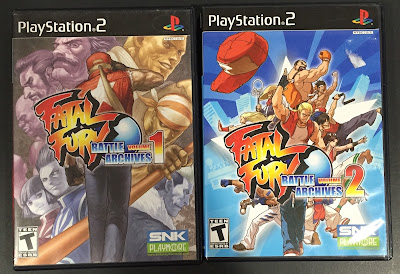 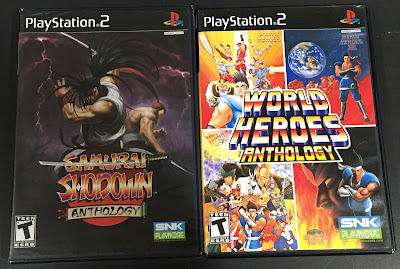 World Heroes Anthology
Bringing together World Heroes, World Heroes 2, World Heroes 2 Jet, and World Heroes Perfect, this fighting game with a time travel back story has the most interesting characters and locales.  Many of the fighters are based on actual historical figures, and the series quietly did well in the arcades. 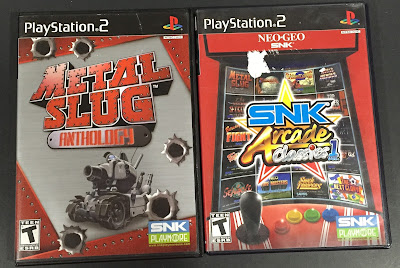 SNK Arcade Classics 1
Given how many Neo Geo titles were produced, this is a nice sampling of a bit of everything. Metal Slug, Baseball Stars 2, Magician Lord, World Heroes, King of the Monsters, Shock Troopers, Samurai Shodown, King of Fighters '94 and more are offered up as a cornucopia of SNK arcade goodness.  A great place for SNK newbies to start.

Metal Slug Anthology
This is what I am talking about.  Metal Slug has an abundance of character, more so than any other game that I've seen. The action is frenetic, the animations are hilarious, and challenge is commendable.  To have the first six entries plus Metal Slug X on one disc is mind blowing.  If you can't already tell this is my favorite SNK series.

I'm sure there are many more compilations out there, and maybe I'll stumble across those as well.  I am a huge fan of compilations; the value, the exposure to an entire franchise, and the special features are all reasons why.  If I missed any good ones, let me know! I'll be on the lookout for them.