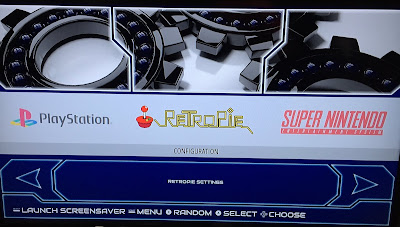 When it comes to emulation, there are a multitude of platforms to choose from. You can emulate on PCs, broad band devices like the Nvidia shield, single board computers like the Raspberry Pi and Odroid, min-consoles like the NES Classic...the list goes on. One of the first thing someone does once they decide to emulate is to seek out the roms for games. These have been made available online for years for every platform. Not only can you find almost any game you are looking for, you can download complete sets of roms. It is crazy to think of how far gaming has come in the past 30 years. If you told 10-year old me that I could play every single NES game ever made, I would have flipped out. This would be anyone's reaction who grew up in an era where video games only came at birthdays and holidays.

As a kid I remember spending summer days on end, mapping out Brinstar in Metroid (only to find that I messed up my map and had to start over), replaying Punch-Out!! to learn the nuances and tells of each boxer, and replaying Contra over and over again, to the point where I no longer needed the Konami code. With few games and seemingly infinite time, we were up to the NES challenge.
Fast forward to today, and now we are adults with responsibilities and families. For people like you and me, who still have interest in retro games, finding time for a hobby among life activities is a challenge. When time does present itself, it comes is swaths of 45 minutes to an hour. There is not enough time to take on the challenge of longwinded games like RPGs or simlar adventure games.
As a result, I find myself exploring newer games less and less frequently. My instinct is to gravitate to the old classics. They are like comfort food: enjoyable and satisfying, if not flashy.


With retrogaming at peak popularity, there are vendors looking to cash in, selling pre-made emulation solutions on eBay, Etsy, and so on. They will advertise how their setup contains complete sets of every platform, containing thousands of games. This sounds good, because isn't more better? I understand that these will sell because most people are not interested in investing lots of time in learning how to do this; it is worth paying the money to have it readymade.

When I built my first RetroPie image, I loaded it with just the games that I physically owned. As I tinkered more, I started to embellish with more and more roms, eventually using entire romsets. It sounded like a good idea at the time. What happened was I found myself spending more time skipping through pages of games just to get to my same old favorites. There were just too many games to wade through. I knew I wasn't going to play all of them, so what was the point in having them clutter up the game lists? I decided that less was more, and I learned to value quality over quantity, as I did with collecting physical games. Even though it doesn't cost any less to fill an SD card with fewer games, I find it to be a more appealing approach. Its the same idea as a greatest hits list for a certain band. When you want to listen to a band, you have a few songs in mind, you don't want to scroll through their entire catalog. Here's another crude analogy: imagine going to a buffet where there were only 50 items, but you loved every single one. Wouldn't that be a better experience than a buffet with thousands of items? 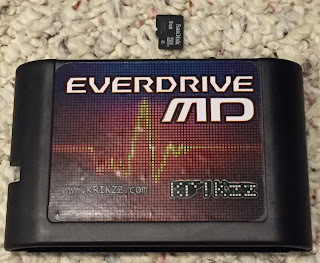 When I have a longer period of time to play, I prefer to do so on original hardware. Often I will use an Everdrive cartridge if I don't feel like plugging carts in and out. Similar to emulation, entire romsets are the norm with these as well, since they fit on standard SD cards. I decided to make a few extra folders in my root of the Everdrive SD card, that contained only my favorite games, organized by genre. I still have the entire set of roms on the card, they are pushed back in a different folder and I can call them up when I need to try something new, but for 90% of my Everdrive usage, I like to have short lists.

It is easy to forget how much shovel-ware there is for each system. Licensed games have a reputation for being terrible, and rightly so. Publishers looking to cash in on a recent movie or toy trend will put out anything, hoping to dupe kids out of their money. These games plague every console. I'd just rather leave them off, and reduce the amount of scrolling and searching when I want to call up a game. Perhaps the worst offender is the Wii. There was a point in time where I'd swear that there were more food item related games on the Wii than there were total games on the N64. This may be hyperbole but you catch my drift.


When Nintendo released their classics line of min consoles, there were people who felt like more games should have been included. After all, 20 or 30 games preloaded doesn't sound like much considering there were hundreds of games released. I think they got it right. A product that contains 30 games, and at least 25 of which are universally admired presents better than a product with hundreds of games, where the average person only knows about 50 or so.

So what do you think? Do you prefer full romsets? Do they bother you like they bother me? Let me know your opinion, and I hope you enjoyed reading this. 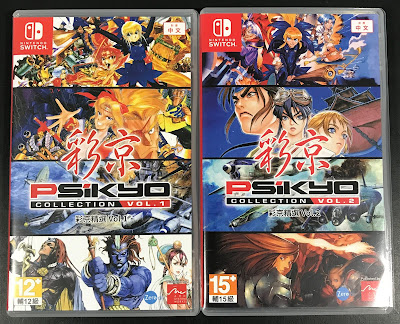 Developer Psikyo is not a household name to gamers, even retro gamers. They mainly produce 2D shoot'em up games like Strikers 1945, Gunbird, Cannon Spike, and Zero Gunner, to name a few. These games are some of my favorites. The company's previous incarnation was Video System Inc., and they produced the Aerofighters series. If you play an Aerofighters game and then play Strikers 1945 you will immediately see the resemblance. 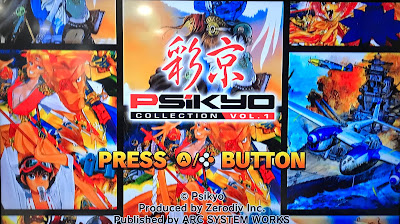 While hard core shoot'em up fans may deride the Psikyo games as too simple, I find them to be perfect. My appreciation for shoot'em ups is a bit different than that of the hardcore shmup fan. I find many modern shoot'em ups to emphasize the sheer number of bullets, resulting in a tapping strategy that is claustrophobic. Old school shooters rely on waves of popcorn enemies, environmental hazards, and lack of weapon power. Psikyo strikes a balance right in the middle. I like the Psikyo games because they are a blend of old school aesthetics with lots of action, minus the blinding clouds of bullets for the sake of having clouds of bullets.

A common trait that Psikyo shooters have is the charge shot, bomb/defense attack, and power up system. Once you pick up a power up, you increases your firepower and gain an option that has its own unique attack. Some fire missiles, some fire lasers, some drop bombs, some home in on enemies, etc. When you hold the shot button, you charge a shot. Every plane/character in these games has a unique charge shot and vary in power. Some are more powerful but take longer to charge, for instance. The bomb attacks all have some defensive aspect, like ascending up into the sky briefly to drop an enormous bomb, or calling in a calvary of support craft that create a defensive barrier for you.  The replay value increases tenfold due to trying out all of the characters and their attack patterns.

Another feature that is in all of their home ports is the ability to customize the game settings, such as number of lives, difficulty, etc. This makes the games far more approachable to newcomers (try the monkey setting!) while still offering insane difficulty on the higher settings. 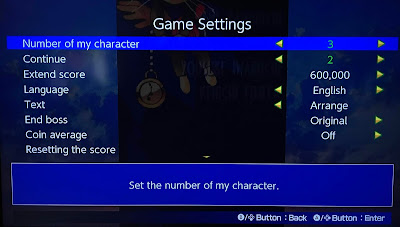 In recent years there has been a resurgence of retro collections for modern consoles. Psikyo decided to get in on the action and release two collections for the Nintendo Switch. Each collection has four games. 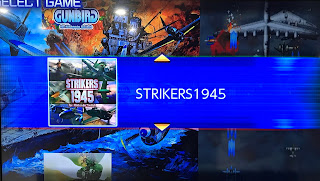 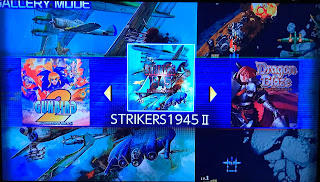 Each collection is about $35 USD. To be honest I think all eight of these could have been in one collection, but the developers have to eat, right? I would have paid the price of a modern game to get all of the games in one package, and I think everyone in the target audience would do the same.

This is all great, but there's a snag: the games are not released domestically. They can be purchased from Playasia.com. It's a reputable online company, I've ordered from them in the past and had no problems, but you are subject to lengthy international shipping times.

The gameplay is pretty faithful to the ports on the Saturn and Playstation. I haven't played the original arcades so I can't comment on those. The accuracy is inherent in the simple gameplay design. The games are simple enough, that there's not too much to screw up. I don't mean simple in a derogatory sense, I'm just commenting on the complexity of the programming. I think this is a shining example of simple is better. 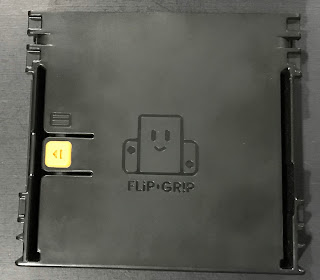 Currently the collection is a Switch exclusive. I would have preferred it on the PS4. There is one fantastic feature that the Switch takes advantage of: Tate mode. Since these were all originally arcade games, they were designed with a tall vertical orientation in mind. This can be experienced to its potential by using a Flipgrip adapter. This fantastic accessory allows you to rotate your Switch screen 90 degrees, and reattach your joycons so that you are in Tate mode, and fully utilizing all of the screen. I don't know if Psikyo knew this was a thing, and kept that in mind when porting the games, but it is a game changer. I have never been much of a fan of hand-held systems, but this is changing my mind. 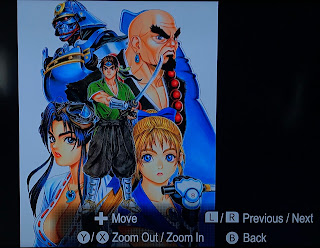 The only real extras in the standard editions are the gallery modes, which contain cover art, adds, and arcade instruction stickers.

So these collections are intended for shoot'em up fans that own a switch, and are willing to import. Many of these games have been ported to the Saturn, Playstation, and PS2, but primarily in Japan. Some have never been ported to anything at all.

If I have one complaint, its that the Switch had only analog sticks and no directional pad. For 2D games like these, I prefer the precision of digital input over the unnecessary analog input. I looked into the d-pad joycons on the market, but they need to be connected to the Switch directly, as they do not support Bluetooth connectivity. This means I can't use them with the Flipgrip or while hooked up to a TV. Bummer. 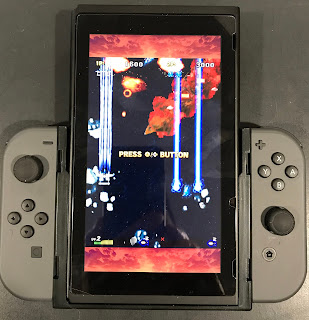 Playasia has announced a Shooting Collection Volume 3 to be released this summer, which will contain Strikers 1945 III, Gunbarich, Sengoku Cannon, and Zero Gunner 2. I think this will be the final collection, as that's about the extent of their meaningful catalog (unless you want to delve into mahjong games). I preordered this as soon as I heard about it.

Right as this post is published, I see that Psikyo is reshuffling all 12 (4 from each shooting collection volume) games into two "shooting libraries" that contain 6 games each. This is odd and annoying. Good news for people that did not take the plunge yet, but bad news for people like me who already purchased volumes 1 and 2. That's beside the point, I guess.

All in all, I love the Psikyo Shooting Collections, they're a great way to experience the shooters from this under-the-radar developer. Highly recommended!