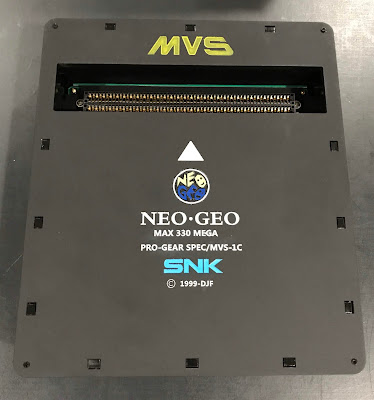 The Neo Geo MVS (Multi Video System) was an arcade system developed by SNK. It was dubbed a 24-bit system, although the exact categorization of its architecture is not that simple. Regardless, its games were on par with or better than current arcade offerings at the time, and most definitely more advanced than any home console offering.

It had multiple games to choose from, thanks to its multiple internal cartridge slots. A single arcade cabinet could house up to six games for a player to chose from. When games were no longer making money, newer games could be easily swapped out at a fraction of the cost when compared to replacing an entire arcade cabinet. This versatility made it popular with arcade owners, and so arcades everywhere had the big red MVS cabinets.


SNK eventually released a home console version, called the Advanced Entertainment System (AES), which was essentially the same hardware as the MVS, with a single cartridge slot. The system cost around $700 at the time and games were about $200 each!

Even though the console and arcade hardware were the same, the game cartridges for the home system and the arcade system were not directly compatible due to different pinouts. The MVS arcade cartridges are cheaper, as there were more of them produced than the AES home versions.

Growing up, I only knew one kid with a Neo Geo. Its price point limited the audience, which was a business decision. SNK gambled on their premier home console being so advanced and captivating, that it would attract the attention of hardcore gamers. They were mostly right, as the home console had games released until 1997, and the arcade had games being released for it up until 2004.

The Neo Geo games library was focused on 2D action games, and not capable of 3D graphics. Still, it occupied a niche market with a love of 2D sprites, and had a cult following to this day.

It never occurred to me that owning a Neo Geo system was possible. It was just as absurd as wishing for a Lamborghini; there was just no way it was going to happen. Even years after its heyday, Neo Geo systems with hookups and a controller command upwards of $400 on the secondary market. That's not even taking into account the cost of the actual games. I resigned to accept the fact that only way I would play Neo Geo games was through emulation. Metal Slug is one of my favorite games, and it is a staple of game night when friends come over. Playing on it on RetroPie is fine, I guess.

One day I was watching a YouTube channel called RetroCore. Its a fantastic channel with deep dives into hardware and game reviews. The CBox MVS system was reviewed, and I was captivated. Apparently, there was a company in China that was harvesting the motherboards from old MVS arcade cabinets, and making home consoles from them. The production was fairly well designed, with a decent attention to quality. Mark Smith from RetroCore gave it a favorable review, and my interest was piqued. The price point is spot on, with these units costing roughly $175, not including shipping. This may not seem cheap, but this is a Neo Geo we are talking about.


What really attracted me to this specific console was the controller compatibility. These units are compatible with the almighty Sega Saturn controller! I am a huge fan of the Saturn pad, and this is a revelation. I don't have issues with the original Neo Geo arcade stick, but when given a choice, there's no contest. This was shaping up to be an awesome console.

There is a multicart that is widely available for the MVS, and it can even be ordered along with it in the same order, which is the route I went. It contains 161 games, but many of those are hacked versions of the games, so in reality there are about 94 games on it. That's not bad, considering it costs about $75 for the multi cart, and it sure beats taking out a second mortgage to start collecting actual games.

The console has the Neo Geo universe bios installed, meaning extra game playing options, settings, and cheats are preinstalled. Installing this yourself would require some precision soldering, which not everyone is comfortable doing.

So I decided to liquidate a bunch or unneeded peripherals, controllers, and unwanted games through eBay. I made enough to more than cover the cost of the consolized MVS and multicart. I ordered it from aliexpress. Shipping from China is a bummer, as expected. There was a $2 difference between their standard shipping and premium shipping, so I figured why not? The estimated time for delivery was 10-15 days. I got mine in 6 days! They sent it via DHL, which is odd, since I didn't pay for the DHL delivery, so maybe they messed up?

There are three video output options: S-video, RGBs, and component. I hooked it up via RGB scart, using a high-quality Genesis 1 scart cable. It is important that the scart cable contains the 470 ohm resistor, like the ones sold by Retrogaming Cables or these from Retro Access. If you use a cheap scart cable you might fry your upscaler!

It is run through a switcher, and into the OSSC line multiplier. The picture quality set at 5X integer scaling  is everything that I hoped it would be. I applied scanlines, and playing these games on original hardware with no lag using Saturn controllers is absolute bliss.

Now, I'm totally new to the Neo Geo, and I'm sure there are hardcore fans of the system that my not be fans of this console, and that's fine. For people like me who are just happy to be able to finally have a cost effective solution and be able to play original hardware, using a Saturn controller, this is a perfect solution. Maybe more people would like to know that this exists. I highly recommend it!