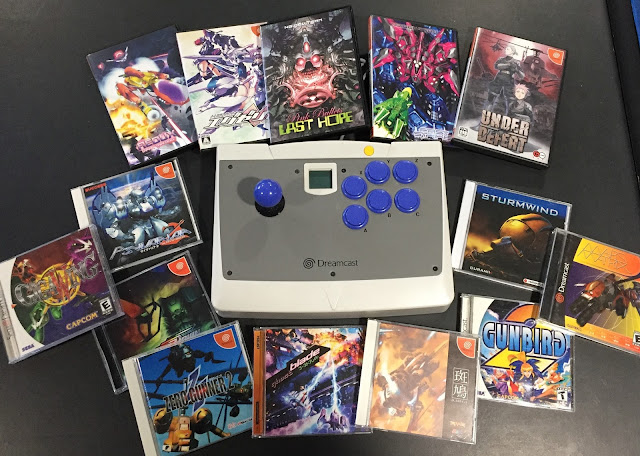 The Sega Dreamcast did not have the same volume of shoot'em ups as its predecessor, the Sega Saturn. The number of releases in the genre are few, not just for the Dreamcast, but for the sixth generation as a whole. Consider also that at the time, 2D games were considered antiquated, and not impressive enough in the refined age of 3D polygons. Thus, shoot'em ups were no longer a reliable sale for publishers to take a chance on.

However, the Dreamcast still has a loyal following, and indie games are still being produced to this day. Developers like G-Rev have released nearly all of their catalog after the death of the console, without official sanction. Some of the games on this list are Japanese exclusives, so a disc swap method or region mod is necessary. Disclaimer: this is my personal list, and due to the highly individualized nature of opinions your list will obviously differ from mine. So be it! 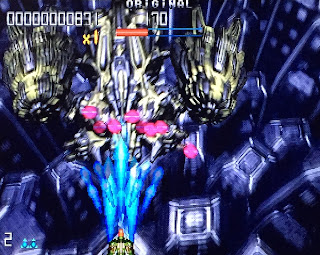 10 - Fast Striker
A relatively straight-forward game, this embodies the modern concepts of bullet hell. Tons of bullets litter the screen, changing shot type from a spread pattern to a concentrated shot also changes your ship speed, ala Dodonpachi. The background visuals are on the dark side, to suit the space/mechanical aesthetics, while the bullets are all bright and neon, and easily stand out. Interestingly, it sports a full screen, which is not as common for a vertical shooter. Selectable  difficulty levels help ease you along if you're new to the genre. The screen-engulfing fire bomb is very satisfying. A good entry point and solid game. 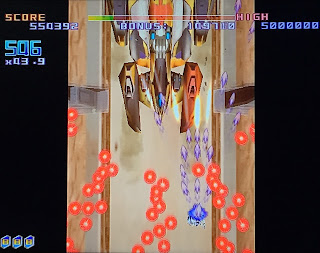 9 - Psyvariar 2
A shooter where you pilot a choice of mech, this game utilizes the "buzz" mechanic, where you shot power increases if you are grazing enemy fire. You can play this conservatively, and just try to survive, but your default shot is pretty weak and enemies will eventually require several hits to take down. Boss battles exemplify how this mechanic is best used. Your mech has a tiny hitbox, which is helpful, but hard to get used to; it feels like I'm about to take a direct hit, only to fly by harmlessly.
The powerful spinning shot when buzzing multiple bullets is satisfying, a reward for taking risks. 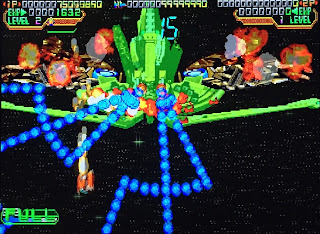 8 - Mars Matrix
Mars Matrix is a frantic bullet hell shooter with a few unique mechanics. Tapping the fire button produces a typical vulcan shot. Holding down the button fires an electric piercing shot, which is pretty powerful but risky due to its short range. Holding the button for half a second generates a magnet shield of sorts, which when released reflects all enemy bullets back and it pretty satisfying.  Its not not for the faint of heart. This game is pretty difficult at first, but eventually you learn to anticipate when you'll need to charge up the shield, and what bullet gaps will allow you to do so. 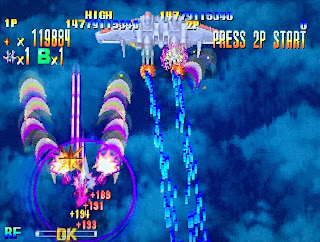 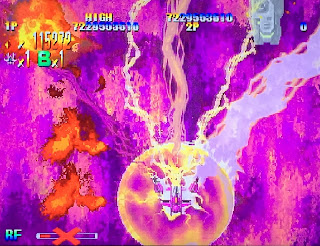 7 - Giga Wing
Giga Wing is another frenetic bullet hell style shooter. It has a reflector shield mechanic, not unlike the one in Mar Matrix, that absorbs then shoots back enemy bullets, with surprising effetiveness, almost the like enemies are more susceptible to their own bullets than yours. The penalty for using the shield is the recharge down time, but at least it gives an audible cue ("OK!") when it is recharged.
The scores are ridiculous (how many zeroes are in that score counter?), and the colors (all of them) are vibrant. This is perhaps a second step for those getting into shoot'em ups, as it takes a bit more of a discerning eye to focus past all of the on-screen chaos and survive. 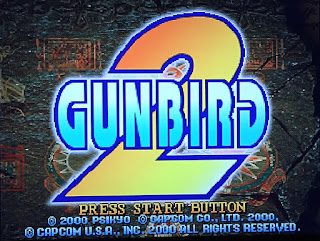 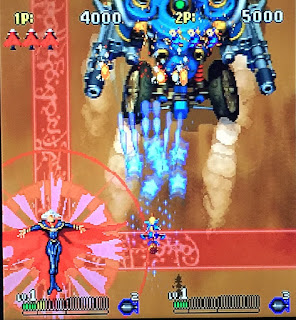 6 - Gunbird 2
A Psyikyo shooter through and through, I probably like this game more than I should due to its similarities to other Psikyo games like Strikers 1945 and Sengoku Blade. In traditional Psikyo fashion, the first couple of stages are randomly selected, giving it a fresh feel each play through.
This game never really get any attention. Maybe its too straight forward, and not inventive enough? Maybe the anime-inspired characters and themes are misplaced in the shooter genre? Who knows.
Sometimes a game needs just basic, solid gameplay, which this has. 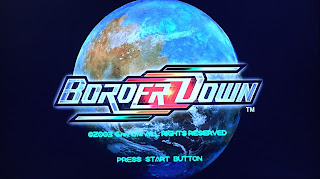 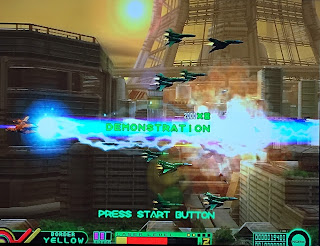 5 - Border Down
The lone horizontal shooter on this list, Border Down employs a unique "Border" system which changes when you get die. When that happens, the border switches from green to yellow, where yellow is a shorter level but enemies are more condensed on screen. If you get hit on a yellow border, you continue in the red border, which is shorter and even more frantic. An interesting concept for sure, but I'm not as enthralled by it as others are. Its still a great game, and worthy of the list. This is one of the posthumous releases for the Dreamcast, developed by G-Rev, who would continue the Dreamcast legacy through other releases. 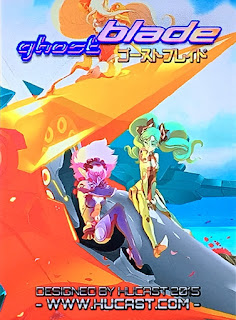 4 - Ghost Blade
A 2015 release by HuCast Games, Ghost Blade is one of the latest releases. So much so, that there is an HD release for the PS4 as well. This game has a lot of similarities to the aforementioned Fast Striker. There's a quick a sense of speed, as the background constanty zooms past. The graphics are vibrantly colored, and the enemy bullets a little less so, making for some unseen deaths. Your shot can be concentrated as your ship slows, a'la Donpachi, or spread wide and weaker.  This mechanic, while derivative, is the glue that holds the game together. A simple concept for sure, but expertly employing it is the challenge. The techno music keeps the upbeat pace throughout the game, and becomes forgettable after a while. This is a relatively easy game, and another good entry point. 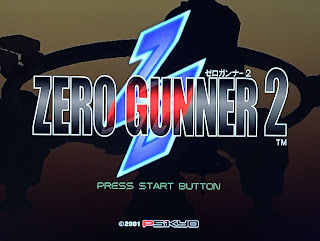 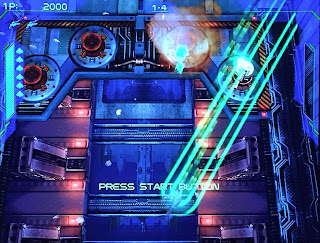 3 - Zero Gunner 2
One of my all time favorites, ZG2 is a helicopter game where being able to rotate and adjust to different enemy directions is key. You can turn in 360 degrees, and firing will lock down your direction. This may take a little getting used to, as it is an uncommon control mechanic, but once you get the hang of it, you won't give it a second thought.
Defeated enemies will drop power icons that you collect to fill your secondary weapon meter. There are three helicopters to choose from, each with its own main weapon type.
The bosses are giant transforming mechs, that present their patterns fairly early, and so you can figure them out relatively easily. Being a Psikyo game, there is adjustable difficulty, which I am a fan of. Really good players play for score or 1 credit clears (1CC), I just try to survive and advance as far as possible. This was just released on the Nintendo Switch, so hopefully more people will get to enjoy it. 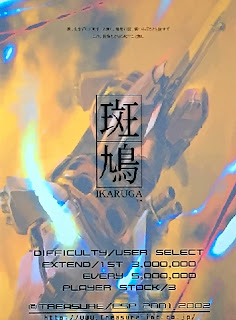 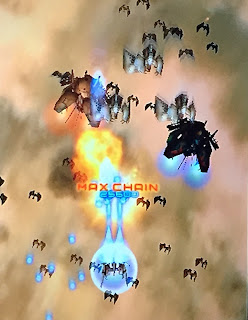 2 - Ikaruga
Otherwise known as Project RS-2 (Radiant Silvergun 2), this gem from renown developer Treasure is highly polarizing (pun intended) amongst the shoot'em up community. Some feel it focuses more on the puzzle mechanic, and thus not a true shoot'em up. I disagree, I feel that it is a fantastically unique game that took a risk and still presents the action and precision that all good shooters have, if not more so. The graphical design, the outstanding musical score, and the intriguing challenge make this a must have for fans of the genre. 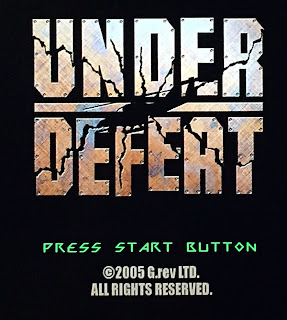 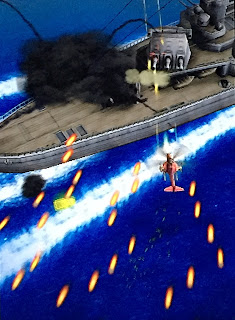 1- Under Defeat
Notice the year on the title screen. Under Defeat is an example of a posthumous revival for the Dreamcast, one of several soon to follow. The game is a splendid combination of traditional, vertical scrolling action, and modern bullet hell patterns during boss battles. Set in some alternative universe that is reminiscent of World War II, the art design is a blend of history-inspired motifs and anime.  Like most shooters that involve helicopters, the controls take some getting used to, which doesn't take long. I found the controls to be more intuitive than Zero Gunner 2, which was mentioned earlier.
The challenge curve is smooth, as anyone can pick up a controller and make it to the first stage boss. Getting past that depends. The sound effects are better than they have any right to be, sounding like they're straight from a Hollywood blockbuster. The bomb is a screen-clearing wave of destruction that is extremely satisfying to employ. There is a minimal power up system, which forces the player to learn the nuances of the option pod for effective attacks. The option pods can fire, from weakest to strongest, a vulcan machine gun, repeating cannon, or heavy missile. After the option has been activated, it fires for a brief period of time and then stops. It needs time to recharge before being fired again, and the stronger the weapon, the longer the wait time. This strategic element of who to fire what at and when gives the game a bit of a resource management quality not seen in other shooters. This game was re-released for the PS3, with a new widescreen mode. I strongly encourage any fan of the genre to find a way to play this.