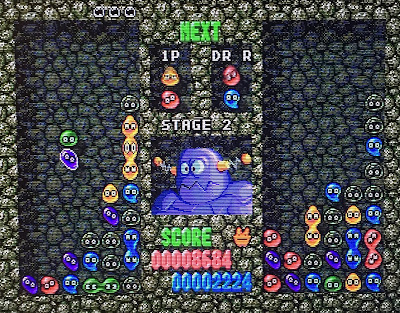 Puzzle games are a staple of every console generation, appearing among the earliest arcade games. You might say the the earliest video game smash hit, Pac-Man, was a puzzle game. The reason why puzzle games are popular is their accessibility. They are generally visually appealing, easy to learn, and addictive. These are the games that you might pull out for people unfamiliar with gaming. When competitive modes are available, they often lead to legendary matches, all night gaming, and some tested friendships. With every new console generation, the puzzle game genre is well represented, by most of my favorites were in the past. Here's my top ten puzzle games, in no particular order.

Bomberman series
Hudson's Bomberman series has a lasting legacy even to this day, spanning from the third generation through today's consoles (eight generation). The gamplay is simple: plant bombs to destroy barricades and reveal the exit, and don't get caught by an enemy or blow yourself up. Power ups make your task easier, but be careful as sometimes your stronger bombs catch you in the greater blast radius. Playing alone is fun, but multiplayer is the true calling of this game. Multitaps allow for up to five players on most consoles, but the Saturn version supports up to ten players! I don't have a Saturn multitap yet, nor ten controllers, but this sounds like a convention experience like no other. 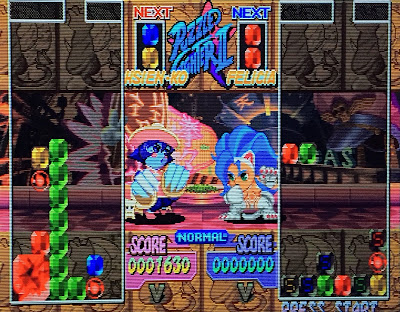 Super Puzzle Fighter II Turbo
In what is a tounge-in-cheek name, Capcom has ribbed itself with parody of its sequel naming conventions and produced a refreshing puzzle game. Gems of different colors fall into the play field, and if you connect like colors they meld together. A swirling ball is the catalyst that will set off the same colored gems. Of course the goal is to bury your opponent in gems. You pick an avatar from the Street Fighter or Darkstalkers universe. Each character has different attack patterns; the patterns of gems that fall on your opponent when you set off chains. 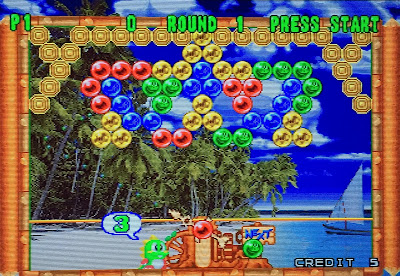 Bust-A-Move series (various)
The series is related to the Bubble Bobble franchise with its inclusion of Bub and Bob, yet the gameplay is its own. Bust-A-Move uses a color matching mechanic to pop bubbles that stick to the ceiling. When three or more bubble of the same color are physically touching, they pop and disappear. Every miss causes the bubble to stick and accumulate. The ceiling drops an inch or so periodically, and adds to the pressure; if the bubbles attached to the ceiling fall below a certain line, the game is over. A ubiquitous Taito arcade game, ported to nearly every platform, it has several renditions with minor, if any changes to the gameplay. The version I played the most is on the Playstation, but it is on nearly every system from the SNES and on. The soundtrack is as sugary sweet as the colors on screen, and if you play for longer than ten minutes, you'll find yourself humming them eventually. Two player competitive mode is just as fun if not more so, as your success contributes to your opponents struggle. 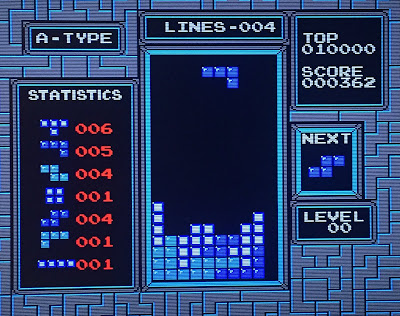 Tetris (various)
The original killer app, Its my belief that the Gameboy's massive success was largely due Tetris being the pack in game. The very definition of: "simple to learn, hard to master". It was the first time I would see adults gaming on their own accord, and not simply appeasing kids with a patronizing few minutes of gameplay. It may be the most popular puzzle game of all time, and its pretty easy to see why. Who knew dropping shapes consisting of four blocks and making lines disappear could be so fun? 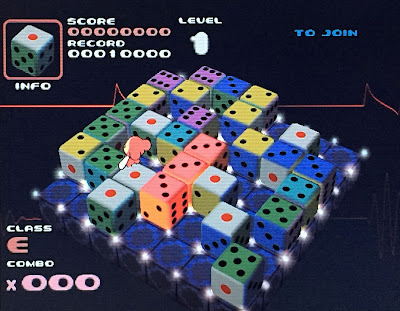 Bombastic (PS2)
Bombastic is the sequel to the Playstation game Devil Dice. The concept is there are dice scattered all over the floor. Your character can walk all over them, and each time he does, the dice turns. Whatever number the dice shows facing up, that is the number of dice that have to have the same number facing up and touching each other in order to detonate. For example, if you turn a die to show a four, then you will need to turn four neighboring dice to show four, after which they will pulse and explode. Two player co-op can be chaotic, as you can cancel your partner's turns if you're not paying attention. Its a blast. 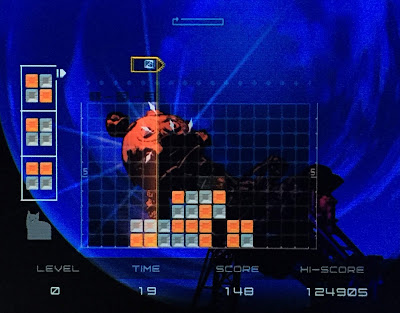 Lumines Plus (PS2/PSP)
I know this game premiered on the PSP, but I played the PS2 port first. You have squares that are made of four tiles. The squares can be any combination of two colors, i.e, all red, one read and three white, two red and two white, one white and three red, or all red. As you drop the squares onto the blocks on the play field, any singularly colored squares or rectangles that form as a result will be eliminated. If your drop results in anything other than a uniform color square or rectangle, it remains, adding to the bulk that may potentially grow. The music is a potpourri of drum n' bass, electronica, techno, and related genres that young party people would have listened to in the mid 2000's. 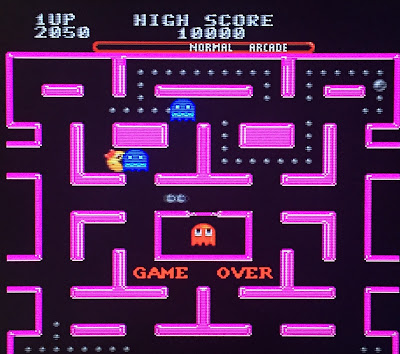 Ms. Pac-Man (various)
There's no need to say much here. Ms. Pac-Man is an institution, a game that has stood the test of time. The home 16-bit ports include the pac booster option, to allow you to move twice as fast when holding the boost button. This added acceleration adds a new element of strategy that is welcome to savvy players who like to take chances. There are also new mazes and game modes, for those who have the original mazes memorized. 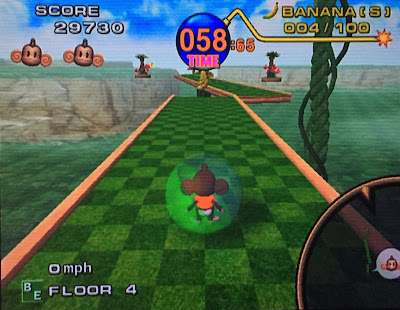 Super Monkey Ball
While not a typical puzzle game, Super Monkey hits all the right notes when it comes to what a puzzle game represents: challenge, physical rules, coordination, patterns, and fun. You roll your monkey in a glass ball through a course, and hopefully you are able to navigate to the end. The course is suspended in air, so if you go off the rails, you plummet. You collect bananas along the way, but don't let that distract you from the ultimate goal of completing the course. This game was released on the Gamecube and PS2, and the analog controls are sublime. Definitely one of the best games of that generation. 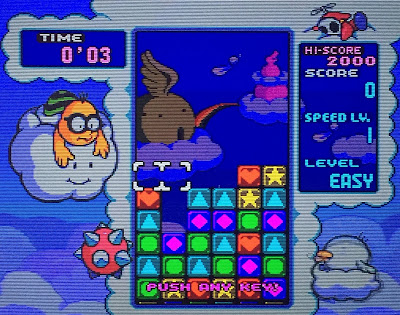 Tetris Attack (SNES)
In what might be called a blatant name drop, Tetris Attack is not related to Tetris at all. The game was originally released as Panel de Pon in Japan, and was renamed upon its western release, along with the additon of Yoshi themed characters. The game consists of rising blocks from the bottom of the screen. The blocks are of five varieties: yellow star, red hearts, purple diamonds, green circles, and blue triangles. You maneuver a two-block cursor, which can switch the order of any two blocks framed by it. Doing so may result in a chain of three or more of the same block touching, and thus disappearing and reducing the bulk below a set line, which is the goal for each stage. Again, two player mode is where the real fun is at. The music is super, super, catchy. 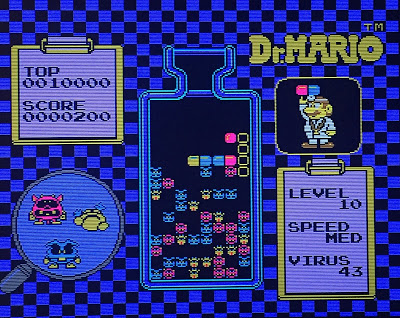 Dr. Mario (NES)
In the early days of the NES, Mario was wedged into many first-party Nintendo games as possible. Golf, Punch-Out!!, and now Dr. Mario. It's more ludicrous than people give it credit for, and bit scary to pass off pill prescriptions in such quantities. The concept is this: there are viruses that must be killed by color-matching pills. There are three colors of viruses (red, yellow, and blue), and correspondingly, three pill colors. The pills can be one solid color or half and half. The pills can be rotated so the correct side falls on the intended virus. Four segments of the same color, virus and/or pill, cause that chain to disappear and thus progress. The goal is to rid the jar of all viruses. Its bare-bones as far as complexity, but sooooo rewarding to whittle down a screenful of viruses to a clean bottom finish. The music is catchy as anything you will hear on the NES, even if there are only two tracks. Two player mode lays on the competition, and you can imaging the change in mood that can take place when things get heated.