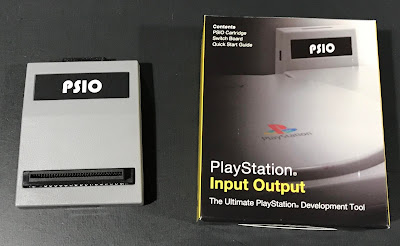 Continuing the recent trend of optical drive emulators, or ODEs, Cybdyn Systems (aside: I keep reading that as Cyberdyne Systems from the Terminator movies) has produced the Playstation Input Output (PSIO). This is an SD card reading device that plugs into the parallel port in the rear of an original Playstation. The primary purpose is to be able to play backups of your games, should the optical drive fail or the original CD roms become unplayable.

It is important to note that not all Playstations are compatible with the PSIO. Only the earlier models that have the parallel port can connect to the PSIO. Later revisions of the console dropped that port, so if yours does not have this port you are out of luck. However, there were sooooo many Playstation consoles produced, that finding one for cheap should not be an issue. 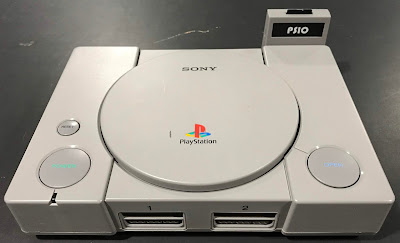 Due to how the PSIO operates, a small pcb switch board needs to be purchased and soldered onto the motherboard. This step right here immediately raises the necessary technical knowledge of the user.
Alternatively, you can send in your console to have it soldered for you when purchasing the PSIO unit, which is what I did. This was a smart move by the sellers, as it diminishes the need for soldering skills, and widens the potential customer base.

One of the major differences between the PSIO and the Rhea, Phoebe, GDEMU, and Super SD System 3 is that the PSIO does not replace the optical drive. Since is connects through the parallel port in the rear, the optical drive is untouched, allowing for continued use. The Rhea and Phoebe for the Sega Saturn, and the GDEMU for the Dreamcast all require replacement of the optical drive, precluding the ability to switch back and forth from backup roms and original games with any kind of ease.

The PSIO accepts a standard sized SD card, both in FAT32 and EXfat formats. Larger capacity cards are compatible, but I found that FAT32 works better. The PSIO manual is quite the tome, and if you gloss over it you may miss some technical details that will make or break your experience. There are several caveats to playing your backups, format wise. The PSIO accepts bin/cue, iso, and img formats. If you use bin/cue formats, the bin file must be consolidated to a single bin file. The PSIO account that you create on Cybdyn's website (with serial number verification) allows you to download a program that will do this for you. However, I found this to be hit or miss. Compatibility is much better if you rip your games into a single bin file from the start using a program like imgburn. Also, not all cue files are compatible as well, depending on the audio configuration of the game. If the game contains redbook audio, the .cue file will definitely have to be converted to .cu2. The aforementioned program will convert your cue file into a CU2 file.

Another quirk I've found, is occasionally the PSIO will not remember the settings that were entered and I'd have to go through the initial setup again. This is especially a problem when resetting after the PSIO freezes when the rom format is incompatible.

Once up and running, with roms in the exact format that the PSIO likes, the gameplay is just as it should be. This is no surprise, as the original console is running the software, regardless of delivery method. I really like the flexibility to play backup roms or physical discs. With my Saturn Rhea ODEMU, I keep another Saturn console around when I want to play actual discs. Game compatibility is stated to be above 99%, and I haven't found a particular game that does not run.

The startup time is not necessarily faster than playing an original disc. The PSIO has to load up when powered on, which isn't exactly brisk. The Rhea on the Saturn loads way faster, but that may be attributed to the difference in how the devices operate. It's not a deal breaker, but it should be noted.


These can be purchased from the manufacturer's website. Cybdyn is an Australian company, so if you want to have the soldering of the pcb switch done for you, you're paying a premium for shipping.  More conveniently, Stone Age Gamer, a retail company based here in the states will offer the same package consisting of the PSIO unit, switch, and soldering. Shipping is cheaper, and turnaround is faster.

From a strictly cost perspective, the PSIO is well under the comparable rates that other ODEMUs are going for. Granted, the Rhea and Phoebe units are produced in smaller quantities and sell out immediately after being posted, which drives prices sky high on the secondary market. I get the feeling that there are many more PSIO units being made than those.


Overall, I highly recommend the PSIO if you are comfortable with the process of backing up your games and changing file and SD card formats. If not, there is a requisite learning curve. If you decide on picking this up, I urge you to read through the lengthy manual, as you will save yourself a lot of headaches.