Review: Soukyugurentai for the Sega Saturn 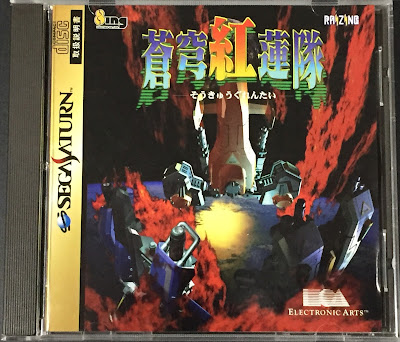 One of the hardest to pronounce shoot'em ups for the Sega Saturn is one of my favorites, as I mentioned in my Top 10 Saturn Shooters post.

This game has so much going for it, and yet I think that it may be slightly under the radar, as It may be a tad intimidating due to all the Japanese menu text, and that fact that the title on the game is in Japanese as well. I had to consult a FAQ online to see what menu options there were, but once past that, the game can begin; there's no need for translation past that point.

One weird thing that I'll get out of the way first is that it was published only in Japan, and by Electronic Arts (EA)! At that time, they were known mostly for sports games like the Madden series, FIFA soccer, NBA Live, and so on, so when I saw this pop up on screen I was befuddled. Despite EA being the publisher,  the game developer was 8-ing or Raizing, or whichever one they were at the time. Popular titles they developed include Battle Garegga, Kingdom Grandprix, and others. I think that the company was formed after the demise of Compile, so there's some strong shoot'em up legacy there. 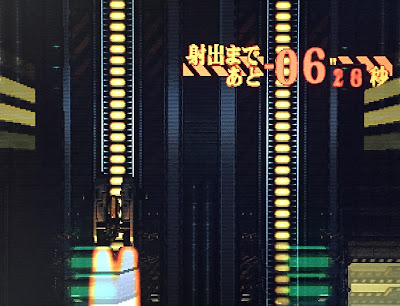 The game is a vertically scrolling shooter, with co-op. The main feature is the web-targeting secondary weapon, similar to the one in Galactic Attack/Layer Section, but more satisfying in my opinion. If you hold down the targeting button, a large web projects out and any enemies within will be locked onto. Release the button and missiles/lasers will seek them out. There are three selectable ships, with different attributes and web patterns. I prefer the dome-shaped web, the one Dave and Joe from Game Sack affectionately refer to as a condom in one of their Let's Play episodes. Almost all enemies below you can be targeted, and this method seems to deal more damage than shooting them in the traditional manner. Using the web is so much fun, sometimes I forget to fire my primary weapon until I get to a boss.


The visuals are gorgeous throughout the game. Much of the game seems to take place at night, and there are lighting effects on the streets and buildings that seem beyond a 32 bit console. The ships are brightly colored, almost cell-shaded before cell-shading was common. There is a lot of scaling as enemies change depth and swoop down from above or rise up from below.

The difficulty is adjustable, you just have to select the third menu from the start, and slide from 1 (easy) - 8 (hard). I usually start around level 3, as I like a balance of enjoyment and difficulty. Playing co-op is a blast, and it can get chaotic with all the web-targeting and firing from two ships at the same time.


A neat feature is the boss warning HUD that appears right before a battle. I think it displays technical specs about the boss, such as weapon load out, name, favorite snacks, I don't know. An interesting fact: if you are using an Action Replay cart to play the Japanese imports, this screen gets all garbled and non-sensical. The rest of the game plays fine, though. I am using a Japanese Saturn, so there is no problem here. The game was reprinted with a slight change in title: Soukyugurentai Okuyo, which fixes the glitch.

There's a story in here somewhere, something about corporate battles and resources and bank accounts. I can't read it so maybe I made that up. It doesn't matter though, as the gameplay rocks. The music is another strong point for the game. Composed by Hitoshi Sakamoto, of Radiant Silvergun fame, it is a blend of classic orchestral and techno motifs. Definitely worth a listen on its own.

This game is not as ridiculously pricey as some of the other Saturn shooters, and can be found for around $40-50 at the time of this post. I completely recommend it, its a must have for fans of the genre.