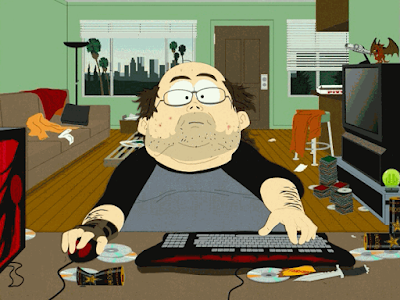 I've debated about writing this topic for a while now. Its a personal subject, and one that some of you may be able to relate to. I don't know if I have the answer, I'm just looking for a little progress.

As an adult male, it seems the socially acceptable norms for recreation would be activities that are masculine, expensive, or both. Golf, gambling, cross-fit, hunting, drinking, and sports all expected forms of recreation for an American adult male. American culture has this set of machismo expectations for men, and gaming does not fit the profile. Video games are perceived to be something that kids and teenagers play in their parents' basement. Perhaps it has to do with mass media's portrayal of gamers, helping set an image of how a typical gamer looks and behaves. It would not be the first time that popular culture's concept of a stereotype bows to the lowest common denominator. Just look at The Comic Book Guy from The Simpsons, or South Park's portrayal of a gamer. There's instant ridicule there, the easy targets, the low-hanging fruit.

Because we did it as children, as adults we should no longer continue to do so, like playing with matchbox cars or dolls. However, we have been watching television, movies, and videos out whole lives, and yet these activities are not frowned upon as adults. When it comes up that it is a hobby of mine, I get looks of surprise and disappointment, as if I were terminally ill. The implication is that it is something that I should have "grown out of". In this modern age when casual gaming on mobile phones and tablets is widespread, why does console gaming carry a stigma? If someone's hobby is watching movies or television, no one bats an eye, but if one plays video games as a hobby, it is perceived as juvenile.

Video gaming is just as commercially influential as the movie industry. In 2014, the gaming industry accounted for nearly $84 billion dollars in revenue, compared to $36 billion dollars from the movie industry. For something so prevalent, gaming is still shunned. Aside from the commercial aspect, I would argue that gaming involves more thought and problem solving that simply watching a video. A good game will have the player observe, attempt tasks, figure out patterns, and apply previous knowledge. A person is engaged throughout, responding to stimuli, making decisions, and adapting to new scenarios or rules. This cognitive aspect of gaming is swiftly dismissed, as non-gamers make assumptions of what it means to play a video game.

Being a retro gamer, I have an ample collection of games displayed in my basement. It is always a source of wonder whenever someone new comes over and gasps at these relics. Sometimes I feel judged, as if I were a hoarder who can't let go of anything. I generally express my pride in my hobby, and try to assure the guest that I do not have psychological issues, but I still feel the awkwardness. I shouldn't feel this way, but societal pressure to be and act a certain way causes this. While I generally think of myself as indifferent to people's opinions of me, especially those of people I don't know, I would be lying if I said I was impervious to it. Everyone's experiences may differ, and the people you surround yourself with may be more or less supportive. Just like anything else, people who don't know anything about a subject seek generalizations to understand. Couple that with the notion its something for kids, and you have an uphill battle when trying to explain your hobby to someone, as if you have to justify it.  If I'm honest, its not unlike being a closet gamer. Its my hobby, It makes me happy, its not hurting anyone, why should I care what other people think?

As a kid, I remember seeing "Trekkies" on TV and wondering what would make people behave that way; to travel to conventions, dress up, and obsess over a TV show. As an adult with a hobby that is unconventional, I can now better understand their zeal and passion. As I get older I realize I like what what I like, and I start to care less about what people think. That's when I started writing this blog. My purpose was to write down my knowledge and experiences with retro gaming, and perhaps help inform others who would be interested in learning more about this topic. If one person reads a blogpost and finds the content helpful or interesting, I take it as a success.

For years I have felt like I was alone in this hobby, and with the advent of Facebook groups I can finally have discussions with people who share this same interest. These are discussions that would rarely happen organically in my daily life, as there are so few people around me that share the interest. I have joined a number of groups, and find solace in the company of so many others that are like-minded.

I suppose the point of me writing this is to encourage gamers to embrace what they love, and not let social pressures inhibit them. We tell our children not to blindly do what peer pressure suggests, so we need to live by that philosophy. What about you? Do you feel judged because others around you think that gaming is just for kids?