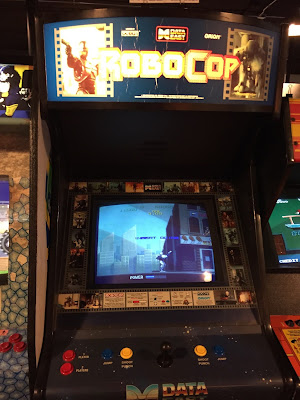 In the 80's and 90's, the arcades were a magical place where video games were unlike anything that you could play at home. Arcade games seemed larger than life. The bright visuals, the frenetic on-screen action, the energy and excitement of people beating a stage (of facing off head to head) were all part of a scene that is now all but extinct.

At the time, the graphics on an arcade machine were bigger and better, and sounds effects and music were superior. After a visit to an arcade, there was always a sense of a letdown when returning home to 8 and 16 bit consoles that just couldn't measure up. You wished and wished for home ports to live up to their arcade brethren, but it just couldn't happen. The struggle was real.

I had spent a lot of time in arcades growing up. In junior high school we would get dropped off at one, with five bucks and spend an entire evening there. There were several to choose from. Even in high school, arcades would eventually become part of the weekend. This gave me a wide breadth of games to sample, and I became pretty familiar with many if not most of the arcades released in the late 80's and early 90's. These are some of my favorites that became shells of their former selves once ported to home consoles.

I loved Alien Syndrome in the arcade. The overhead running and gunning with a sci fi aesthetic appealed to me as the Aliens movie had just been released. There were some not-so-subtle nods to the alien design, but graphics were not exactly high definition back then so I guess there was room for interpretation. You (and a player two) are tasked with rescuing crew members on alien infested ships. Aliens vary from blobs to worms to humanoid aliens. To increase the pressure, there is a timebomb that counts down for some reason.

The game was ported to Sega Master System, and the game was well, 8-bit. On paper, the game describes the same way, and the same gameplay elements are in place, but there is a lot lost in translation. Character sprite designs are simplified, movement animations are missing, weapons are less impressive, aliens are stiffer, and the sound is less ominous. At least two-player co-op was preserved, which was not necessarily a given.


Shinobi was an instant classic when released. The side-scrolling run'n gun style game featured a ninja with unlimited shuriken (throwing stars) and ninja magic. The action was tight, and the character design top-notch. All sprite animations looked realistic, from your walking, jumping, and throwing, to the enemy idle animations. The ninja magic was useful in a pinch to clear the screen of enemies and projectiles, and also did respectable damage to bosses. The game had a pace about it that was hard to imitate. You never felt like the game was impossible, or moving too fast, but it definitely moved at a quick clip.

When it was released for the Master System, I had to have it. I spent a good chunk of my birthday money to buy it from Toys 'R Us. Again, the basics were present in this home port. The same characters were present, the same stage design and bosses, and even the music was the same. It was all the same, yet it was not the same. The game played sluggishly. It seemed that you could only throw one shuriken on screen at a time (compared to the arcade's near rapid-fire star throwing). The jumping from lower to upper level seemed like it taxed the console, as all else stopped just for the transition to take place. The home port did feature a life bar, which made it a little easier, but you were not automatically able to use ninja magic unless a certain number of basic enemies were defeated. This also meant that you could not use ninja magic during boss battles!

Double Dragon was the first arcade game that I really remember co-op play vastly improving the experience (this is true with nearly all beat' em up games, its just more fun to play with a friend). Almost everyone has played some version of Double Dragon. The first time I played it was at my local comic book store, which had one arcade in the center of the room, and it rotated out every six months or so. The game had some wonky hit detection, the sound effects were delayed, and thee was massive slowdown with too many enemies onscreen, but I loved the game regardless. It was brutally difficult, especially when more than one Abobo appears, but once you learn the elbow smash, the game becomes manageable. In what may be a first for beat'em up games, you can attack your partner. This seemed wild at the time, but it makes sense once you get to the end.

When the game was ported home to the NES, I went with my neighbor and his mom to Toys 'R Us to pick up a copy on release day. Once there, seeing the stacks of them in the cage, I begged my neighbor's mom to buy me a copy and I told her I would pay her back as soon as I could (I did pay her back, it took a month of lawn mowing). We popped that game into the NES, and tried to figure out how to get two players. Once we realized that it was not happening we were distraught, betrayed. How could a game titled "Double Dragon" not have two player co-op? Once we got over it, we started playing by switching off. We played it over and over. The sprites were simplified, almost squished. The characters resembled those from the arcade, but in a more cartoonish way, almost deformed but not super-deformed. The game mechanics were altered as well to adjust to two buttons instead of three. Not all moves were accessible from the start, you had to level up to gain access to those. Disappointingly, the elbow smash was nowhere near as effective as it was in the original arcade, nor was it as cool looking. I understood all of the concessions that were made to the game to get it to run on an 8-bit system, but the grave sin was removal of 2-player.

The 1987 film Robocop was a scrappy sci fi film that did better than anyone thought it would. It was a hard-R rated film, as it was definitely the most violent film I had ever seen. I was about ten when I convinced my dad to take me to see it, and I remember him wincing in the theater during the scene where Murphy is killed. Times were different back then, and movie ratings meant nothing as most parents would take you see nearly everything. Anyway, the Data East arcade game based on the movie is a masterpiece. The graphics captured the look and essence of the movie and the characters as well as any 1988 arcade game could. Robocop's iconic gun was your primary weapon, with its rate of fire and aesthetics all on par. There were sound clips from the movie woven into the gameplay, enriching the immersion. ED-209 is featured as well. The bonus stages consisted of firing range challenges, complete with the same green cursor as seen through Robocop's visor.

The game was ported to the NES, and well, it's just about one of the crappiest conversions I've ever seen. Robocop is seafoam green in color, and walks like he's a flat board. His punch animation looks like an underhand volleyball serve, and when he does fire his gun it is just a pea shooter. For some reason every other enemy is a dog. The music is just the title theme repeated on a short loop. It is too painful to play, and so I just pretended it didn't exist. It was such a waste of a license.

This is just the tip of the iceberg, as home ports of arcade games was as commonplace as movies coming home to VHS. What are some of your favorite arcade games that got butchered for home release?