Review: XenoCrisis for the Sega Genesis 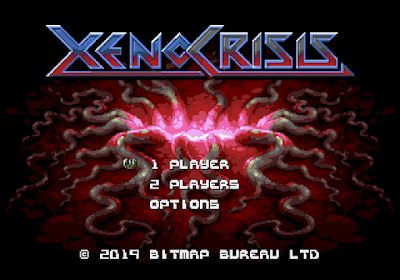 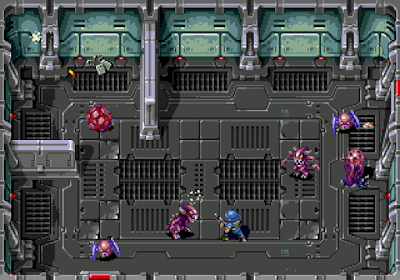 XenoCrisis is a new game released for the Sega Genesis/Mega Drive, as well as a few other consoles like the Dreamcast, Neo Geo (later), Switch, and Steam. It is a love letter to single screen run'n gun games like Smash TV and Robotron 2084, and is very heavily inspired by the 1986 Aliens movie. These are all good things. It is developed by British independent developer Bitmap Bureau, and was funded through a Kickstarter campaign. As soon as I saw the trailer for the campaign I backed it immediately. There were several options/tiers to back it, and I went for the physical cartridge for the Genesis.

To save us all time and cut to the chase, this game is awesome. It is everything that I hoped it would be and more. Let's start with graphics. The visuals they managed to squeeze out of the Genesis are amazing. Character sprites are detailed despite being smaller. They are expertly designed, well animated, and make the most of the available color palate. When watching the trailer, you forget that this game was made for the Genesis first, and ported to all others after.

While the game takes many visual themes and character inspirations from the Aliens movie, there are of course many original designs as well, all of which work seamlessly together. The enemies are varied, the bosses are unique and interesting, and the stage design fits the concept of the game, that is to shoot everything in a single room. The rooms are randomly generated for each stage, making each play through different from the last. Have you ever heard of a 16-bit game that has randomly generated stages? This definitely increases the replay value.

The gameplay is fast and addictive. You must clear the rooms one at a time, and eventually battle a stage boss. You can play alone or with a player two cooperatively. You select which protagonist to play as, noting the advantages/disadvantages of each. The male marine can carry more ammo (yes you need to keep picking up more ammo) but is a tad slower. The female marine is more nimble but can't hold as much ammo. I prefer the male marine, as I tend to bump into things when moving too quickly.

There are two main control schemes, optimized for either a standard 3-button Genesis controller or a 6-button controller. The latter utilizes a button cross pattern for weapon firing up, left, down, and right, whereas the former strafes while holding the one fire button (normally I prefer a twin stick control scheme for a game like this, but that's obviously not possible on the Genesis). I'm split on which control layout I prefer, because I like the simplicity of one-button strafing, but changing direction of fire is not as fluid as the buttons for directional firing.

Your player can roll out of danger with a button press. I keep forgetting about this, but when used correctly, it can be fairly effective is helping to survive longer as you are invulnerable during the roll animation. Speaking about surviving, this game is a serious challenge. Even on easy mode, you really have to be on your toes as you have a certain amount of hits before you die, and three continues. If you continue, you respawn in the same place and time when you died. I had my ass handed to me the first couple of playthroughs, but things settle in once you pickup on enemy spawn patterns, movements, projectile arcs, and so on. Fortunately, medical kits can be picked up to restore hit points.

Your weapon is a standard pulse rifle, which has limited ammo. This is my major gripe with the game, and it is the primary source of stress for me when playing. Perhaps that is the point, to add to the challenge, but it is very against the norm for a game like this. Ammo will appear when your bullet count gets close to zero, but you have to constantly think about how to get to the ammo if its on the far side of the room. You do have a melee attack when you are out of ammo, but that is not too effective in a crowd.

Power ups appear randomly, which have unlimited ammo but are timed. These include rocket launchers, lasers, shotguns, homing shots, spread shot, flamethrower, and others. These vary from strong but short ranged to fast but weak. You also have grenades, which need to be thrown in a specific direction as opposed to a "screen-clearing" bomb. Some rooms have barrels which are explosive, and you can strategically lure enemies to that spot and blow up the barrel to help clear the room. 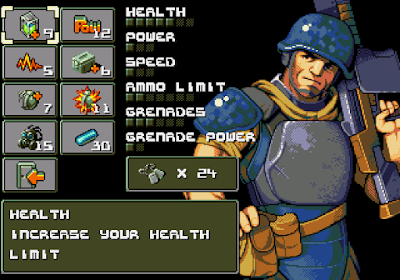 There will be dog tags dropped here and there which act as a currency for the in between stage shop. Here you can increase your life bars, shot power, buy continues, and other options. I find increasing weapon power to be the most helpful, as further on in the game, enemies require more hits to dispatch them. 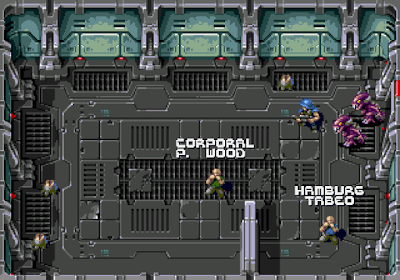 You will find prisoners to rescue, and they are all named after initial backers on Kickstarter who backed at a certain level. The names are random, and I think this is a fantastic way of giving back to supporters. I'm afraid that if my name pops up, I'll rescue the prisoner too quickly!


The game has six levels, and it will take some practice to see them all. It's a fun challenge, and one of the best Genesis games that I've played in a long time. I will probably pick up the Switch version as well, so that I can play it with twin sticks on the pro controller of 8bitdo SNES30 Pro controller. You can also buy a rom copy of it to play on emulation or on a flashcart with original hardware. To increase the fun factor, play with a friend. This is one of those games where the gameplay experience is multiplied when in co-op mode. James Cameron would be proud. Highly recommended!