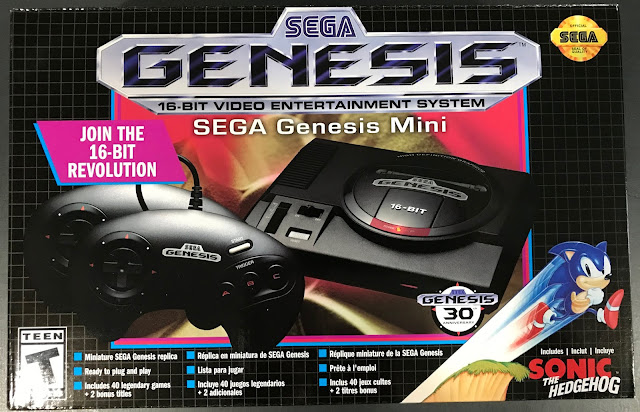 September 19th finally arrived and the Genesis Mini was released to much anticipation. In what is now a trend, the mini consoles of yesterday's technology are popular due to their strong nostalgia, and the fact that the kids who grew up with the original consoles are now gainfully employed with disposable incomes. Nintendo, Neo Geo, and Sony have entered the mini console market in recent years.
Prior to this release, Sega had licensed their back catalog to At Games, who have been making plug 'n play consoles for years. The difference is, those At Games systems were meant to be budget priced, end-cap fodder. The quality of the emulation and gameplay were less than good, and so they remained budget items. This recent release is Sega's effort in earnest, at producing a mini console that matches up to the standard set by the NES Classic Edition.


First impressions of the hardware itself are strong. The detailing of the console, its nooks and crannies, movable switches, and controller are spot on. The power switch and reset button are functional. The cartridge flap opens, but it is purely aestheitc; there's no circuitry, and same for the cd expansion slot underneath. Still, the fact that Sega actually went ahead and added these accouterments shows the love that went into making this. 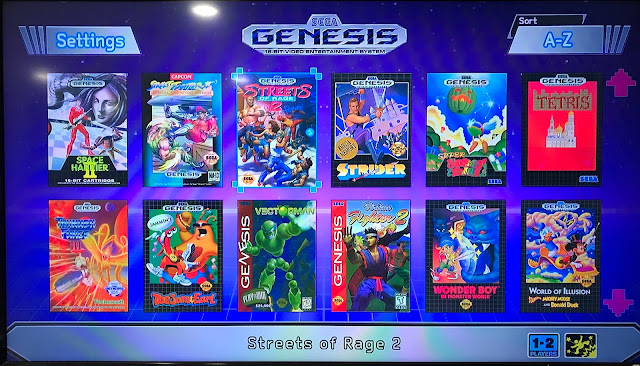 Upon powering on the unit, you are first asked to select a language, which can be toggled back and forth later as well. The menu screen pops up, and the 42 games available are selectable by a slightly twitch bracket icon. Games can be sorted by name, release date, genre, and number of players. The menu music is a seamless medley of melodies and motifs from the included games, arranged by the most famous of Sega Genesis composers, Yuzo Koshiro.

The gameplay emulation was programmed by industry-leader M2, and this is exactly what hardcore followers wanted to hear. Had Sega produced this console with At Games, the reception and anticipation would probably have been lukewarm at best. After putting the games through their paces, I think the emulation is fantastic. Nearly everything runs like original hardware, except for a few little issues. On some games, there is a sound effect delay. I did not notice this myself, it was pointed out in some YouTube videos. Also, a few games have slightly different video resolution that result in a shimmering effect as the screen scrolls.

The Genesis, like all retro systems, had certain tricks to pull off more impressive graphical feats back in the day. An example is the expansion of the color palate by altering the shades of brightness for each color. Another is the transparency trick, which is designed with CRT televisions in mind. Since this console outputs 720p HD resolution, the lack of certain tricks is apparent to those who remember them. Like the mini consoles before it, save states are available, which actually improves the experience of some older games that take way too long to complete in a single sitting (Kid Chameleon, for example). To save, just hold the start button for 5 seconds and select a slot.

Another perk is the ability to play the rom from a different region. When selecting the language from the settings screen, you are also selecting the region for the game rom. While this seems superficial, it actually can change the gameplay experience. For example, the Japanese rom for Contra Hard Corps is a lot easier than the domestic version, since the Japanese rom allows three hit points per life, instead of instant one-hit kills. 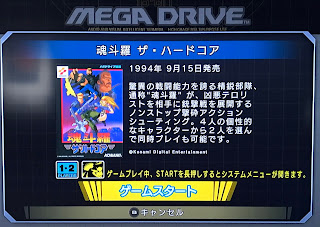 As far as Game selection, 42 games are included. Two of the games, Tetris and Darius, never saw release on any version of the Genesis. Tetris was Sega's arcade version, and Darius was ported from the ground up, based on Taito's arcade. Mega Man: The Wily Wars was available in North America only on the Sega Channel, which was a game download service in the 90's. Monster World IV was also unavailable in the west. The additions are great, and offer something new to longtime collectors.

The included retail games are generally good, with some standouts like Castlevania Bloodlines, Contra Hard Corps, Shinobi III, Streets of Rage 2, and Thunder Force III. There are expected games, which are found on nearly every Sega game compilation: Sonic The Hedgehog, Golden Axe, Vectorman, Columns, Altered Beast, etc. There are also missed opportunities. I was really hoping for MUSHA. Revenge of Shinobi, Thunder Force IV, Raiden Trad, and Gaiares. I understand that licensing fees can become prohibitive, but Sega owns the Thunder Force and Shinobi franchises. Instead we got clunkers like Alex Kidd, Eternal Champions, Virtua Fighter 2, Space Harrier II, and Sonic Spinball. In some way, including these marginal games dilutes the experience. Its true that you can't please everyone, but come on. At lease load up on your own best franchises and add the rest of the Streets of Rage, Phantasy Star, Golden Axe, and Thunder Force games. 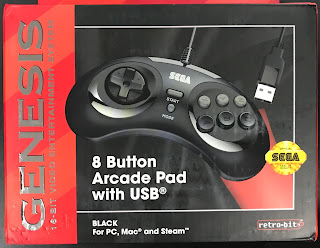 Game selection aside, bonus points are earned by being compatible with RetroBit's excellent 6 button pad (officially licensed by Sega). It makes Street Fighter 2 Champion Edition playable. I know that many people are disappointed that the domestic release of the Genesis Mini does not come with the 6 button pads, and the Asian releases do, but keep in mind that the Asian 6 button pads are smaller, and different than the ones we are used to. I find Retrobit's offering to be excellent.

Overall, the Genesis Mini is great. It is just as good if not a tad better than the SNES Classic, in my opinion. It's perfect for those who want a simple way to play the classic Genesis games of yesteryear. Hardcore fans will still like it for its attention to detail. Get one while you can.