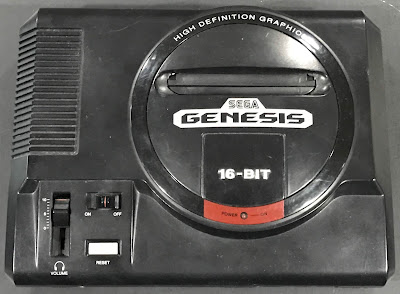 The Sega Genesis mini is due to come out in a few weeks, and I can't wait to see one of my favorite console replicated in miniature form. I love that it is coming with two controllers, so we can hit the couch co-op right away. In the spirit of the event, I thought I'd conjure up my top ten Genesis co-op games.

The only Contra offering on the Genesis is also one of the most hectic and difficult. The graphic design, the music, and the frame rate are all examples of the hardware's capabilities at its best, and it is a console exclusive. There are four different protagonists to choose from, each with unique weapons and abilities. New to the series are branching paths, building in more replay value, as if the character-building difficulty didn't already do that. Grab a player two, because the you'll need all the help you can get. This would have been rated higher, if not for its crushing difficulty. Incidentally, the Japanese import version of the game gives three hit points per life, greatly reducing the frustration and making the game tremendously easier.

An early Capcom arcade conversion, Forgotten Worlds is a shoot' em up of the flying humanoid variety. The two players operate similarly despite being different colors. You rotate your player to shoot in all directions, and flay all over with a jet pack. Defeated enemies drop currency which can be used to purchase power ups in the shops that sporadically appear, ala Fantasy Zone. Weapon upgrades are a must, as well as body armor and life-restoring elixirs (you have hit points instead of lives). The difficulty is high, but manageable once you remember the enemy patterns. Also, the voice acting is incredible*.

Captain America and the Avengers 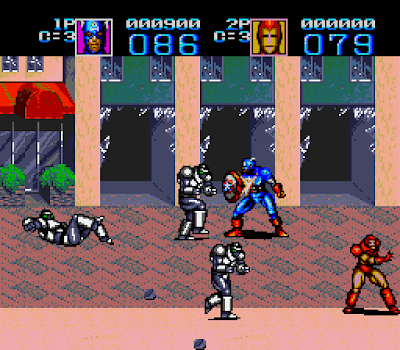 Pick between Captain America, The Vision, Iron Man, and Hawkeye and take on The Mandarin and his cronies in this wild quarter-munching beat'em up. Each player has their own dedicated moves, like Iron Man's repulsor beam, Cap's shield throw, Hawkeye's arrows, and Vision's laser beam. As cool as those sound, they are nominal in effectiveness, and you may just end up mashing away at the attack button. There is some stage variety in the flying shoot'em up stages, which is unusual for a beat'em up. It's a difficult, but manageable game, made easier with help from a friend. The voice sample clips are bad in a good way. The Genesis port is much more agreeable than the nearly impossible SNES port. 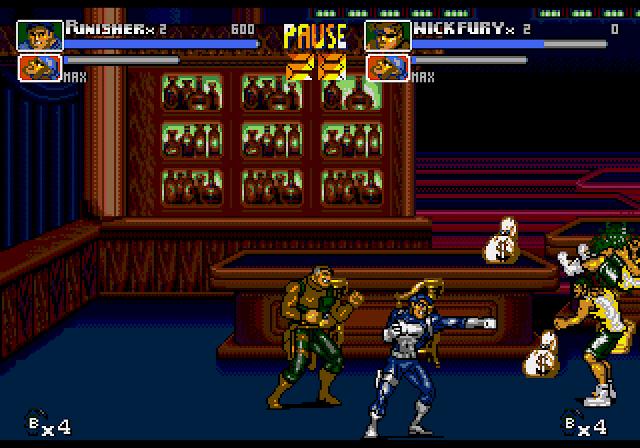 An edgy beat' em up, play as either the Punisher or Nick Fury and you punch and blast your way through an urban war zone. Anyone who has read the Punisher comics knows that he doles most of his punishment from the barrel of a gun. Even though the gameplay is mostly fisticuffs, there are plenty of opportunities to pick up guns and blast away. The arcade versions is better, as to be expected, but the Genesis rendition is no slouch. 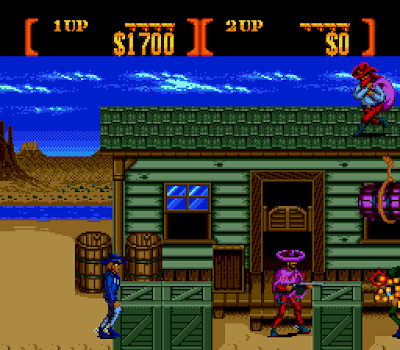 This western-themed run'n gun evokes the ethos of Contra, and as such, is just as fun. Ported from the arcade, it is often compared against its counterpart on the SNES. You have the choice of two players, which carry different weapons (single shooter vs. shotgun). The action is quick, and boss fights are challenging, but not so challenging as Hard Corps. The game boasts plenty of humor, a great soundtrack, and great control. It's definitely one of the most fun co-op games for the Genesis. 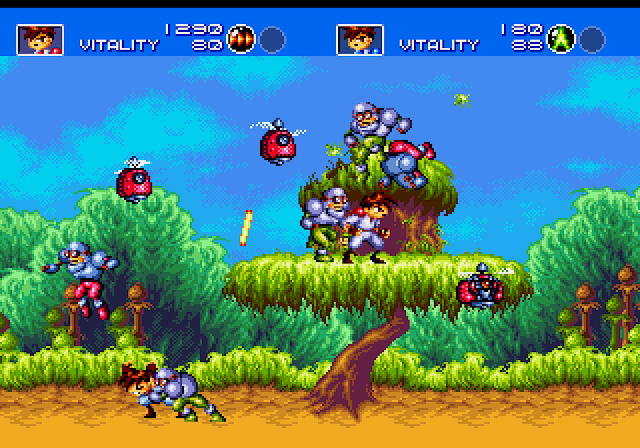 One of the most heralded games on the Genesis needs no introduction. Game developer Treasure's first outing is arguably their finest. The level of on-screen action is on par with Contra Hard Corps, as explosions, enemy sprites, and bullets litter the screen. The humor embedded in enemy behavior is palpable. You have a life meter, which is pretty forgiving, and thus easier for newcomers to pick up and play. You can throw your partner across the screen to wipe out enemies, without taking damage. The weapons can be combined for a myriad of options, and your firing stance can be set to fixed-in-place or free moving. Also, it's loaded with charm. It's simply one of the best games for the system, let alone for two-player. 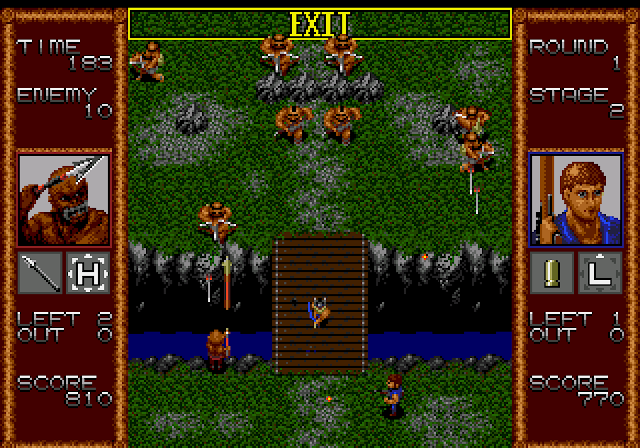 A surprise entry on this list, Gain Ground is very much under the radar when it comes to Sega classics. Originally an arcade game, it was ported very faithfully to the Genesis. Part a run'n gun game, part strategy, this game requires on the fly decision making as well as quick reflexes. The story is absurd, essentially you need to get from point A to point B on a single screen. The sheer variety in this game is immense, from the available protagonists, weapon types, enemies, stage designs, and bosses. Co-op play brings the fun factor to new levels as the two of you try to figure out how to accomplish the seemingly simple task of crossing the screen. 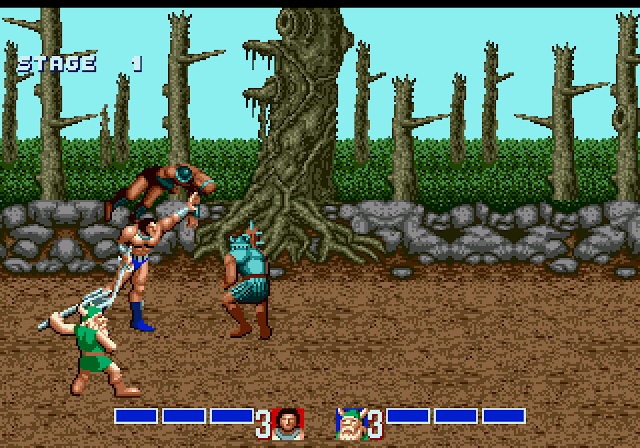 When Sega observed the success the Double Dragon was having in the arcades, they wanted their own brawler that people lined up to play. Changing the theme and setting so as to not appear as a direct copy, they produced Golden Axe, which I feel is the superior game. Character inspirations are clearly drawn from the Conan the Barbarian franchise. At the time there was no other game like it. Kleptomaniac dwarves, rideable beasts, magic spells, dash attacks, and a fantastic soundtrack are all part of the package. 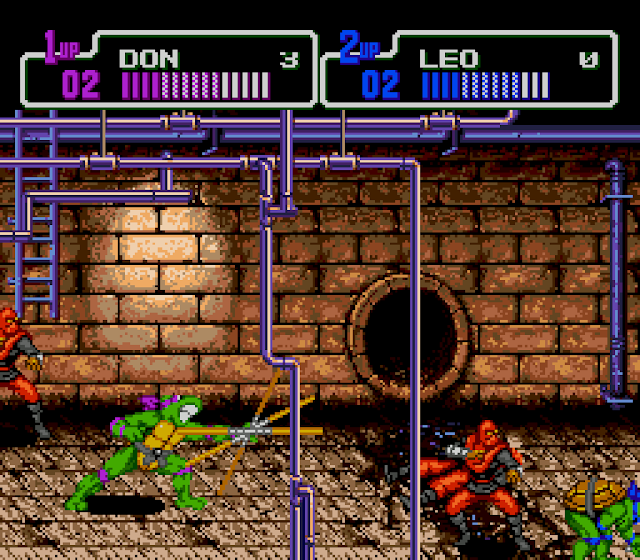 TMNT Hyperstone heist is often overlooked relative to its SNES rival, TMNT IV: Turtles in Time. It's true the games are very similar, but the Genesis outing has enough differences to make it less a port and more its own game. It sports some of the best hit detection and pacing on the system. The voice samples do suffer a bit, but that's the only issue I find with the game. Grab some pizza and get ready to kick some shell. 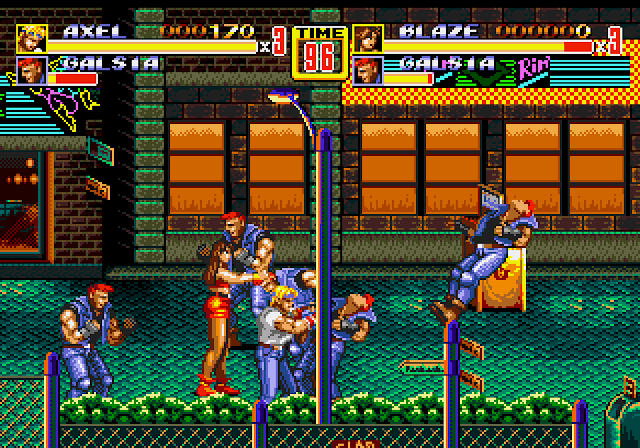 What Final Fight? The premier first-party series on the Genesis peaked with this second entry. SOR2 offers variety in four selectable characters, each with strengths and weaknesses. Attack combos are now present that increase the satisfaction in dispatching thugs. The gameplay is balanced and fair, and the time flies when playing with a partner. The soundtrack is perhaps one of if not the best on the Genesis. This is a shining example of what can be done with the Genesis sound chip if programmed by the right people. If you have never played this game, you don't know what the Genesis is capable of.

So all in, the best two-player co-op games seem to fall into the vein of beat'em ups and run'n gun games, in my opinion. There are a bevy of sports titles that I left out, as those are primarily versus games, with head to head gameplay. I was surprised when I realized that although the Genesis is known for its quality shoot'em ups, almost all of the good ones are single player only! I'm sure I left off a bunch that others would argue belong on this list, but hey, it's my list.

In conclusion, if you like playing couch co-op, check these out. You won't be disappointed.