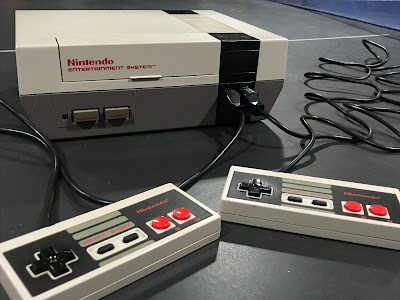 My previous post was on my top two player co-op games for the NES, so this time I'm dredging up past rivalries and covering my top two-player versus games. Playing these games as a kid may have involved pushing, shoving, pulling your opponent's controller cord out of its port as you battle to back up all the your trash talk. 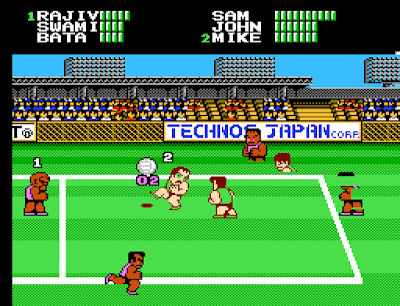 What kind of childhood would be complete without reliving the horrors of gym class dodge ball? In case you weren't traumatized enough during the school day, you can take out your aggressions in Super Dodge Ball for the NES. The game is sort of fun alone, but several times better against a live opponent (as are all of these games). There is variety to be found as each player has tweaked attributes, and differing power throws. There are some rules that I don't quite remember from gym class, but overall its a blast. 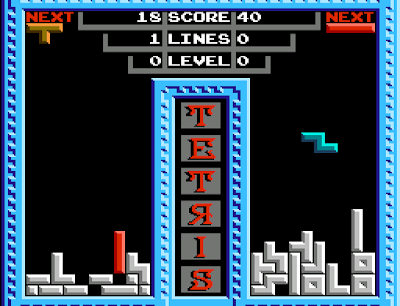 The first Tetris game I played was the Tengen Tetris game. At the time, I had no idea that it was unlicensed, nor what that really meant. I remember the odd-shaped, black cartridge, and thinking it was odd, but whatever. This version allowed for two-player head to head, and that automatically makes it superior to Nintendo's official offering. It was the first two-player VS game that I ever played, and in my mind set the bar for how such games should play. As you clear lines, your opponent has junk rows added from the bottom, inhibiting his ability to clear lines effectively. The music was catchy, the colors popped off the screen, and there were little Russian dancers that would come out inbetween rounds. 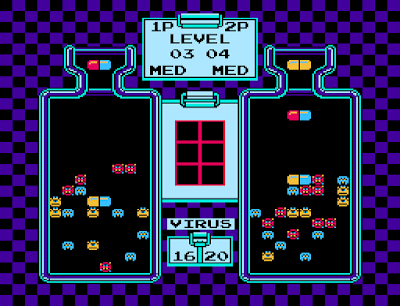 A highly color-dependent puzzle game, Dr. Mario has you maneuvering bicolor pills that drop into a jar such that four pill halves in contiguous color contact disappear. The goal is to clear the play field. Just as in Tetris, the better you perform, the more difficult you make it for your opponent. There are only two music tracks, each one just as catchy as any Mario soundtrack. You'll be humming the melody to "Chill" or "Fever" for hours after you're done playing. 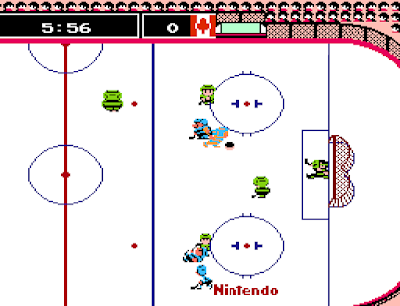 NES sports games did not require much actual sports knowledge, and I still don't know what icing is, but Nintendo's Ice Hockey built in its own layer of strategy by incorporating a simple concept everyone can understand. Fat guys are slow and strong, and skinny guys are fast and weak. By allowing you to choose the composition of your line, you choose your approach. Do you power through with a heavy set, knowing you'll lose every chase down of a loose puck, or do you finesse your way to the goal, knowing that if you get hit you're flattened and loose the puck? Debates still continue as to what is the optimum lineup. 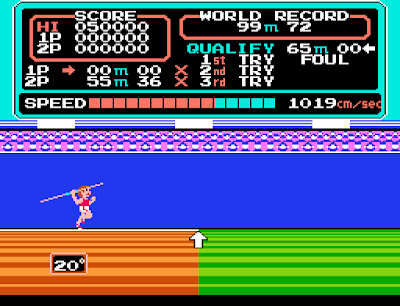 An early third-party release, Track and Field was a popular arcade conversion by Konami. What could be more adversarial than a pure button-masher? Want to see who will win a race? All you have to do press the buttons faster than your opponent. New and intriguing methods were devised to increase the rate of button taps. Two methods were using a shirt sleeve to rapidly slide your fingers back and forth over the buttons, using your index and middle fingers in a alternating tap. Other events required more than button mashing, like the timing of the javelin throw, jumping the hurdles, the clay pigeon shot, and others. This is a game that would fit well in a competition cart.


Pro Wrestling
Another early NES title, Pro Wrestling had just enough character, just enough simplicity, and and just enough realism to draw kids of the 80's in and pursue their own wrestling title dreams. I remember sleepovers where winner takes on all challengers, and keeping win-loss records on a notebook paper. Everyone had a favorite character, each with a signature move. Try the power moves too early and it will backfire on you. Will your opponent stay down on the mat long enough for you to leap off the top turnbuckle and crush him with a knee drop? Or will he roll out of the way, leaving you to crumple to the mat? Like the prematch posturing that took place before televised matches, this game brought out the most colorful insults.

This is an arena racer that shows the entire race course on screen. As such, your cars are pretty small. I don't know much about monster truck racing, but the courses seem ridiculously treacherous and unforgiving; perfect for a video game. The hardest part of this game is turning. Your controls are relative the to the direction the car is facing, and it can be easy to over turn and hit the wall just before a turn. With the aide of a Four Score adapter, you can race against three of your friends at the same time. It was a party game before party games existed. The difference between a skilled player and noob is painfully and hilariously evident. Adding insult to injury is the fact that the top finishers receive more money, and can upgrade their cars at a faster rate, further leaving unskilled drivers behind. A true gem that more people should play with friends.

There aren't a lot of basketball games on the NES, but even if there were, Double Dribble would have to be one of the best. It is hard to program a game with that many sprites moving around at the same time, yet Konami did a fine job replicating the fast pace of basketball. The graphics are serviceable, the sprites flicker as the cpu tries to keep up, and yet there is no slowdown to be found. The free throws involve timing, the three point shots are rare (unless you know "the spot"), and stealing passes is just as frustrating for your opponent as in real life. Despite not having the NBA license nor player likenesses, this game is worthy of settling disputes.

Despite this being the second hockey game on this list, Blades of Steel has one thing that none of these other games offer: in game fights. If you keep harassing and checking the same player, he'll eventually throw down the gloves and be ready to duke it out. Player control is tight, and shooting and passing are intuitive. There's even a mini-Gradius game that you can play during intermission. Voice samples are impressive considering the machine. "Get the pass!"

Out of all of the competitive games on the list, I have found Tecmo Super Bowl to be the ultimate dispute settling, disparaging, humiliating, gloating, scream-inducing, controller-smashing game. Football is the sport I watched the most of growing up, and in our neighborhood, it was king. With quick plays and four quarters, you can do a lot of damage in little time, and have your opponent buried by halftime. Or, the game could come down to the last play. Part of the strategy is knowing the nuances of the game, and which team to use. Deeper than that, knowing the "money" plays and general football strategy will go a long way to provide an advantage. We're not talking "Madden"-deep strategy here, but even still, the cpu will control the players the users are not, so anticipating what the cpu will do can help you sneak some plays in that wouldn't work in real life.
This game has a cult following, and a community that hosts regional tournaments and updates rosters. You can even purchase an updated physical cart.

So there you have it. If you and a friend have a dispute that needs to be settled, you have a burning urge to yell "in your face", pick up those NES controllers and settle the issue like adults. Just don't throw the controller, as it is are harder to find replacements these days.