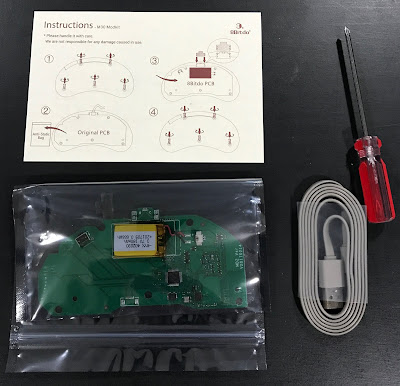 8Bitdo is a company that has made quite an impression in the retro gaming world, with its lineup of bluetooth controllers and receivers. They controllers are generally well regarded, with good build quality and minimal lag. These products have been reviewed all over the internet, so I won't dwell on those too much, I wanted to focus on their recently released modkits.

The modkits allow you to convert an original NES, SNES, and 6 button Genesis controllers to bluetooth controllers. This is the first time that 8Bitdo is offering options for Sega controllers, as their product line has been primarily Nintendo-centric to this point. I applaud the expanding of horizons, yet wonder why it didn't happen sooner.

Initially, I was conflicted about sacrificing an original 6 button Genesis controller, but my fears were allayed when I saw how clean the mod was. You simply unscrew the back, swap out the guts of the controller with the new board, and screw the backing on. You can store the original controller pcb in the provided anti-static bag should you want to revert your controller to stock.

The mod presents a micro USB port to charge the controller, and a cord is included. The instructions state that it is compatible with Switch, PC, Mac, and Android. All of their products now advertise the same compatibilities, and since their other controllers are compatible with RetroPie, I assumed (correctly) this would be as well. This is a game changer for playing Genesis via emulation; a legitimate controller makes a work of difference.

What is puzzling is that they do not offer a retro receiver for the Sega Genesis. They went so far as to design a bluetooth board for the Genesis controller, yet it cannot yet be used with an original Genesis. Perhaps this will come in time. It does work with the receivers for the NES, SNES, and NES/SNES Classic receiver, but the SN30 model is the best bet for those consoles.


At the time of this writing one other Bluetooth Genesis controller exists: Krikzz's "Joyzz" Genesis bluetooth controller. Krikzz is the creator of the Everdrive series of flash carts. It comes with a receiver, but at a $65 price tag, plus international shipping, I haven't gotten around to ordering one yet. RetroBit is gearing up to release its line of Sega bluetooth controllers, and has shown some prototypes at trade shows. It will be interesting to compare the field of offerings, and I'm excited Sega is finally getting some Bluetooth love.

Even though there is not yet an 8Bitdo receiver for the Sega Genesis, I recommend this modkit for anyone who wants a modern experience playing Genesis games via emulation, like RetroPie. At $20, its worth it.