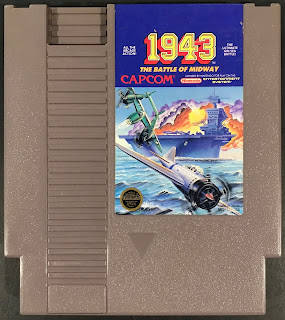 When I was a kid, there was a Comic book store in my home town that would feature a different arcade cabinet every six months or so. I distinctly remember it having Rygar, Time Soldiers, Ikari Warriors, and 1943. I would buy a comic for 75 cents, and then play a game with the change. I played 1943 a lot, and became pretty decent at it.

Later, 1943 was released for the NES. I didn't purchase it right away; new game purchases were rare  in my household. I think I got it from Funcoland as part of a trade-in deal. As crappy as I felt about trade-in values back then, I still continued to trade in games as that was the only way to a kid could get enough money to acquire games. I mainly bought used games, as they were more affordable.

We all knew that home console games weren't as pretty, or didn't sound as good as arcade games. Especially considering the NES could only have 24 colors onscreen at one time, there was bound to be some imaginative use of pinks and purples. Given that the game takes place entirely over water, the backdrop is lots and lots of ocean. There are little flecks of color here and there, and lots of clouds of different shapes, but overall the visual variety was doomed from the start. In true shoot'em up nature, there has to be lots of enemies on screen at the same time, so that means small enemy sprites, which are hard to make detailed due to their diminutive dimensions.

Even though the game took an expected hit in the graphics department, it was even more fun than the arcade. I remember the soreness in my thumbs after I played it for hours on end. I think the reason it was addicting was the RPG elements that it incorporated into its gameplay. Your plane could could "level up" any one of its five attributes if you found a secret icon (rose or dragonfly). The attributes you could improve were: offensive power, defensive power, energy limit, special weapon variety, and special weapon timer. It is so satisfying to see the longterm effects of progress, and helps to balance the increasing difficulty of the later levels.

Your P-38 plane is equipped with a double machine gun. If you hold the fire button, you charge a powerful laser blast, but charging takes two seconds, which in a fast paced game is a lifetime. I don't find it worth the risk to not fire, so I seldom use it. Your plane also has an escape loop the loop manuever, like in 1942, except this is accompanied with a lightning strike or tsunami, depending on your proximity to the surface. This will wipe out small enemies on screen, but it will also cause damage to you as well, which is a questionable programming decision. If your life meter runs to zero, you can use these attacks without loss of life, since you don't have anything to loose, that's really the only time I would use them.

Being an early NES title, there was no rapid fire feature, so using a turbo controller is a must. A couple of the weapons have automatic fire, but since all special weapons are timed, you can't count on these for long, so you have to keep an eye on the weapon timer. When it gets low, you need to shoot the next power up icon that you see until it becomes the desired weapon. Which special weapons are available is determined by how many points you have used to upgrade the special weapon attribute. For every attribute point, a new weapon is made available. Each special weapon pick up has its benefits and draw backs.


I mainly use the shotgun, powered up twice, as it allows me to not worry about direct enemy fire. In the later stages, there is so much going on that it is easy to get hit as fire comes from all directions. Also, this allows me to build up my other attributes like offensive and defensive power, energy and weapon timer limits. Thirdly, the fewer weapons you have unlocked, the easier it is to shoot the power icon to get the desired power up, since there are fewer weapons to cycle through.

You have only one life, and your energy limit determines the number of hits you can take before you explode. However, the timer counts down, and you will continuously need to replenish energy by collecting energy tanks, or power icons. The basic appearance of a standard shoot'em up has become eschewed by the resource management and leveling up tactics, making this a remarkably deeper than it appears. It also has difficulty in spades; you'll have to work to get far in this game. Fortunately there are unlimited continues, and even a password system, which is unheard of for a shoot'em up.

Overall, 1943 on the NES deserves more credit than its given. Even though it may appear monotonous in nature, its got enough tweaks and challenge to keep you coming back for more. The password system and unlimited continues gives you a fair shot at success, and being able to pick up where you left off was a novel idea for its time. I highly recommend this game for any fan of shoot'em ups, just make sure you use a controller equipped with turbo.