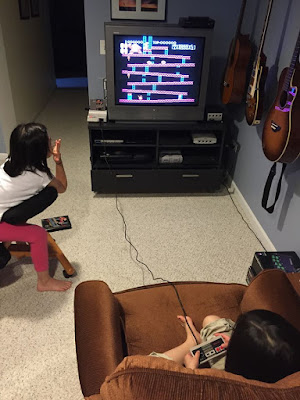 My kids are getting to the age where they enjoy video games. While the primary console that they game on is the Wii or WiiU, I do school them in the ways of retro gaming. It wasn't something that I forced on them, I let them discover it organically. The game room didn't mean a whole lot to them when they were really young, but as they became more perceptive, they would ask about the games on the shelves. The colorful boxes and cartoonish covers drew them in. Mario, Sonic, Mega Man, Duck Tales, and others still have the same visual appeal as they did thirty years ago.

The Wii was the first console that they became familiar with, and Wii Sports bowling was their first game. When I first showed them the 8 and 16 bit systems, their concept of controlling was to motion the controller up, down, left, right, and every which way. This took a while to diffuse, but every now and then there's some body sways during a long jump in Super Mario Bros., or Sonic.

Once I started showing them retro games, I was reminded of how hard old NES games are for kids today. Back when we were kids it seemed like we had fewer distractions and more time to put into fewer endeavors. As such we continued over and over again until we mastered the nuances of Mario's run and jump physics, Sonic's wonky acceleration from stand still, and Simon Belmont's committed jump arc. We learned patience because we only had a few games. This leads me to be pretty selective about the games I introduce to my kids, as they don't have the same controller skills that we did. I showed them games that didn't require twitch reflexes (Contra, Mega Man) or complicated move sets (Street Fighter 2 and the like). Platformers, beat'em ups, puzzle games, and light gun games seem to fit the bill.

Sometimes we'll play in the basement on original consoles my main setup if we have a decent amount of time. Other times if we have ten or fifteen minutes to burn we'll play on a Raspberry Pi in the living room. My daughter doesn't have a preference, and for the game she's playing it doesn't really matter. As long as she's having fun, that's what matters.

So far, my youngest daughter is the most interested in retro gaming. Her current favorites include 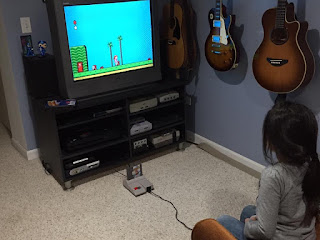 Super Mario Bros. series
This is a staple. These are less forgiving than the Wii or WiiU versions, but colorful and appealing all the same. The musics is infectious, embedded in your subconscious after a few plays. While there is some tight controls necessary for mastery, anyone can pick up and play, and that was the idea. Accelerating before a long jump is still hard for them to pull off, but that comes with practice.

Galaga
There's a primal simplicity in shooting and dodging across one plane of movement. It is a perfect beginner's shoot'em up, as the rules are obvious after playing for ten seconds. Progress is simply a matter of how far you can make it.

Dr. Mario
Puzzle games are great for problem solving, and possibly more addictive than the typical game. I consider this to be the best original puzzle game on the NES, and I showed my kids why.

Duck Hunt
The zapper is the easiest controller for kids to use. Difficulty can be increased simply by standing farther back from the TV. Every kid should experience the laughing dog. 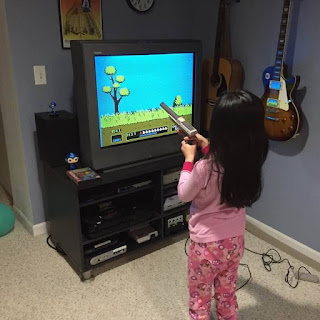 Castle of Illusion
Although Micky Mouse may not have the monopoly on childhood affections that it once did, this is a very nice looking game that holds up today. The pace is very appropriate for kids, and the animations are still entertaining.

Sonic The Hedgehog
Sonic is colorful and fast. The freed animal friends are cute and plentiful. The controls are simple. Aside from the occasional lesson in momentum here and there, the game is literally a blast (except for the out-of-character Marble zone). 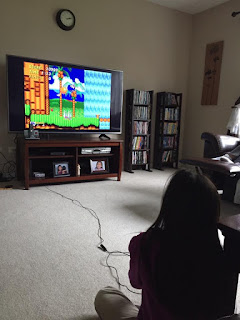 TMNT The Hyperstone Heist
Teenage Mutant Ninja Turtle games from the '90s are as kid friendly as they come. The ninja action is frantic as you can button mash your way through the game. As with all beat'em ups, cooperative play is king. 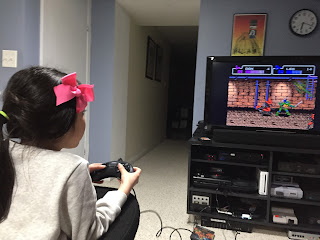 Golden Axe
A little bit more serious than Hyperstone Heist, Golden Axe is just as easy for a kid to learn. The magic action is cool to use, and the medieval setting is a change of pace from the overtly juvenile games listed so far. 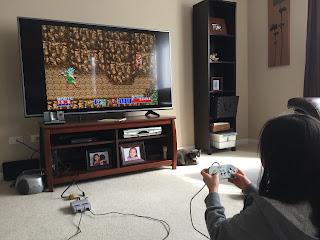 Streets of Rage 2
I wasn't sure how my daughter would take to this one, but once she saw Blaze on the character select screen there was no turning back. Maybe I should have felt bad about introducing her to a game where you beat people up on the streets, but it didn't seem to sink in. It's a bit dicier as you can injure each other, but its training for Double Dragon I suppose. 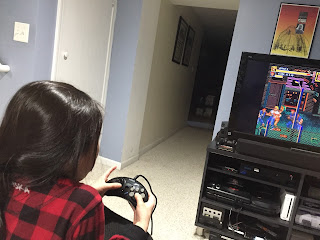 Donkey Kong Coutry
Rare's 16-bit system life extender is a marvel of programming, and is still an impressive feat. Being able to play as Diddy or Kong enhances the experience. Rideable helper animals add to the fun, and figuring out how to platform to the extra lives and bonus letters complete the experience. This one can get difficult with some precision timing for jumps.

Bomberman '93
The Bomberman games are some of the original party games, encouraging friend-on-friend mayhem well before Smash Bros. My girls aren't too keen on playing battle mode, but they do enjoy the single player campaign. The music can get a little irritating, as the loop is a little short. 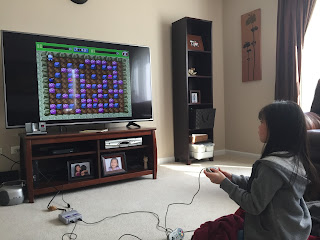 Bust-A-Move '99
Another puzzle game that is easy to learn and hard to master, Bust a Move draws kids in with their Bubble Bobble avatars. Its a subtle lesson in geometry, without the protractors or crying. My daughter's favorite stage is any one where you have the pointer dots (surprise). The music is as catchy as anything you have ever heard. 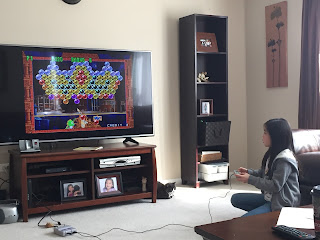 Crash Bandicoot
Sony's first system mascot would have been a success on any generation's consoles. The character design is colorful and fun, and game mechanics are universal in that early 3D way. The simplicity of gameplay makes this kid accessible immediately.

With the benefit of hindsight, all of the games that my girls play are vetted by me, directly (I'll recommend) or indirectly (they find one on the shelf). The coolest part of all of this is that we have another thing that we enjoy doing together.
So what are some games that you think they should tackle next?