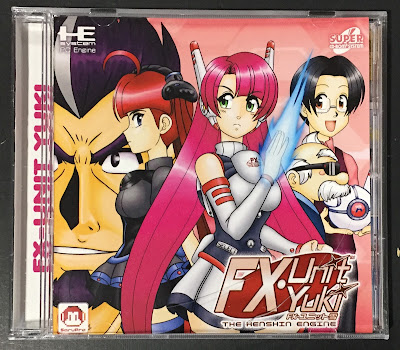 Modern retro-inspired games are becoming more prevalent these days, with titles like Shovel Night, Sonic Mania, and Retro City Rampage leading the way. Most are independent developers, with crowdfunding or Kicker campains funding the projects.
FX-Unit Yuki, formerly known through its Kickstarter campain as the Henshin Engine, was recently released, and I had the opportunity to buy one from Sarumaru himself at the Midwest Gaming Classic in Milwaukee. I had played the demo last year in the Turbofest room, so I was excited to see the final release.

The game is a 2D action platformer for the PC-Engine Super CD system, or Turbo CD, since the system is not region locked for CD games. Dreamcast and Genesis ports are also in development. 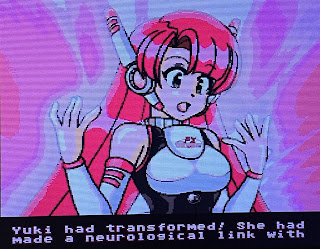 The story is presented in several cut scenes in-between stages. The protagonist, Yuki, is a game tester that gets digitized in a virtual game world. The story and quest begins there. A rival character is eventually introduced, which brings some additional interest to the storyline.

The gameplay is what you expect from 2D platformer from the era that it is inspired by. Yuki has a slash attach reminiscent of Hiryu's from Strider.  Controls are tight, although hit detection could be better. Her jump is fairly responsive, and controllable mid-air. New abilities are learned throughout, such as a charge shot, slide, double jump, and so on. 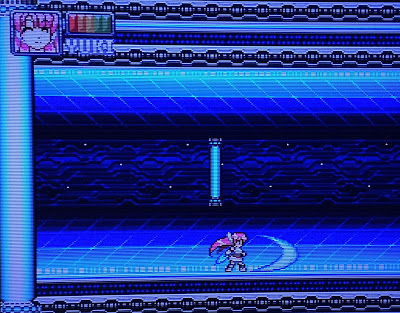 The art style is a clean and bright anime style, with impressive overall quality. I am not a huge fan of anime, but this is as impressive as I've seen. There is high correlation between sprite design and the drawn anime, so there is no question as to which sprite is which character. The amount of detail in the sprites and backgrounds is impressive, capably standing amongst the best of the era. 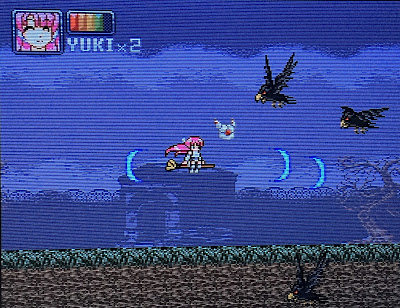 The Stage design rather simple, with a few tricky platforms here and there. The platforming evolves as skills are acquired, and the learning curve is fairly steady. For veterans of Mega Man and the Mario games, the platforming is not the central challenge. Common enemies throughout each level present challenges due to difficult angle of attacks (think ravens in Ninja Gaiden, or Medusa heads in Castlevania). I died many times arrogantly assuming I had them figured out.

The stages are themed after familiar retro game stages. Stage 1 appears to be an homage to the Wonder Boy/Adventure Island games. Stage 2 recalls the Cotton series, flying broomstick and all. Stage 3 is based on the 8-bit Castlevania games, and so on. 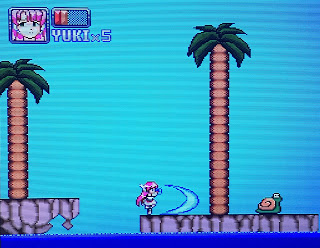 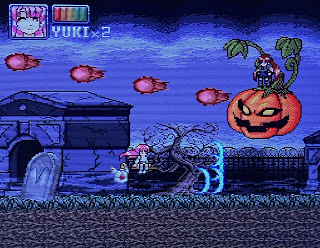 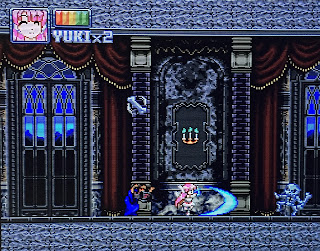 The bosses are decently large, and present a healthy yet manageable challenge. I got frustrated with the 3rd stage boss, and had to take a hiatus from the game. That thing can go to hell. 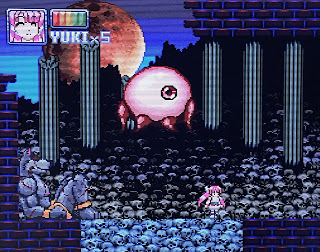 The music in this game is outstanding, seriously. It is very rhythmic and catchy, and the retro-inspired motifs match the stage action and theme. It incorporates a blend of guitars, keyboards, and light techno. You haven't heard 16-bit game music this good since the Gate/Lords of Thunder series.

Overall, I strongly recommend FX-Unit Yuki for fans of action platformers. It stands heads and shoulders above the usual homebrew games, and a testament to what is possible with competent game design and a sincere love of retro games.