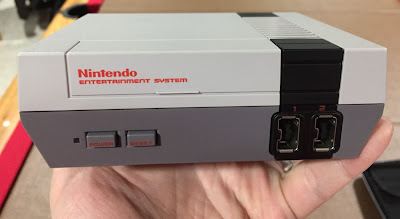 Nintendo lit the retro gaming world on fire when it announced the NES Classic Edition in the summer of 2016. Anticipation was fervent, and it was destined to be the hottest item of the year. If only people were able to get one. The quantities produced did not match demand, and so most people had to resort to the online grey market in order to get one. Selling for between 2-3 times msrp, it was the scalper's dream come true. I have never seen such a disconnect between public demand and production, Nintendo severely underestimated demand.

Fortunately (and unfortunately), I procured one at the relatively low price point when Nintendo announced that more would be produced. Ebay prices temporarily dropped, and that's when I got mine. Its a good thing I did, because the prices increased again since then.

The build quality is top-notch, as the detail in mimicking the original NES is as expected. Of course there are no cartridges, as the roms are stored internally, so the door does not open. The power and reset buttons are functional, as is the power light. Two controller ports are placed exactly where you would expect them, although they are the Wii-type connection. This means you can use the Wii classic controllers if you have them, as the Classic only ships with one.

The included controller is a nearly perfect replica. I say nearly because I found the d-pad to be ever so slightly mushier than an original, and this caused some issues when trying to block Great Tiger's hypnotic attack in Punch-Out!! Also the cord is ridiculously short. This is befuddling to me why they made it so short. Is it because in Japan, space is at a premium, and so tv sizes are smaller and people sit on the floor to play games? Even, then, this is still too short, so who knows? Maybe this was done so that licensed third parties could produce extension cords. The reset button exits you out of a game and back to the main menu, so maybe this was done to keep that action in mind, as the controller does not have a rest button. The Wii classic controller has a home button, which functions as the reset button, so if you like that controller, that's the way to go. Just get yourself a controller extension cord.


The video output is 720p, though hdmi. You can choose between three picture modes:

There are no issues with sound quality as far as I can tell, but there are people who hear things that maybe I cannot.

To the average person, and the intended audience of this product, these picture modes will be more than sufficient. While purists may scoff at the lack of video customization that other more expensive options may present, this is not directed at them. They will already have their ideal setup, tweaks and all. This is a $60 product meant to draw in people with nostalgia. With that in mind I don't feel like it should be judged harshly.
One thing that really makes this a convenient way to play NES games is the ability to save progress.  Nintendo games can be known to be unforgiving, and for a 9 year old kid with lots of free time this is a test of will; all you need is time and you can crack it. For an adult, with maybe thirty minutes to an hour to play, saving states is a godsend. You can save up to four separate states for each game, which is plenty. No more 5 hour blocks of time set aside for Rygar, or ridiculously long Metroid passwords!

The game selection is modest but deliberate, with the majority of the 30 games being first party franchises, including the mario games, zeldas, kirby, some black box games, and so on. There are a few third party games, including entries from NES-era third parties like Capcom, Konami, Tecmo, and others. Of course with only 30 games, you can't please everyone. While Nintendo tried to gather the best representation of what was available, licensing and ip ownership likely thwarted some titles from appearing (TMNT2: The Arcade Game, Mike Tyson's Punch-Out, Duck Tales, etc). Having said that, one glaring omission was the original Contra. Konami is still represented on the Classic, so why did they include the less popular Super C instead of the renowned original?

An interesting development is that there are now Chinese knock-offs proliferating the market. These have extremely similar packaging, and to the untrained eye would appear as genuine. There are several iterations of this bootleg. some have hdmi video output, some do not. Some offer the original lineup of games, some have many more. The physical case and appearance are very close. I don't have one, but I have watched several YouTube videos on the fakes and they are remarkably indistinguishable. I haven't seen a fake this convincing since the Ginga Fukei Densetsu repros a few years back. Be careful if you buy online.


So, for anyone who feels that there should be more games, there is a solution. It is super easy to hack the Classic and add whatever games you want to it using a program called Hackchi. Keep in mind that this involves roms, so whatever stance you have on downloading roms, whether you have original nes games and are using "backup" roms, that is a personal choice and not the point of this article. For me personally, I am only interested in the games I already own, plus a few that are prohibitively expensive to own (Little Samson, Metal Storm, etc.).  You can even add retroarch (an emulation program for many systems) and add any emulator that linux can support. Just for kicks, I added my PC-Engine roms to it and it plays them well. I didn't bother with SNES or Genesis as the controller would not be compatible, having just two buttons. Retroarch is also very useful to play roms that the stock emulator does not have mappers for. Some games won't play unless there is an alternate emulator installed that can (Gradius 2, for example).

The gameplay is solid, with nominal lag. With my HD tv set to "game" mode, there seems to be less lag than with other emulation methods. There are certain games that I use as a nonscientific test for lag, the bonus game in Super Mario Bros. 2 being one of them. I have a pattern that I use to get a cherry for the first box every time. If there's too much lag, I can't do it. I was able to do this on the Classic, so it passes my lag test.

So, assuming you can find one (Nintendo stated that more will be released summer of 2018), I recommend this to anyone interested in playing these games again, in HD, with a simple setup. It is very portable, great for parties, and the price point (msrp) is right. Even as someone who already owned these games, it is a fun, hassle-free device that provides convenience.