Gradius was my first real foray into shoot'em up games.  I first played it on the NES at my friend's house in fifth grade.  I remember it being one of the most difficult games I have ever played.  Up to this point I have only played Super Mario Bros., Pro Wrestling, and a few others, so the comparisons may have been skewed, but still.  My friend's brother played the game obsessively and mastered it; we though he was a god.  I couldn't even make it past the volcanos in stage one.  Despite its intimidating challenge, it ended up being one of the first games I bought for my NES.  I played it over and over until I could regularly get to stage 3.  Of course at the time, there were only four games to split my attention between, so I got to know each one in and out.

The Gradius series originated in the arcades, yet almost all of my experiences with it have been via home ports.  For whatever reason, it was never in an arcade that I went to.  That's ok, as I can just imagine the amount of money it would have demanded as arcades usually aren't easier that home versions.
For those of you who aren't familiar with the series, or need a refresher, here is a primer.  The core gameplay elements that are original to Gradius are the power up system and the "core" bosses.
Power ups are attained through selecting the type of weapon from a meter.  The meter changes the type of available weapon based on how many orange capsules you collect; the more capsules, the more powerful the weapon available.  The power ups from the first game are: speed up, missles, double shot, laser, options, and shield.  These power ups would persist through nearly all subsequent entries in the series, with additions, of course. Speed was essential, as your ship initially moves like its flying through molasses. The missiles are very effective against the pesky ground cannons, as the missiles slide along the ground until they hit something.  The double shot fires forward and at a 45˚ angle upward, taking out ceiling dwellers and canons.  This was the first time I had ever seen an "option" in a game.  The option was the best offensive weapon as each one mimicked your ship's firepower, effectively doubling, tripling, etc. your firepower.  If there was a game that had this mechanic, I am not aware of it.  The question mark (?) was the shield, which could take a few hits before turning red, which meant that it could only absorb one more shot.  After that, it disappears and you are exposed again.  Did I mention that in true old-school fashion, one hit and you explode.
This is where the glaring difficult comes into play.  Its not the one-hit deaths that make the game difficult, it's the severe drop off in power and speed that takes place when you restart after checkpoint.  You could be cruising along, powered up to the max, and make a maneuvering error right into a cliff, only to restart mid-stage with nothing but your pea shooter and SLOW ship.  You may as well reset the game or shut it off at this point, because surviving the rest of the stage in such a condition is severely grueling and unlikely.  This phenomenon is so startling, so unique to this game series that is is known as "Gradius Syndrome".  You would think that would make me hate the game. Maybe, but I keep coming back.  It is such an awesome game to play when fully powered up, that the drop off is not a deterrent.  I suppose I have just accepted it as a one-life game, and became ok with it.  Later, I heard that the infamous Konami code worked on this game (actually, this was the first game to use the code as it predates Contra by a few years) to give full power ups if entered when paused.  This was a game changer.  Now, a death does not mean I have to reset the game, I can actually have chance to get through end of the stage.  This code does have its limits, though.  The number of times that it can be used varies based on stage and other factors, but it is finite.  Even still, I have not beaten the game.  Maybe one day I'll buckle down and go for it.

One thing to be mentioned about the series is the slowdown.  Since the game is so challenging, and likes to throw everything at you, there is a ton of bullets and enemy swarms flying your way.  The amount of slowdown depends on the system, but the original version on the NES and Gradius III on the SNES are notorious for it.  I actually don't mind it, as it buys me time to plot my course on the screen.

Over the years I have scrounged up a decent collection of the series, although I know there are missing entries.  I have never been much of a handheld gamer, so those Gameboy versions are out.

When Life Force was released on the NES, I thought it was the sequel to Gradius.  In a way it was, but the real sequel was not released stateside.  I was able to play it on the Gradius Deluxe Pack, for the Sega Saturn.  It's pretty hard.  I wonder if the game publishers in Japan realized this and that was the reason for not releasing it here.
Life Force is a great game in its own right.  This game is titled "Salamander" in Japan.  I'm not sure why, as the theme of the game indicates that you are flying into some large being, with the biologial backgrounds and such.  It is pretty much the same game, except that the Japanese version forgoes the power up meter and instead you pick up power ups dropped by red enemies.  It offers two-player co-op, and supports the Konami code for 30 lives. The same power ups are present as in Gradius, except the double shot has been replaced by a ripple laser.  The game alternates between horizontal and vertical gameplay.  Due to the two-player option, your ship respawns on the spot instead of sending you back to a checkpoint.  Overall this is an easier foray and a nice choice for beginners to the series.

It's sequel, Salamander 2, was a Japan exclusive.  It has a home port on the Sega Saturn on the Salamander Deluxe Pack, and that may be the only home port.  It is a fantastic game, and

Gradius III would be a launch title for the SNES, and is highly underrated in my opinion.  Yes it gets hard, and yes there is slowdown and yes Gradius Syndrome is in full effect.  But it is still a ton of fun until you die.  The Konami code works here as well, except you use the shoulder L and R buttons instead of left and right on the d pad.  If you try the code in the traditional manner, your ship explodes...nice one, Konami.  One nice feature is the ability to edit your weapons in the power meter to suit your preferences.

Gradius Gaiden for the Playstation (Japan only, again) is what many consider the pinnacle of the series.  Even though it was being released on a system that was part of the 3D revolution, it holds to its roots with its spectacular 2D gameplay.  Another notable feature is the ability to choose your ship. 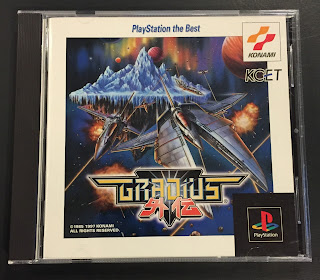 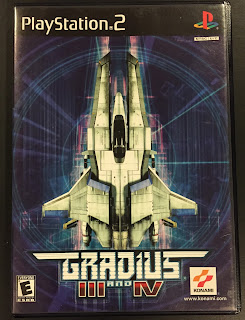 Gradius IV was ported to the Gradius III and IV Collection release on the PS2.  Here the graphics are done up in full 3D fashion, and perhaps suffer some for it.  The gameplay feels a bit tired, and the series may be losing steam as this entry seems forced. 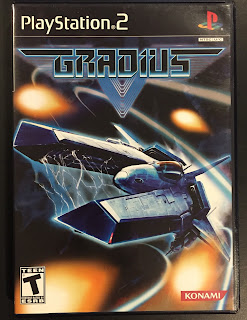 Gradius V is a masterpiece and worthy of its own post...


So I hope you enjoyed reading me ramble on about the legendary series.  Maybe you'll be tempted to pick up a controller and SHOOT THE CORE!