Maximo Ghosts to Glory Review for the Playstation 2 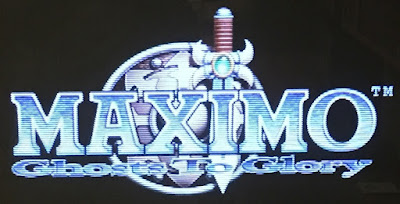 Maximo is a 3D platformer adventure series loosely based on the Ghosts 'n Goblins series.  Being a PS2 release in 2001, it was a new incarnation of the beloved series.  The protagonist is not Sir Arthur, but Maximo, a young king trying to rescue his queen from the evil king Achille.  There's other bits to the story, but suffice to say you have to rescue your girl.

The decision to bring the franchise into 3D was inevitable.  Ever since the late 90's, 2D was reminiscent of inferior gaming platforms.  There was no going back to 2D gaming, so Capcom forged ahead into the modern age.  Although it was initially conceived for the N64, it ended up being a PS2 exclusive.  I think that the game benefitted from being delayed as the power of the PS2 produces some of the best visuals on the console.  The character models have a unique style to them, balanced between a cartoon and anime aesthetic.  The stage design is well thought out, and truly retains the spirit of the platformer genre.

As far as gameplay, control is tight and necessarily so.  The double jump returns and is very necessary.  Platforms, crevices, lava, poisonous water, falling ground, and other hazards are all around you, so you need to be mindful of your surroundings.  Given its roots, the path to take is still fairly linear, as the environment funnels you in the general direction of progress.  There are still areas to explore that are partially or totally obscured, and often they are worth the time to investigate.  If you appear to be stuck, there may be hidden switches to trigger, in order to open a path.
Like all 3D platformers, the behavior of the camera can make or break a game's playability; in this case the camera does its best to keep your focus ahead of you, but if it strays due to changes in direction, it can easily be restored to behind you with a tap of the R1 shoulder button.  This seems to be one of the major complaints of this game, but as long as you get in the habit of refocusing the camera before major leaps you will be fine.


Following in the lineage of its series, Maximo is known to be difficult, although not nearly as hard as its predecessors.  You have an life bar that expands with additional armor.  Each armor segment can take a few hits before it pops off, revealing your iconic boxer shorts.

Once disrobed, you can take a few more hits before you die.  There are checkpoints throughout the stage, so you don't have to start each stage from the beginning when you die.

This time around, instead of throwing a lance, you are equipped with a sword and shield.  Initially, you have two attacks at your disposal: a slash and overhead swing.  This seems limited, but it is to force you to learn how to use your attacks in different scencarios.  Eventually you pick up new skills as power up drops, and add them to your skill set.  Your skill set has a certain number of "locked" skills, that you will not loose when you die.  The number of locked skills that you can save increases every time you defeat a boss.  There will be lots of skills to pick up, and you can decide at any time by pressing the select button which skills you want locked.  Other skills that can be obtained are the ability to throw your shield, different sword strokes, the ability to force hidden chests to the surface, and many others.
The enemies are primarily skeletons, differentiated by outfits.  They have varying attacks, weaknesses, patterns, and strength.  An attack that works on one may not work on another.  Running through the stage and hacking past everything may not work, as you'll likely take lots of damage in the process.  A better approach is isolate each enemy when possible, luring them out one by one.

Your sword strength can be powered up as well.  There are three levels to power up: the flaming sword, the glowing sword, which I presume to be lightning, and the purple havoc sword, each one more powerful than the last.
Once you pass the first stage, you enter a hub world where you can enter any of the remaining stage one worlds in any order.  It is here that you can save your progress, albeit it costs 100 coins per save.  This is one aspect of the game that I didn't care for, but coins are plentiful.  Once all the stages in the hub world are passed, the bridge to the tower in the center lowers and you can enter to battle the boss of that world.  Each one is as different as they come, and in traditional platformer fashion, trial and error is the key to success.
It is a challenging game, but a rewarding one.  It is a game that requires patience and grit to get through, but the gameplay is so good that it makes you want to try again.  It came out during a time where there were so many games realeased at once, it immediately got buried.  It is worth a second look, and can be found for just a few dollars.  If you like platformers with old-school aesthetics, give this one a chance.