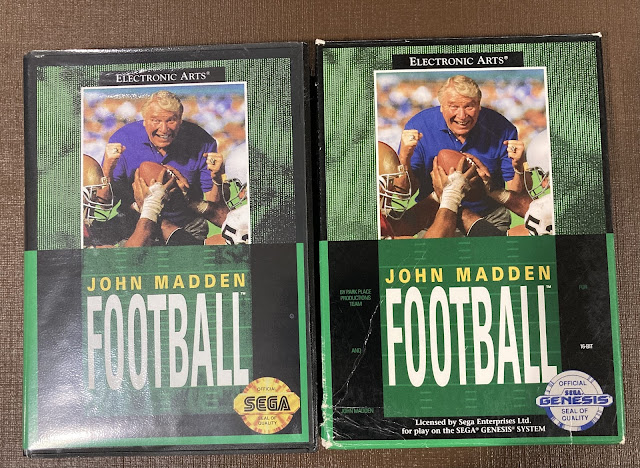 I was running an errand one day in a town that I don't normally drive to, as it is out of the way. I happened upon a Half Price Books store, and figured, why not check it out. This one was larger than the HPB store closest to me, and had a larger inventory of retro games. Despite the larger selection, nothing remotely stood out to me. To be fair, at this point in my collection I have honed my tastes and curated pretty much all that I am interested in. As I was walking out, something caught my eye. It was a copy of John Madden Football for the Sega Genesis, but it looked different. It had a shiny veneer to it, and as I walked closer I realized that it was in a Genesis clamshell case. To the uninitiated, there doesn't appear to be anything special about this at all, but having been a Genesis fan since launch, I knew that this was released in a cardboard box. The first generation Electronic Arts games were all released in cardboard boxes, it wasn't until the second wave of EA games that they switched to clamshell boxes. Realizing that there could be something special about this copy, I gladly paid the $5.99 asking price.
As far as authenticity, a natural question to ask is if it is an official copy, or if it was reproduced in anyway. I know that some people cut up the cardboard box and stuff it into a clamshell case to better match the rest of the collection. My copy of The Adventure of Batman and Robin has this.  I examined the game to my own copy, and the physical game is a one to one match, Besides, who would bother to reproduce one of the most common games in existence? The printed artwork is of high quality, and printed on slightly heavier paper that my other EA clamshell games have. The clincher is the clamshell case itself, which has the EA logo imprinted into the plastic above the game slot. I can confidently say that this is an official product.

When I got home, I googled the game. In this day and age where you can look up practically anything, I thought surely someone would have a copy of it, or at least information on it. Initially, I only found information about the cardboard boxed copy.

I did find an article on Nintendo Age about a proto-European release clamshell Lakers vs. Celtics, of which the author of the states only 13 copies have ever surfaced. This is relevant because that was an EA game also released in a cardboard box, and perhaps they had a similar backstory. A Nintendo Age forum user by the name of Supergamboy posted a discussion, in the comments and revealed a picture of the same clamshell variant of John Madden Football!  I was unable to contact the author, as I am not a member of Nintendo Age and their registration link appears to be closed. So now I know that my copy is not alone.

I reached out to several prominently-known Sega enthusiasts, people who know Sega through and through, and only one, Sega-16 founder and author Ken Horowitz, knew of its existence. He told me that it was this was either the first iteration of the transition to clamshell cases, or leftover European stock, which used clamshell cases.  The lack of UPC code on the case leads one to presume it must have been a sticker on the shrink wrap.

So after all there are little nuggets of information out there, but it's definitely not common knowledge. I can find no record of the on eBay, so I cannot directly gauge its value. According to the Nintendo Age article, the aforementioned European Lakers vs. Celtics garnering bids for around 8000 British Pounds. I'm not suggesting that is what this copy of John Madden Football is worth. That was a different situation where the release almost happened and a few copies squeaked out.

I am very curious to see how many people have a copy. It is definitely the most interesting retro find I've ever stumbled upon. Who knows, it could be an ultra rare collectors piece that would pay for my kids' tuition. If you do have this same copy, please get in contact with me.