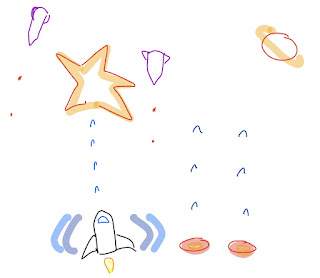 Shoot 'em ups, shooters, or "shmups" are two-dimensional games that involve some flying ship that shoots at lots of enemies. They are were one of the most popular genres of video games historically, with roots all the way back to Space War, Space Invaders, Asteroids, etc. The genre remains popular today, with modern releases favoring the 2D style. I prefer the silver age of shooters, which centers around the 8-16-32 bit consoles, including the NES, PC-Engine (Turbo Grafx-16), Saturn, and Playstation. For clarification, the term "shooters" is my preferred way to reference them, as that was how the genre was named back in their heyday. Shooters is not to be confused with the modern first-person shooter war sims like Call of Duty, Halo, etc.

Shooters are generally known for their difficulty, and to newcomers they can be intimidating, and inaccessible. Many devout fans of the genre are well versed and practiced, so their opinions of the best games will often favor games with high challenge. Examples of highly regarded but very difficult games are Battle Garegga, Gradius, and R-Type. These games have every right to be named in the pantheon of retro shooter greats, but they're not entry level material. I wanted to highlight some games that can ease new fans into the genre, and not obliterate them instantly. Games that allow for clear, linear progression of skill development, even if erring on the side of too easy are the focus. It should be mentioned that games with an easy setting fit in nicely here, especially since the settings can be upped as a player improves.

These are in no particular order:

Unrelated to Capcom's 194X series of games, Strikers has a similar initial setting and appearance, but quickly eschews the WWII theme for gigantic, robotic aliens and screen-filling fire power. There are three games in this series, but the first is listed here as it is the easiest of the three. The game setup has seven difficulty modes, including the easiest, called "monkey". This is a good place to start for any beginner, as the difficulty increases a bit with each stage cleared. Another reason it is good for beginners is the charge shot system. Once you acquire power ups, you gain little helper drones that increase your firepower. In addition, when you charge your shot by holding the fire button down, your drones assemble in a concentrated fire formation, easing the boss battles. This can be done an unlimited number of times, but you are unable to fire during the charging period, which lasts anywhere from one to three seconds, depending on your craft. It is a tremendously helpful tactic, and enhances the gameplay experience as well as replay-ability as you explore each of the different planes and their unique abilities.

Blazing Lazers is a simple, straightforward game that doesn't do too many things that are flashy, but it is rock solid in execution. Your ship has selectable speed, which is always a welcome feature, but it's probably best for beginners to leave it set to level 2. There are four different weapon power ups, each increasing in power with additional orbs collected. The enemy patterns start out as fairly basic, and gradually become more interesting. The enemy shots don't reach a fervor until about the 5th stage, which is plenty of time for a learning curve.

Good shooters on the NES are a rarity, even though there are a plethora. The programming during the 8 bit era was rough in the early days, which let to a glut of half-baked shooters in name only. The precision of control for the quick pace of shooters was hard to nail down, leading to games that felt slippery and too fast. Examples include Sky Shark, Star Force, Tiger Heli, Zanac, and so on. Gun Nac has the control dialed in perfectly. Power ups are plentiful, and can even be purchased inbetween stages with the cash collected from enemy drops. Bombs are plentiful as well, and come in several varieties. If you refrain from collecting everything, and only collect consecutive bombs of the same type, their power increases. Sporting a linear difficulty curve, Gun Nac lets you enjoy the oddball enemy design during gameplay. 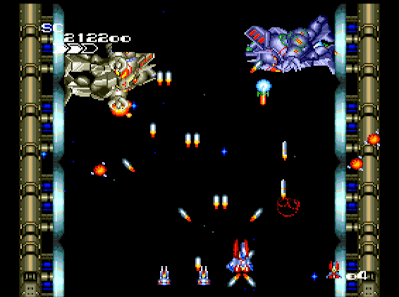 Oft considered the black sheep of Hudson's soldier series, Final Soldier unfairly gets a bad rap. Just because it is regarded as the weakest of the three does not make it a bad game. I actually prefer this game over Super Star Soldier, which is normally considered the runner up to the magnificent Solider Blade. Final Soldier eases you in, showering you with all varieties of power ups so you can get a taste of each. Like most shooters, collecting consecutive power ups of the same type increase the level of the weapon. In addition, secondary weapons are helpful as well, specifically the options that can be sacrificed as bombs if the need arises. While the game may seem too easy to veterans, it's a lot of fun, and you don't really get bored. For anyone trying shooters on the PC Engine for the first time, I recommend this as the first one to try.

Raiden was always a game I played in the arcade whenever I saw it. It has textbook pick-up-and-playability. The movement is simple, firing is simple, and the bomb is self explanatory. Power ups come in two varieties, with successive pickups increasing the power. The default arcade game is a classic quarter muncher, accelerating the difficulty by the end of stage one. The game had numerous ports to home consoles, but the one that stands out is The Raiden Project for Playstation. It included Raiden and Raiden II, and was loaded with customizability. The difficulty settings open this game up to all skill levels. Button configs, number of lives, continues, etc., are all included. The game may appear overly simplistic, but it was executed well, and that's what keeps people coming back.

On the surface, there doesn't appear to be anything special about Fire Shark. You fly a 1920's era biplane, and enemy and stage design is rather pedestrian. The draw here is the fire stream power up. It is a visceral, lashing, death stream that obliterates anything on screen when powered up. Once you are at maximum, all you need to worry about is dodging bullets, as enemies are vaporized the second they appear. It does take time to get to this point, and that might be easier said than done, but with some practice there's nothing tricky or mystifying about it. Some say the game is too easy once powered up, but I say just enjoy it. The other power ups are O.K., but I found myself avoiding them so that I didn't lose the fire stream. That might be the hardest part, since at some parts of the game the screen is jam packed with green power ups that are just as hard to avoid as bullets, as they don't leave the screen for a long time.

So there are some easy going shooters for retro consoles that I recommend to anyone who is interested in the genre but doesn't know where to start. I think it is understood that original game prices these days can be cost prohibitive, but there are other means to access and play these games. Some of these games are region locked, like Final Soldier and Strikers 1945, but that won't matter if you use emulators, flash carts, or optical drive emulators. I hope some people out there take these suggestions, and start easing into the vast genre of shoot 'em ups.