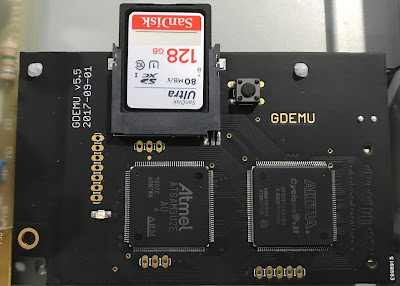 Obtaining the Rhea ODEUM in my Sega Saturn, was a watershed moment for me. Now almost all of my retro consoles are all outfitted with devices that can call up my entire collection for any system. Years ago, I loved getting up, picking a game off the shelf, and changing the game. It was the part of the nostalgic draw: fingering over the spines of game cases, reading over the boxart, and deciding what to play. Lately, I just turn on the console and scroll through which ever menu pops up, whether its an Everdrive or an ODEMU (for those who don't know, Everdrives are cartridges that allow you to play games from an SD card, and ODEMUs are boards installed in a disc-based console, which read games from an SD card as well). I have simply become accustomed to this practice.


There are a few reasons why I play original carts less and less. First, I found myself having to clean the contacts on games more and more. A typical sitting would have me cleaning three to four games, which gets old quickly, and takes a few minutes per. I keep all of my games in cases of some sort; original Genesis clamshells, universal game cases for SNES, and BitBoxes for NES.  I would clean a game if I even suspected that it was slightly dirty. I was always paranoid of putting a game with dirty contacts into my consoles as the that dirt would transfer, and it is way more difficult to clean the contacts in a console than on a cartridge. Granted, the games are thirty years old, and corrosion is expected, but it was getting to be too much. However, with an Everdrive I just leave it in the console, and since it is newer there is no need to clean it - it loads up every time.

Another reason is time. Anyone who has kids will attest that there is less time for gaming, so the act of perusing the collection and selecting a game is time not playing. It sounds weird to say it, as I spent hours curating the reproduction cases for my carts. I still appreciate them, they lovingly adorn my game room, but I don't need to see the case to know if I want to play it anymore.


The third reason is game protection. Don't get me wrong, I have always been a gamer first and collector second. I never buy sealed copies of games because I don't think they are worth the premium, and unplayed games take up space. I will play any game that I own, any time. However, there are some games that have steadily climbed in value, and it is almost "safer" to play the roms of games rather than the games themselves. Specifically, Sega Saturn games that are outlandishly valued I would just rather keep out of harms way, especially when playing with the kids or with company.


There was a time when I was determined to play the real cart, convinced that there was a difference in the gameplay experience. This is true of real hardware vs. emulation, but not true between original carts/discs and SD card devices. The data send to the console's processors is still the same data, the console does not treat it differently.

Lastly, its just too easy to play games from these devices, especially when game are organized in menus. I have found myself playing more games that I normally would not have pulled off the shelf, simply because I know that loading it, playing it, and abandoning it takes almost no time at all. I can be reminded of why I don't play a certain game as often, and just press a button combination to get back to the main menu of games. So, maybe it boils down to laziness.

Does this mean that I will never play my original copies of a game again? No, but probably less so. Maybe this is just a phase, maybe next week I'll be exclusively be original discs and carts. Only time will tell if that is truly the case.