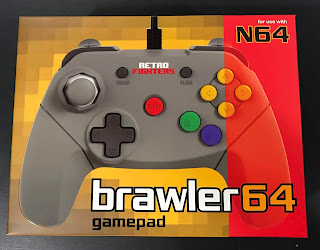 I'm not a huge fan of the original N64 controller. I find it bulky, but not in a satisfying way. It is unergonomic when using the "main" part of the controller, the analog stick. Your wrists are unnaturally close together when holding the center and right grip, causing strain after some time. The left grip, or 1/3 of the controller,  is used for the d-pad, which is an afterthought as there were so few 2D games made for the console. The d-pad is surprisingly subpar, and given Nintendo's legacy of awesome NES and SNES controllers this is a shock. The A and B buttons are fine, and there is some ingenuity with the differently-sized C buttons, making them easily distinguished by touch. The shoulder buttons are fine, no complaints. The trigger, or Z button is on the center prong, along with the analog stick. This means you fire with the same hand that you move with, which is opposite of most first person shooter games today.


When I heard the Retro Fighters was releasing a modern-layout controller for the N64 I was intrigued. I preordered one right as the initial batch was released. The initial release was panned by reviewers for a physical issue - the left shoulder button was catching the analog stick when the stick was pushed in a certain direction. This was no good, and the company worked to resolve the issue. I was worried that my order would be one of the first iterations. I have just received mine last week, and I am happy to say the analog stick/shoulder button issue has been resolved. 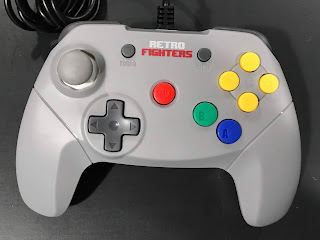 There were two reasons I purchased this controller. First, the overall shape has been modernized, assuming a more conventional design with two handles. The overall size and form factor feel comfortable and familiar in the hand, an immediate improvement.

The second reason is the analog stick. The original stick was long, with a plastic thumb tip, not unlike a golf ball tee. It would eventually grind at the base of the plastic concave fitting, and loosen over time. All controllers loosen over time, but the N64 controller did so to the extreme. The new analog stick feels like a Playstation 2 stick, both in shape and texture. While these are positives, the stick has an odd octagonal gate at the base, preventing smooth rotation if pressed to the limits; a jarring, bumpy rotation results. Again, this only happens if you press all the way to edge and rotate, otherwise you will not notice it. 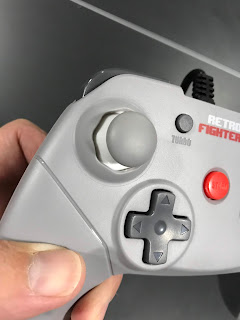 The original analog stick, being slightly longer than the average analog stick, offered better precision. Because it was longer, it offered a greater level of control when compared to a shorter, stubbier, modern analog stick that we have become used to. Imagine steering a car with a large wheel and a small wheel. Each motion on the small wheel would result in a large movement, whereas the same amount of motion on a large wheel would result in a smaller movement. This is noticeable when playing Mario 64. The range of motion between walk and run is noticeable and controllable. When
using the Brawler 64, there is less control in between walk and run. You can get used to it, but it will throw off seasoned players.

The port on the bottom of the controller allows for either a rumble pak or memory card. I have had no issues using either, although I hear 3rd party products do no always work here. I am also told that the transfer pak for Pokemon games does not work as well. I do not own these games so I cannot comment on that. 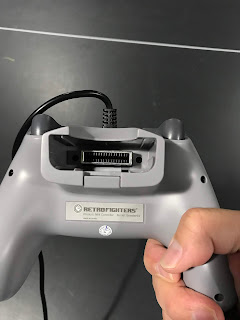 All in all, I find it a much more appealing and comfortable controller than the stock controller. I have used this for all of my N64 gaming since I purchased it, and have no regrets. The shortened analog stick does take some readjusting to, but I think it is worth it. I am not an N64 enthusiast, so I'm sure there are some game-particular nuances that I may be missing, but from a general perspective, I recommend this to anyone who has ever had issues with physical configuration of the original N64 controller. You can purchase one at https://retrofighters.com/#home for $30.