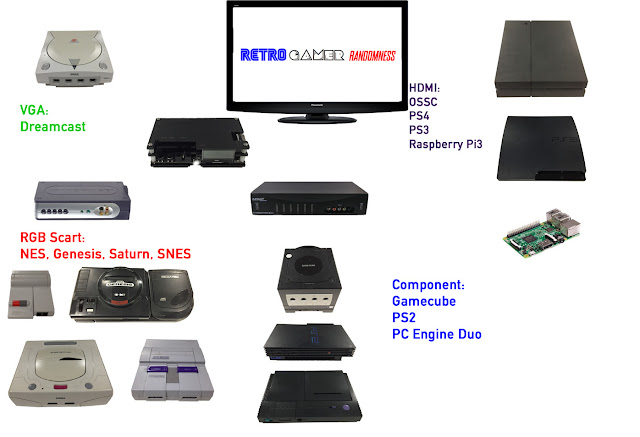 Any retro gamer knows that a gaming setup changes over time with the addition/subtraction of hardware, consoles, TVs and technology. When I started this blog, I documented my setup here. A few years have passed, and There have been some changes. Back then I had two separate gaming TVs: a 37 inch LCD and a 32 inch Sony Wega CRT. The consoles connected to each were determined by videou output. Since then I have streamlined my two setups into one. The reason was two-fold: I acquired an Open Source Scan Converter, which allowed the older consoles to be properly displayed on an HDTV, and I wanted a single space for gaming.

The vast majority of the connected consoles are of the 4th-6th generation of consoles, with only a few HD systems. Combining these requires a variety of video switches, along with a cheat sheet listing what is connected to what.

Here are my connected consoles as of January 2018: 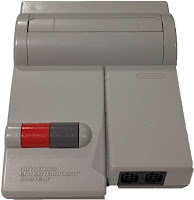 This was my first modded console. I have an original "toaster" model, but once I entered the world of RGB video signals there was no turning back for me. The original NES could not process RGB video. The picture processing unit (PPU) chip harvested from an old Playchoice-10 arcade machine, was one of the first ways to get RGB from an NES. A Nintendo multi-out connection is fitted in the back to connect to a scart cable. This console requires the most work to get an RGB signal from, but it is still worth it to do so if you covet original hardware.
NES --> scart switch --> OSSC --> TV (hdmi)

The Saturn is a console that I missed entirely during its lifespan. I happened upon it after it the Dreamcast died. When I started gaming again in the early 2000's I focused on 2D platformers and shoot' em ups. While the platformer selection is lacking, its shooter and 2D fighter library is unparalleled. The Saturn is region locked, and nearly all of the best shoot'em up and fighter games are Japanese exclusives. This is easily overcome by using an Action Replay cart...or by playing on an actual Japanese Saturn! The Saturn outputs RGB natively, and so a scart cable is necessary.
Saturn --> scart switch --> OSSC --> TV (hdmi)

The first version of the model one Genesis was non-TMSS, meaning the trademark message does not load onscreen prior to the Sega logo. Stereo output is accessible from the front via a headphone jack.  The audio output from the rear is mono, so in order to connect the stereo sound to the TV, a separate audio line is wired into the scart cable. A Sega CD model 2 unit is attached underneath. An extender plate fills in the gap underneath to make up for the longer Model one Genesis, as the model 2 Sega CD was designed with the Model 2 Genesis in mind. The RGB output of the Genesis is very striking and the easiest to notice the jump in video quality. I debate about removing the SEga-CD; I just don't play those CD games that often. I'm not in dire need of space at the moment, so I'll leave it for now.
Genesis --> scart switch --> OSSC --> TV (hdmi) 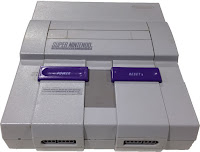 I didn't grow up with a SNES, but my friends did. Those were days when kids had one console at a time, and mine was a Genesis. Happy to have it now. The SNES outputs RGB natively as well, and the 1-chip version has sharper image quality than others. I have not made comparisons myself, but it seems verified online through several sources. It looks great anyway. I pulled out the physical tabs that obstruct Super Famicom carts from being played - this is easy to do and necessary as some carts are prohibitively expensive for U.S. versions, but cheaper for Japanese versions.
SNES --> scart switch --> OSSC --> TV (hdmi)

Like the Saturn, the Dreamcast has quite the shoot'em up and 2D fighting library. And like the Saturn, some of the best offerings were Japanese exclusives. Initially I used a CD swap disc to play imports, but that go old fast. I found this one with the region-free bios for not much more than a regular Dreamcast and jumped on it. The video output of the Dreamcast is unique in that it is the only console of its time to output 480 progressive scan through VGA, which is the signal that I use into the OSSC. I have heard of advanced VGA boxes for the Dreamcast, but I think it looks fantastic this way.
Dreamcast (VGA) --> OSSC --> TV (hdmi) 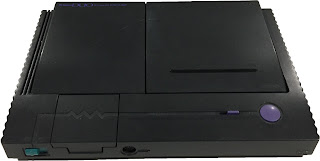 The PC Engine was known in the west as Turbo Grafx-16. It was barely noticed here, overlooked as Nintendo and Sega were battling for market supremacy. In its home country, the PC Engine did quite well, and its Japanese library dwarfs its American offerings. A system heralded for shoot'em ups, it became a priority for me to explore. Games were released on both Hu cards (credit card-sized chips) and CDs. The CD system was the first of its kind, and was an add-on to the original systems. The PC-Engine Duo combined both into one unit, and so offered convenience as well as savings. The original video output was composite, but I had mine modded for component. This was a system that was somewhere inbetween 8 and 16 bits. The cpu was 8 bit, but the graphics processor was 16 bit. So while gameplay mechanics and processing was on par with the NES, the visuals and audio were 16 bit. The CD games obviously had superior audio output, with recorded tracks in lieu of chip tunes. Some games made better use of this than others, like Gate of Thunder and Lords of Thunder.
PC-Engine Duo --> Component switcher --> OSSC --> TV 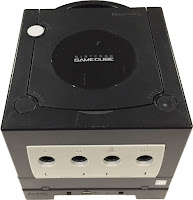 There's not too much to say about the Gamecube, other than the specificity of its component cables. The Gamecube generated high quality digital video, which was throttled down to analog signals for TVs that were not ready for such progress. The component cables have a specialized chip in them that enables the digital video signal to be sent, the highest quality possible. I have a gameboy player attached as well.
Gamecube --> Component switcher --> OSSC --> TV

The backwards compatibility of the PS2 and on board DVD player were the two major reasons that the PS2 became the juggernaut that it was. A motif throughout this post is that shoot' em ups were a deciding factor in what consoles became my favorites. The PS1 and PS2 both had plentiful offerings...in Japan. This PS2 has a region-free bios installed for that reason. Component video output is standard. I have a 120 GB hard disk drive installed, and I have installed some of my own game on it for convenience.
PS2 --> Component switcher --> OSSC --> TV

This is my second PS3. My first was a 60 GB, fully backwards compatible unit that had heat stroke and basically melted itself. The slim model was more efficient and had better heat dissipation, making overheating no longer an issue. I have a couple dozen games, but my interests do not lie in modern gaming.
PS3 -- HDMI switcher --> TV 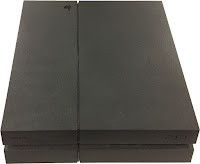 The Raspberry Pi 3 is either embraced or scorned by hardcore retrogamers. I wrote a little about it here. I have this connected on this TV, but often I move to a larger room when we have lots of people over. I currently have it in a NESPi case, which obviously resembles an NES.
Raspberry Pi 3B --> HDMI switcher --> TV


I also have a SNES Classic Edition hooked up at the moment. I hacked mine to add my favorite games.
SNES Classic --> HDMI switcher --> TV

You may ask why the redundancy between the original consoles, RetroPie, and SNES Classic? My answer to that is why do people like to drive classic cars, even though they already have a car? Why do people listen to vinyl even though modern forms of media are available? Something about the authenticity of original hardware makes it a different experience. I had a hard time letting go of my CRT, but in the end I'm happy with my decision (I still kept it, as good ones are getting harder to find).

Here it is altogether. I found the TV stand on Craigslist a few years back. What sold me on it was that it had enough space for my favorite consoles, it was sturdy, and it was only $20! My HDTV doesn't quite fill the space, so there's room to upgrade in the future. The speaker bar was a present and really improves upon the sound. My PS3 and PS4 are standing vertically behind the TV. I decided to keep the WiiU in a different room, as my kids play mainly that with their friends. There is an unholy mess of cables and cords hidden in the rear of the stand, well out of sight. The clean look is pretty important to me (and my wife!). Controllers are in a basket nearby. I also setup dedicated power strips so that its not drawing phantom power all the time when not on.
I'm really happy that I was able to condense my retro with current systems, and the key to all of that was the OSSC and some switch boxes. 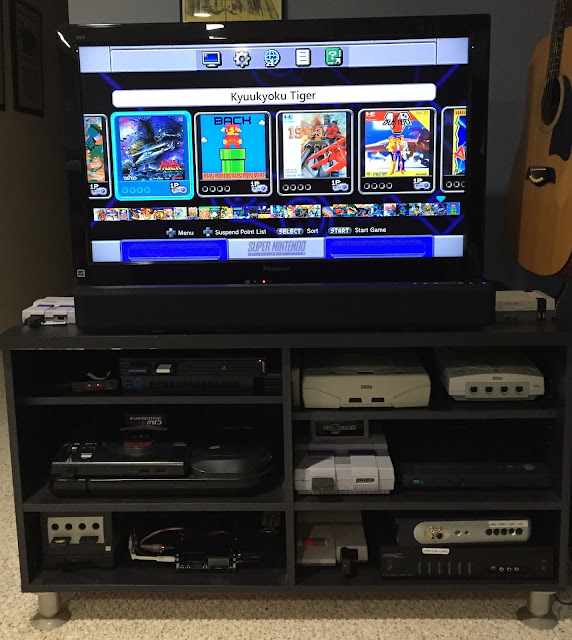 So, I just wanted to share my take on integrating older generation consoles with modern display, and how it looks altogether. It's not for everyone, but maybe someone will read this and have some of their questions answered and be willing to do the same. If you have any questions feel free to email me or leave a comment.