Review: Gun Nac for the NES 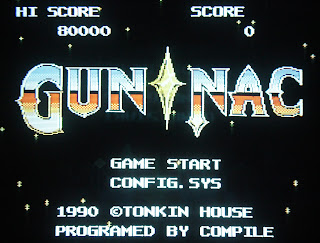 Shooters on the NES are a mixed bag. They were plentiful, but due to hardware limitations, they were very basic and similar in most regards. There are dozens of shooters, but only a few are held in high regard. Gun Nac is one of them.

The game was developed by Compile, and its heritage shows. Your ship has that "basic" Compile look to it, as seem in Power Strike, Zanac, Space Megaforce, and others. Ship handling is tight,  responsive, if maybe a tad too fast.

Power ups are decently varied for the era.
1 - wide ranging vulcan shot - good for beginners
2- large round shot that fragments latterally - fancier but difficult to survive with on later levels
3 - homing but weak scythe-like shots - good for beginners as it makes the stages easier, but ineffective for harder bosses
4 - pulsing flame thrower - it shoots out at length with the initial button press, then its range gradually shortens until pressed again. Effective but tricky to use.
5 - piercing laser - strong, but difficult to use as your shot needs to be lined up to be effective; a good choice against bosses.

Each one can be powered up by collecting the same numbered icon, or "p" chips; another developer staple. Getting hit will lower your shot power; getting hit while on the lowest level results in death.


As an interesting addition, there is a shop that you visit between each stage, where you can purchase weapons and upgrades with the cash that you picked up during the stages. Depending on which difficulty setting you play on, this may or may not be helpful. I found myself not needing to buy power ups until the later stages.
There are several different bombs that you can collect, each denoted by a letter. The more of a specific letter you have collected, the more powerful the effect. You can hold up to 20 of them, but you don't know how many of each you have. These are plentiful.

The programmers at Compile knew how to squeeze everything out of the NES cpu, as there is always a screen full of activity. The enemy variety is superb, and enemies are unique to each stage.
In stage one, the primary enemies are variations of robotic bunnies, as follows with the storyline. There are big bunnies, medium bunnies, carrot projectiles, and a big boss bunny. While these enemy sprites are cute, well designed, creative, and weird. Some examples of enemies include:
flying matches, cigarettes, giant candles, matchboxes, fortune cookies, battle ships with octopi sailors, tentacled creatures, mermaids, and so on.

The action is very lively and fun to take in. There is an abundance of different enemy sprites, all unique to particular stages. If there is one downside to the graphical presentation its the backgrounds. These are pretty standard fare, and sometimes the color use is questionable. I suppose when using the majority of the NES's color palette for the sprites, the leftover colors are used for the backgrounds. Despite this, there's more than enough interest and intrigue in the visuals to make this game a looker.

When powered up, the game is on the easy side for shoot' em up veterans. Newcomers to the genre and casual gamers will have no problem stepping as the difficulty curve is a gradual one. Power ups seem to litter the screen at times, so getting powered up again after dying is not as harsh as other games of the era, like Gradius.

I enthusiastically recommend playing this game. Its accessible, interesting, fair, and lot of fun. I find myself coming back to this one over and over again. The cart is, as with many vetted classics, pretty expensive, but if you have the means to play Famicom games that may be a cheaper alternative, or just use an Everdrive or emulation. Any way you get to try it, I think you'll like it.