Blast Wind for the Sega Saturn 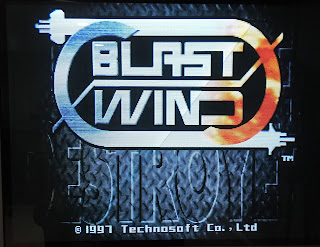 Blast Wind is a 2D, vertical scrolling shoot'em up for the Sega Saturn, developed by Tecnosoft (of Thunder Force fame). It was only released in Japan, as were nearly all of the good shooters (exceptions being Galactic Attack and Darius Gaiden). If you're reading this, you may be aware of the seemingly endless ascent of prices for games like this. Since the Saturn is one of the few retro systems left that have yet to be emulated with any degree of success, physical copies are in high demand. This game is no exception. Some Saturn shooters are worth the coin, let's see if this one is. 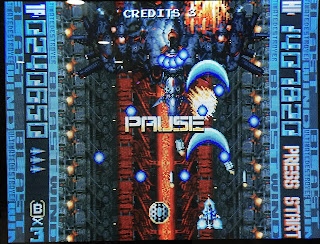 Right out of the gate the game has sharp, clean visuals. The sprite designs are not quite as inspired as other Tecnosoft offerings, but there is lots of color. The sound mixing is unbalanced, as the sound effects of enemies being destroyed drown out the music completely. From what I can hear of the music, it sounds like it would have been good, but I can't be sure. This was a missed opportunity, as Tecnosoft is renowned for is music composition.

The gameplay is pretty vanilla in that the enemy patterns are too straightforward/predictable. It seems like they were programed by their "B" team. At least your craft controls well, and your sense of speed is spot on.  You have a main shot which fires straight, and can hug walls when. Your secondary shot is a less powerful homing shot, which can also be powered up. After a few power ups you become equipped with missiles. These are not that helpful, as they seem to drop out of your ship first, before firing off towards enemies, and this delay is not helpful when in a pinch. Bombs are typical screen-clearing affairs. An interesting mechanic is that every time you pick up a power up icon, you shoot this electrical beam out laterally across the screen, for what seems to be some significant damage dealt. This can be used strategically, if timed right.

The game is known for its branching paths, determined by whether you hit switches as they appear. This adds some replay value, but I think you end up at the same boss either way, so what was the point? There are other switches thorughout levels, some which offer power ups and some which cause some sequence of events (?) - not too sure what the effects are. 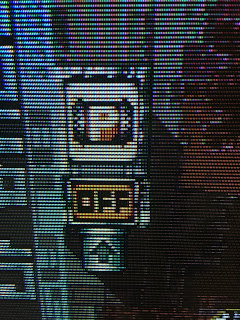 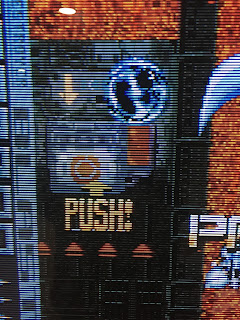 Another thing to notice is that throughout the game there are "gorn" markings all over the place. I thought back to where that sounded familiar, and I realized the in the Thunder Force series, "Orn" was the enemy race. So perhaps this game was initially created as a Thunder Force game, but they changed concepts late, and slapped a "g" infront of the "orn" signage? It just seems like more than a coincidence. 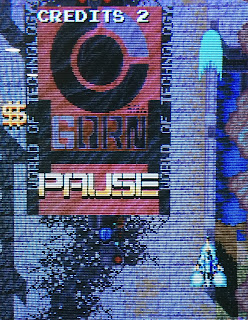 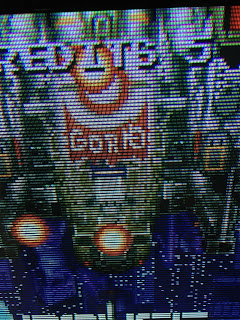 The background graphical detail is cool, with little people walking around on cat walks in the base. They're not even ducking for cover, they're just out for a stroll. Later on they are called upon to enter the giant ship to combat you. There are also horses grazing in pastures. This reminded me of the cows in Raiden. The borders on the side are ridiculously obtrusive, it almost seems like the game started out as an arcade, so a vertical aspect ratio was needed, and then when produced for the Saturn, the borders were added to fill space instead of stretch the screen. 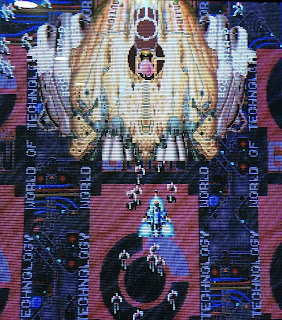 The game is pretty short, clocking in at six stages, with no 2nd loop. Personally, I don't mind short games, my life affords gaming is short stints anyway, but many hardcore shoot'em up fans want that 2nd, extra hard loop in their games.

So, in the end, its good, not great. Its definitely not worth the current asking price of $300+ dollars. The shooter market for the Saturn has gotten a lot of notoriety, and collectors are scouring the ranks, so nearly all Saturn shooters are expensive now, whether the game is worthy or not. I'm just glad that I'm not looking for these any more.