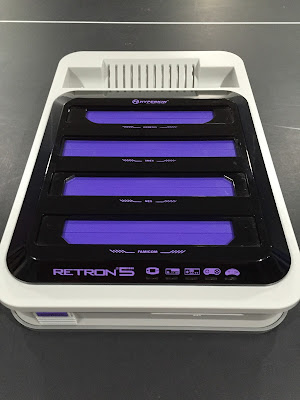 The Retron 5 is a modern clone console produced by Hyperkin, makers of several other clone consoles based on 8 and 16-bit technology. The console plays actual game cartridges for the NES, Famicom, SNES/Super Famicom, Genesis/Mega Drive, Game Boy, Game Boy Color, and Game Boy Advance.  If you have a Sega Power Base Convertor, you can play Master System games as well. 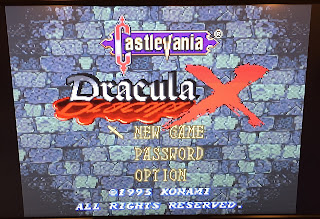 While many gamers are purists and would scoff at the notion of using a clone system, the Retron 5 does address some of the issues of trying to play retro games in this day and age.  For one, older consoles look like crap on high definition televisions.  The Retron 5's hdmi output is simple and clean, and looks great. Console purists go to great lengths to get the best video output from their original systems, which may necessitate modifications, extra cables and adapters, and in general, greater additional cost. Not all people are as hardcore to go through all of that, and if that's the case, the Retron is a nice substitute.

A second benefit is the all-in-one form factor;with the Retron 5 you won't need to clutter up your tv stand or media center with multiple consoles (a plus if you live with others who don't share your retro gaming enthusiasm). Let's face it, retro gamers usually play more than one retro system.

The system does not actually have the hardware inside for all of these systems like most clone systems.  Instead, it is an android based system, running emulators for its game operation. Once a game is inserted, the rom is dumped into the memory, and the game is playable.  Once the game is removed, the memory is wiped. This would make it seem as if the game were being read in real time, when in fact, the game is not accessed after the original dump.

The emulation explains how it can output digital video in high definition, when the original game systems could only output analog systems at 240p. This also means that some games may have minor differences in how they play through emulation, when compared to being played on original hardware. These may include input lag, sound variances, and lack of slowdown (which some actually find nostalgic, depending on the game). The firmware is upgradeable through the SD card slot, which has come in handy already with fixes to bugs and game incompatibilities. 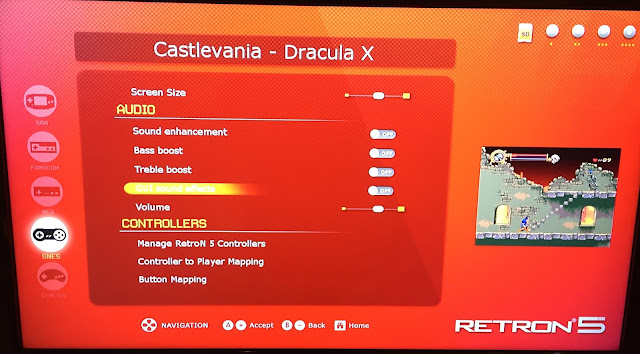 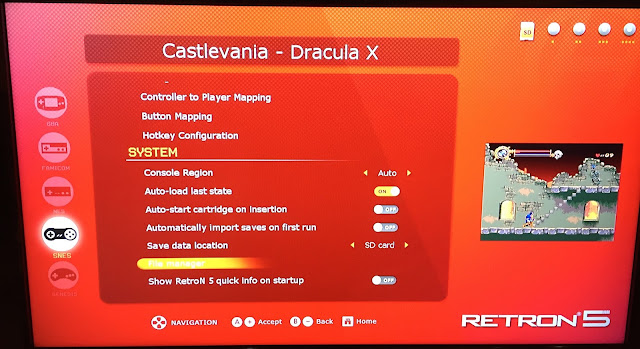 Other features that are available are:
save states -  This was new to me as I never was into emulators, and while I don't use them often, there are times when they are really helpful (Ninja Gaiden).

graphic filters - Again, these were foreign to me and still are. I don't think any of them look good; they look as if pertroleum jelly was smeared across the screen.  To each their own, I guess.

scanlines - I love scanlines. Some games just don't look right to me without them.

screen shots - This was cool.  I'm not into capturing video footage of gameplay, but being able to take a screen shot during gameplay is pretty nice, and it is a reason to use the console more.
Perhaps the best feature of all, controller ports for original NES, SNES, and Genesis controllers.  The system auto-detects which controller is plugged in, and you have the ability to map buttons however you like. The controller that is packed with the system is serviceable, but barely.  The brick-like shape is oddly un-ergonomic, and instead of a d-pad there is a micro-switched circular disc.  This is an odd choice for a system designed for retro games that only knew d-pads. I find the precision sloppy and the clicking is distracting. I use my 6-button Genesis or SNES controller for nearly all of my gaming on it, regardless of system.

A recent development is the ability to patch games of a different region, so that the text is translated to English.  This is a boon to rpg players, as Japanese rpg games are super cheap to import, whereas many domestic releases are highly coveted and inflated in price, like Chrono Trigger and Earthbound, to name a couple. I have not personally done this, but it seems easy enough to do if you follow tutorials online.

How exactly the company acquired those emulators is a polarizing point of contention, and can be a big enough deterrent for many potential buyers. The Retron 5 utilizes open source freeware that were meant to for noncommercial use, packaged in a product for sale. Needless to say, there has been quite the backlash in the retro gaming community. It is a shame that the company had to take the route that they did, only to get caught and try to backpedal out of a moral embarrassment.  I found this out after I had purchased one, and had I known this beforehand, I'm not sure I would have bought it. I can't stand on a moral high ground here, as the law on emulators, roms, reproductions, and the like are nebulous, and I do have some repro carts and have used emulation here and there.  Everyone will have their own opinions, and thats perfectly fine.

One thing I find curious about this is system is: who was the intended audience? Hardcore gamers would have found the optimum connections for modern tvs through upscaling solutions.  Maybe some people buy it to reduce the wear and tear on their original systems. Casual gamers would not have enough retro carts on hand to make use of it.  The design choice of having rom dumps that necessitate actual physical carts suggest an authentic gaming aesthetic, yet utilize the most unauthentic technology.  Perhaps it is for the retro gamers that have plenty of old carts, but are not hardcore enough to go all-in with video conversion and upscaling.  Perhaps I fall into that camp, sort of.  I have my retro systems connected via RGB scart, transcoded into component, and displayed on a Sony Wega crt.  My hdtv has my modern systems and the Retron 5.  When I play retro, it is almost always with the crt. I do play the Retron 5 when friends come over, as that room has more seating. So in my case, it has its uses, but I don't need it. It would be interesting to hear other peoples' experiences with it.  Feel free to leave comments below, and thanks for reading.