Game Compilations for the Sega Saturn


If you have read any of my previous posts, you will know that I am a Sega Saturn aficionado.  It may have been the black sheep of the fifth generation of consoles, but it was my favorite.  As I mentioned in my previous post, I just couldn't get into early 3D graphics and gameplay, especially when hand-drawn 2D sprites were looking so good!

Now, the vast majority of the Saturn's best games were not released in North America.  Sega of America had a cooky aversion to 2D gaming, as it gave the appearance of being behind the times. This was unfortunate as we missed out on a plethora of excellent games.  Some of these games could have turned the tide of the console war, or at least balanced it somewhat, especially since there was no language barrier and an action replay cart is all you need to boot them up.

These titles were released as compilations, each containing two or more games. 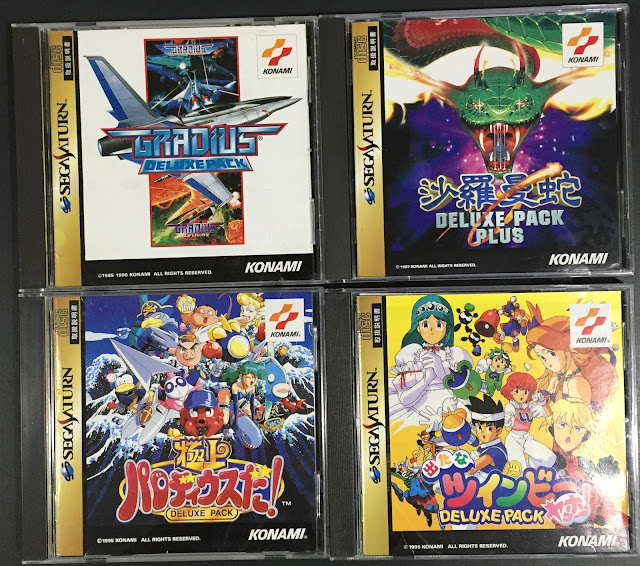 The Gradius Deluxe Pack
The Gradius series is long known to be one of the forbearers of the shoot' em up genre.  It contains arcade-perfect ports of Gradius and Gradius II.  Even though there were ports released stateside, there's nothing like a pixel-perfect arcade port. Difficulty and other options are available in main menu.  As much as I love the genre, I am no professional and need all the help I can get.  Easy setting it is (which is not so easy)!
Gradius II was never released here.  Many thought that Life Force was the sequel to Gradius, as there was no evidence to the contrary.

Salamander Deluxe Pack
Salamander was a spin-off of Gradius, with many of the same gameplay mechanics, but a twist: power ups were picked up directly, and there was no power meter with selections to choose from. Another thing that makes the Salamander series different is two-palyer cooperative play.  Struggling through the tough as nails levels is more fun with a friend.
It was named Life Force when brought to the NES, and modified to have power meter and red capsules, so its no wonder people thought it was the sequel to Gradius.
Salamander II is awesome and in need of some form of international re-release.
Parodius Deluxe Pack
Parodius is named for the fact that it is a parody of Gradius. Imagine the gameplay of Gradius, but imagine having the option to replace the Vic Viper for a either a penguin, octopus, or Twin Bee.  The stages are outrageous and the enemies bizarre.  Power ups are based on the Gradius system, with Twin Bee bells added for good measure.  The two games included are Parodius Da! and Ultimate Parodius.  Oh, these are still Gradius games at heart, and so they suffer from Gradius syndrome, as expected.  Still fun, though.

Detana Twin Bee Deluxe Pack
This series is one of the earlier "cute'em up" series.  Everything in these games is cute: the protagonist, the enemies, the power-ups, etc.  The games alternate from horizontal to vertical scrolling every other level. The first game, Detana Twinbee, is an earlier title, and it shows its age, but Twinbee Yahho is a much more complete game, with improvements all around.  In keeping with their light-hearted theme, they are not as brutally difficult as Gradius.

Dungeons and Dragons Collection
I never noticed these games in the arcade, but apparently they existed.  Tower of Doom and Shadow Over Mystara are scrolling beat'em ups, with player upgrade features as you continue to play. Lots of fun for fans of Knights of the Round and King of Dragons.  Of course, two-player co-op makes the experience better.

Sonic Jam
Many cite the lack of a true Sonic game as one of the reasons the Saturn failed.  Maybe so, but there were a bunch of subpar tangential efforts like Sonic-R, Sonic 3D blast, and Sonic Jam.  Sonic Jam is a compiling of Sonics 1, 2, 3, and Sonic and Knuckles.  There is a 3D hub world to roam around in as you pick which game to play, but it almost feels like it might have been for a proper 3D game that was scrapped.  There are some extras like advertisement materials, manuals, and other tidbits.  One notable feature is the ability to use the spin dash in Sonic 1, and 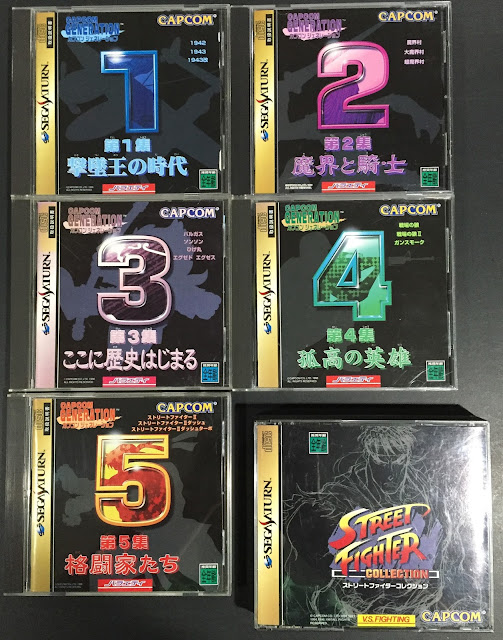 Capcom Generations 1 (194X series)
1942, 1943, and 1943 Kai are included in this seminal shooter pack. It was cool to play a version of 1942 other than the crappy NES version. Keep in mind these games are a product of their era, and some have aged better than others.  Despite their technical limitations

Capcom Generations 4 (Commando series)
Commando, Gun.Smoke, and Mercs.  Gun.Smoke is a bit of an oddball thematically, but the action is right at home.  There were a lot of early overhead run'n gun games, but Capcom seemed to get the action just right. Later games would surpass these, but for the early games, the action is great.

Thunder Force God Packs 1 and 2
Thunder Force is one of the first shooters you think of when you think of shooters on the Genesis. There were three installments for the Genesis, from II through IV, however IV was oddly renamed: Lightening Force: Quest For The Dark Star.  Why this was done nobody knows. The first collection contains TF2 and TF3, whereas the second collection brings TF AC and TF4.  TF AC was the arcade port of TF3, which did have some stage alterations.  Great collections for die hard Thunder Force fans or if you really want to play TF AC.

So this list is just another reason why I love the misunderstood Saturn.