Late to the TurboGrafx-16 Party (and relations to Saturn)


The TurboGrafx-16 has dramatically risen in popularity in recent years among retro game collectors. For whatever reason, it and its games command high prices in the secondary market and are rarely seen in stores.  As a kid, I didn't know anyone who had one, and was only vaguely aware of its existence.  In retrospect,  I recall seeing the commercials on T.V. and ads in comic books.  It just didn't seem real since I had never seen one.

I was really into the Sega Saturn years ago, specifically shoot'em ups.  Actually I still am, but I feel like I've mined the best of what's available and feel accomplished and satisfied with my collection (thank goodness, as collecting shooters for the Saturn is prohibitively expensive now). During my research on Saturn shooters, I invariably stumbled upon articles posts, and YouTube videos praising PC-Engine shooters.  As I investigated, I discovered the PC-Engine is the Japanese version of the TurboGrafx-16.  My interest was piqued.

There are a number of similarities between the Saturn and TurboGrafx-16.  Both were early consoles of their generation.  While not technically a true 16-but system, The Turbo was considered part of that generation (and besides, it was way more powerful than the 8-bit systems of the time).

The Saturn was the first true 32-bit system (let's leave the 32X out of this discussion).  After hearing about the specifications of the forthcoming Sony Playstation, Sega wanted to get a jump start with the Saturn and install a fan base.  In a surprise move, Sega moved the launch date up months from the fall to the spring. This backfired tremendously, as game developers were expecting more time to refine their games, and as a result many of the initial run of games were buggy and somewhat unfinished.

Both failed to grasp a wide audience in the United States. Just as with the Saturn, the American library of games pales in comparison to the Japanese library. Many feel that if more Japanese exclusives were released here, both systems would have had a better chance to succeed.  Many of the best Japanese games require no knowledge of the Japanese language in order to play them; in fact almost all title screens, text, and voice samples are in English!  This is frustrating to think of now, but one must consider the historical context in which these decisions were made. American business executives made decisions on what games they thought would be successful based on what market research was at the time. Hindsight is 20:20, I guess.

As I read and watched more and more about the PC-Engine shooters, I decided that this was a system for me.  I made the decision early on that it would be a PC-Engine and not a Turbo-Grafx-16, as shooters were my forte.  This was an easy decision.  PC-Engine games were cheaper, and more plentiful in the Global marketplace.  The Turbo default video output was the dreaded RF signal. Also, the PC-Engines just looked neat.  But trying to figure out just which version of a PC-Engine to get was arduous.  I don't think there is another console that is as varied and multi-faceted as this one. Keep in mind that this predates the Sega Genesis' CD attachment and 32X attachment.  There's the original PC-Engine, the Core Grafx, the Core Grafx II, the CD Rom, the Super CD Rom, The PC-Engine Duo R, the PC-Engine Duo RX, the Shuttle, the PC-Engine GT, the PC-Engine LT, the SuperGrafx, and the list goes on.

The PC-Engine was the first to have a CD-Rom attachment, and that expanded its library of games. The various versions of CD-Rom attachments required system cards that would be read in the card slot while the CD was read.  In addition, the CR-Rom attachments required an interface unit.  I became apparent that assembling this piece by piece was the wrong way.  One of the PC-Engine Duos was the way to go. After finally procuring a PC-Engine Duo R, I finally got to explore a whole new world of shooters, both on Hu-card and CD.

A couple of years ago I had my PC-Engine duo modded for component output by Shawn at http://www.tg16pcemods.com/services.html.  It was one of the best decisions I ever made as it looks insanely crisp on my Sony 32" Wega Trinitron.  I can't believe accepted composite as the best it was capable of.  Anyone who is in the market for one should very seriously consider getting it modded for either RGB or component.

With the surge in retro game interest, comes a surge in retro game prices.  The PC-Engine Games have been climbing to the point where some wonder just how long it can continue.  This is an opportune time to invest in a Turbo Everdrive, which is region-free.  This can play any games originally on Turbochips or Hucards, but not the CD based games. There was a great video about it on YouTube by Retro Gaming Quarterly, for more details I suggest watching it here.

So, in closing, I thought I'd just ramble on about my affinity for the PC-Engine and my journey to discover it.  If you're still reading this, thanks for making it this far. 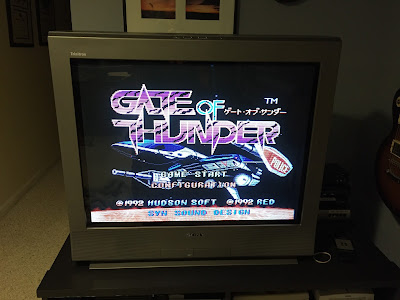 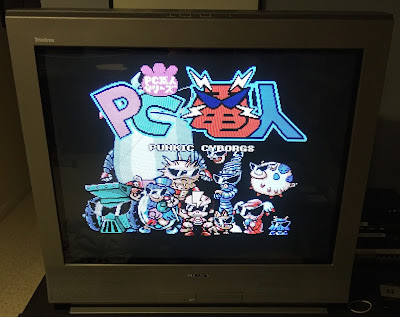 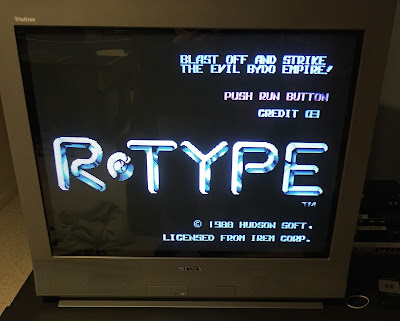