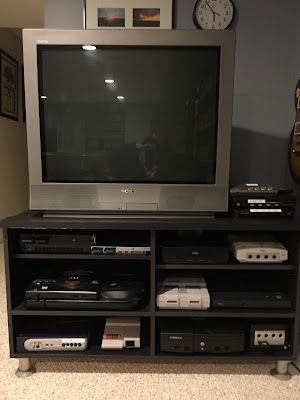 This is closely related to my earlier post regarding retro console hookups, but I wanted to tell the story of the consoles I own, and show my setup.  These are described in chronological order of my ownership, not necessarily release date.  So here goes...

The first console that I owned as a kid was the Nintendo Entertainment System (NES).  My birthday and Christmas are relatively close together, so I convinced my parents that this would be an one-and-done present for both occasions (a tactic that I learned would be quite useful over time).  My NES was the classic toaster design, and it came with two controllers and Super Mario Bros.  I played the heck out of that thing.  When we were stuck inside the house due to bad weather, this is what all the kids in my neighborhood would do.  We would have sleepovers and stay up late playing the classics, taking turns.  If we didn't beat a game and ran out of continues, we would start over from the beginning.  We were all addicted.  Don't get me wrong, we were active kids who loved playing sports in the street and at the park, but when we weren't doing those things we were playing nintendo.

As a kid, my only means of income were mowing the neighbor's lawns in the summer and shoveling their driveways in the winter.  Twice a year, when report cards were released my dad would give me money based on my grades: $5 for each A, and $3 for each B, or something like that.  This resulted in 2 or 3 games from my own money, and another 2 or 3 between my birthday and Christmas.  After about 3 years, I had nearly 20 games.  Unfortunately, I do not have my original NES anymore.  What I own now is a top-loader model that has been modded for RGB output for optimum picture clarity.  I have it hooked up through a scart-to-component converter box, into my 32" Sony Wega CRT, which is my main gaming television that all my retro consoles are connected to.


The second console that I owned was a Sega Genesis.  This came out when I was in 8th grade, and I remember being blown away by the 16-bit graphics and sound.  The first game I witnessed at a friend's house was The Revenge of Shinobi.  What an introduction!  The opening sequence was so life-like that whatever loyalties I had to my NES were cast aside as I pursued this next-gen console.  Being a kid, I was as fickle as the next.  I took my NES and games to Funcoland (remember them?) and traded them in for a new Genesis, which included Altered Beast AND a coupon for a free copy of Sonic the Hedgehog! My next game was The Revenge of Shinobi, and eventually I built up a modest collection through work and grades.

By this point I was in high school and I had grown to be die-hard Chicago Bears fan.  We played lawn football almost every day after school and John Madden Football or Tecmo Super Bowl when we got tired.  I would play as the Bears and create a fantasy world in which they would go 18-0, and were perennial Superbowl Champions.  Evidently, this was only possible in video games.
By the time I was a senior in high school, I really wasn't playing video games all that much anymore as I has picked up playing guitar instead.  I still brought my Genesis to college with me, where we would occasionally play said sports games.  At some point during my freshman year, my Genesis was stolen from my dorm room, and that was that.  The Genesis that I have now is a flea market find, but it is the same model-1 that I used to have.  The Sega-CD I bought from a game shop in Madison, which we frequent often.  I have them hooked up via scart-to-component as well.

I received a Sony Playstation during my senior year in college as a graduation present, but I no longer own that.  Once I bought a Playstation 2 (PS2), I gave my original Playstation to a friend as the backwards-compatibility made it obsolete.  The Playstation library of games was quite expansive, but I only owned a handful of games, like Metal Gear Solid, the Resident Evil series, Einhander, Bust-A-Move, and maybe a couple others.  I was playing Madden '99 more than anything.  This is the first time I had heard the term "shovelware", and its kinda appropriate for this library; there are lots of bad games out there.

The PS2 library of games is also ridiculously large, but I was still very picky.  Some of my favorites were Maximo, SSX Tricky, Metal Gear Series (again), Gradius V, Contra: Shattered Soldier, and others. Again, most of my playtime was dedicated to the Madden series.  My PS2 is hooked up via component.

When I bought a used Sega Saturn, my first game was the Japanese import shooter, Donpachi. Imports are easily played if you get an Action Replay cart (shown above). Initially, all of my saturn games were imports, as I was enthralled with shoot 'em ups, and there were virtually no domestic releases.  Ebay did well for me, as the prices for games were very reasonable before the retro gaming bubble hit.  If I started collecting these saturn imports today, there's no way I would have ever started as price are at least 3x as much as I paid for them.  It was with this console that I realized that there was such a thing as a retro gamer.  The Saturn is my favorite console (read my post on why), due to its massive library of 32-bit 2D awesomeness. I have it hooked up via scart to component.


I was a huge Contra fan, and I knew that there was one title on the Super Nintendo (SNES).  I found a SNES at a local Goodwill for under ten bucks, so I figured that was a sign.  Contra 3 The Alien Wars is a good enough reason to own the console.  I remembered the Donkey Kong Country games were fun, so I sought them out as well.  This is a fun little console that has a very diverse library; there's something there for everyone.  I remember back in high school how expensive the SNES games were compared to Genesis games, and that turned me away from even thinking about a SNES at the time. A couple of generations later, SNES games were found for a buck or two apiece.  Timing is everything, I guess. I have this hooked via scart to component.


In the same manner (and same Goodwill) that I found my SNES, I found a Gamecube.  I wasn't terribly interested in one, but I wasn't going to turn down a $10 Gamecube.  It's got a lot of fans, and is underrated for sure, but to me its ok.  I do like the Resident Evil Remakes and Metal Gear Solid the Twin Snakes. Unfortunately, I do not have component cables for the Gamecube as they are ridiculously expensive. I have it hooked up via S-video.

When I was collecting for the Saturn, I remember hearing about the Dreamcast, and how it had some titles that were akin to those on the Saturn. Years later, a friend was cleaning out his house readying it to be rented, and he offered me a bulk deal on the Dreamcast system and all his games. Being the thrifty gamer, I accepted the offer and now I have a dreamcast. As with the Saturn, the bulk of titles that I was interested in were imports.  A disc swap converter was purchased, and eventually I bought the 2 games that I cherish in my collection: Under Defeat and Zero Gunner 2. While I have an RGB scart cable for it, not all the games are compatible with that video standard and they just refuse to load. Namely Giga Wing and Street Fighter Alpha 3.  Sigh.  S-video it is. 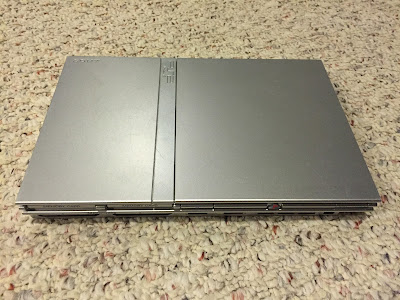 It was around this time that I heard that Thunder Force 6 existed...in Japan.  It was released for the PS2.  The PS2 is not an import-friendly system.  There are ways to play games of a different region, but they require a special boot disc and finagling the  disc tray with a tool to force it open.  I wasn't interested in messing around too much with the console to rig it to play games.  Then I read about Gradius Gaiden for the PS1, and Raiden DX, and other shooters released in Japan.  Hence I sought out a Japanese Playstation 2 on eBay.


At this point my focus in retro gaming was squarely on shoot 'em ups.  I know that the NEC PC-Engine is held in very high regard for this genre, and with good reason.  There are a plethora of titles across the Hu card format and super CD.  I researched this system for a long time, and it took me a while to wrap my head around exactly what this was and how it was configured.  The PC-Engine is the Japanese version of the Turbo-Grafx-16, as it was known here in the states.  While the Turbo was struggling in the U.S., it was doing pretty well overseas.  It was second only to Nintendo's Famicom (NES).

It was the first console to have a CD-rom attachment, which was pretty expensive for the time as the technology was relatively new.  Later NEC would release a combined CD-Rom and PC-Engine appropriately named the PC-Engine Duo.  Despite the advances made with the console, the best it could natively output was composite video.  I had mine modded for output component video by Shaun at http://www.tg16pcemods.com


The last console that I acquired was an original Xbox. I have no interest in this system for its native releases.  The only reason I was interested in this was for the Coin Ops app mod.  This mod allows one to play nearly every arcade game ever released, albeit with an Xbox controller.  There are arcade sticks out there for the Xbox, but I haven't gotten around to them.

As for the unit holding everything, I don't know what brand the T.V. stand is.  You can't really find tv stands for CRTs anymore, unless you look at the secondary market.  This stand had exactly what I was looking for: it was strong (T.V. weighs 230 pounds!), had lots of space for consoles, and was relatively compact.  Prior to owning this stand, I was swapping consoles in and out.  It helps to have backwards compatible consoles (PS2, Genesis w/Power Base Converter) and region mods (both the Genesis and SNES required a little filing or tab pulling, and the NES has a Famicom-to-NES converter cart, the Dreamcast has the region-free bios, and Saturn has Action Replay) to reduce the number of consoles needed.

Well, those are my retro consoles.  I also own a PS3 and Wii, but they're hooked up to the new tv, and honestly I don't really play them that much.  Thanks for reading and have a good one.