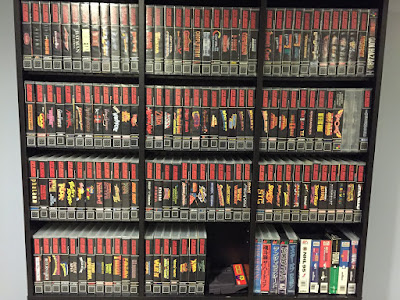 After collecting retro games for so many years, there comes a point where one needs have a plan for the collection.  What usually starts out as shelf or two can grow into a messy pile-up with unorganized carts of various systems.  Nintendo carts mingle with genesis carts, leaning on super nintendo carts, stacked into tenuous towers, in denial of the inevitable collapse of such a frictionless arrangement.  You know what I mean; when you don't have a full shelf of one type of cartridge, and the ones at the end slip and slide across the laminate of the bookshelf.

Being somewhat of a semi-perfectionist,  I want my collection to be tidy and uniform.  The vast majority of my cartridge games were purchased loose and unprotected.  This doesn't bother some people, but it bothers me.  Also, I would like to preserve the games as they are only getting older.  Especially the metal contacts, which are prone to oxidation (rusting) if left out and exposed.  It took me a while to decide how I wanted to organize the collection.  I knew I wanted some kind of individual case for each game, and something where I could identify the game from the spine of the case, like a book or dvd.


After much researching, I decided on universal game cases (UGC's).  These clear plastic cases open like video rental cases from decades ago, and have strategically placed tabs to accommodate the varying dimensions of most cartridge retro games. These would tidy the genesis and snes carts, and align them in rectangular unison, ending the console wars in my basement.

The  UGC's have a transparent sleeve for inserting reprinted covers.  This to me was a major selling point. To be able to present the games with the images of the original packaging is part of the appeal for such an undertaking.  As a kid, I remember staring at these images from across the glass counter, trying to imagine what the game was like based purely on some artist's interpretation.  Websites like the www.thecoverproject.net have user-generated scans for nearly every game with a commercial release.  After downloading, printing, trimming and inserting, the effort goes a long way towards presenting a collection as something to showcase.

However, the choice to go with UGC's was a difficult one for one reason:  the UGC's do not accommodate NES carts.  Well, not initially.  Those aforementioned tabs that hold games in place in the case prevent NES carts from fitting.  I have seen demonstrations of people online using tools to remove these tabs, but the results vary and just it seems to be an unideal situation.  That's a lot of work that goes into modifying each case, and when you have one hundred plus, that's a lot of extra labor. 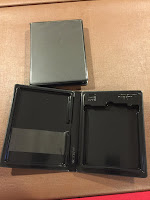 Eventually, I found some premium NES cases from www.stonagegamer.com called Bit Boxes.  These are a higher build quality than UGCs, and the price reflects that.  These cases are air-tight, so the likelihood of pin corrosion is reduced (you should still clean them if dirty).  These are black instead of transparent, a bit taller, and also have a clear sleeve for cover printing.  Due to the different size, the cover images need to be different sizes as well, so their website offers Coverproject images at Bit Box dimensions.  You can buy the covers from them or download and print your own.  I am a little bothered that I had to go with different cases for one system, but at least they are neatly presented and uniform among its own.

Both of these types of cases are more closely sized to dvds than books, so a better way to store them (in terms of space efficiency) is to find media shelves, not bookshelves.  I use the Atlantic Oskar Multimedia Storage Rack.  It has adjustable shelves, looks nice, and is a perfect size for cds, UGCs and dvds.  It holds a lot for its size, and had almost no wasted space in front of the games or above (if you position the pegs correctly).  The Bit Boxes hang out about half an inch, so for those I use a different dvd rack. 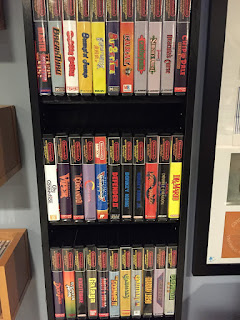 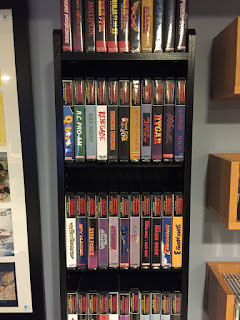 Even after the covers are printed and inserted, the decisions on how to organize these games can take many directions.  For example, Genesis covers have several formats and colors for their boxes.  The early version are black with a grid-like pattern.  Later the size of the Genesis logo changed.  Then they became red boxes.  To make matters worse, many third party developers did not follow the format and just had any image wrapped around the case.  I played around with keeping a series of games together, but that change in color of the cases midway through the series irked me (Sonic, Shinobi, Phantasy Star, to name a few).  I tried to keep them by publisher (Ea, Konami, Capcom, Rennovation), but I didn't seem to have enough of each for it to make sense.  Here is where you do whatever makes sense to you, and I opted for uniform colors on the spine.

Being a gamer before a collector, I always opt for value over complete in box.  Obviously these games are old, and their original packaging and boxes are a rarity, to say the least.  Especially Nintendo products, which used cardboard boxes, buying older games  drives the price up significantly.  Also, it is highly unlikely that you will find boxes for all the games that you want.  This to me is an unsustainable endeavor, so that is why I sought out an alternative way to store my collection.  Some people want complete games with boxes and instructions and that's fine, but to me, that approach has no endgame and will frustrate my need for uniformity.

I suppose dressing up the collection in this way has become a sub-hobby in and of itself.  It is not for the faint of heart, and takes a lot of planning and execution, but the payoff is the presentation of your collection in a neat, attractive, and archival fashion. 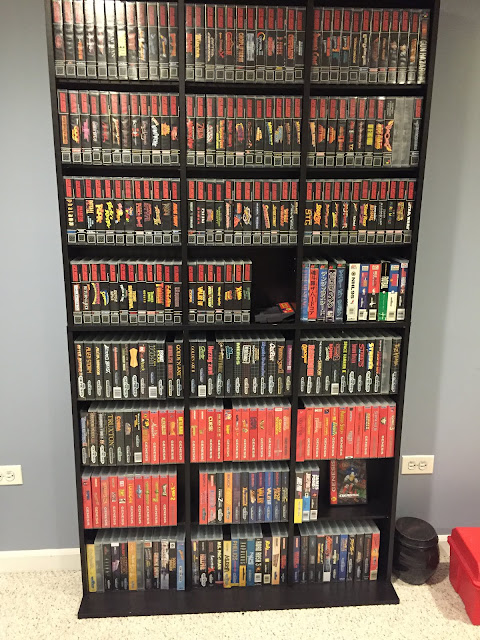