The State of My Retro Game Collecting

There's a saying that your life changes when you have kids, and that's no lie. All for the better of course,  and one side effect of that is you truly become a home-body. After the kids go to bed in the early evening, you're homebound looking for something to do. My wife reads a lot, and that's a great for her, but it's not the first thing I chose to do with free time.

When you only have enough free time for Contra, but not Breath of the Wild, you tend to prefer pick-up-and-play games.  I realized that I favored pick-up-and-play action games, as they are engaging throughout the usual 60 minutes and have a short learning curve. Shoot 'em ups, or shooters (not to be confused with first person shooters like Call of Duty, etc) emerged to the front of my mind when selecting games to play, followed by beat 'em ups (like Streets of Rage, Final Fight), and run 'n guns (Contra, Metal Slug).

So I started actively seeking out old cartridges at garage sales, flea markets, thrift stores, and eBay. Having a goal made garage sale hunting an adventure. Having lived through the 16 bit console wars, the memories were still palpable. My first task was to reacquire the games I had when I was growing up. This meant Nintendo Entertainment System (NES) and Sega Genesis games. This didn't take long, as I only had about twenty games total. Games from garage sales were dirt cheap, and so I was buying up games that I never heard of. As a kid I never would have dreamed of owning as many games as I have today. Back in the 80's, games were too expensive to be everyday purchase, they were primarily birthday and Christmas gifts due to their cost. $50 in 1988 is like a $150 today. There was lots of trading and borrowing between friends. I remember picking up odd jobs around the house and neighborhood, mowing lawns, shoveling snow, and so on. Two months of summer work could net one expensive game or two cheaper games. I remember Contra was $50, and it was a proud day when I took my lawn money to the Toys 'R Us and received that silver box from "the cage". I have several memories like this, and it goes to show the lengths kids would go to get more games. We treasured each one, and played the hell out of each one. Even bad games weren't "bad", because we had such a smaller range of experiences to compare, and if it was one of the ten games you owned, you still played it out of principle.

Recollecting my old NES and Genesis games were a gateway to the other consoles that I didn't have but always wanted. The Super Nintendo was next on my list, and not having any specific games in mind, I sought advice from YouTube. Acquiring common games in the wild wasn't too difficult, and I was able to buy the rest of what I wanted from eBay relatively cheaply. I must have been on the forefront of the retro gaming resurgence, because I noticed that game prices started creeping up; slowly at first, then faster. The popular games were the easiest to find, like Super Mario World and Donkey Kong Country. Those usually sold for a few bucks a piece. When games fell in that $10 range, I had to stop and think about it. I remember the most I paid for a SNES game: I was debating on whether $20 was too much to pay for the superb Space Megaforce, which now sells for hundreds of dollars. I'm glad I went for it. 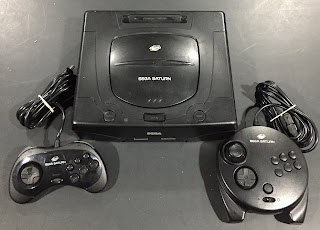 Next I discovered the Sega Saturn, and the 2D treasure trove that it hosted. This console was a different animal altogether. The domestic Saturn library, while revered with role playing games and 3D platformers, had a very paltry shmup library, consisting of the excellent Darius Gaiden and Gallactic Attack. It turns out that there was an enormous glut of shooters available only in Japan. Even though the Saturn is region locked, that is very easy to overcome with an Action Replay card that you slide into the cartridge slot (which teases Genesis backwards compatibility). With eBay and the online international marketplace circa 2009, games were easily imported, the only caveat being the lengthy shipping time. At the time, prices were a fraction of what they are now, but still a level up from collecting loose carts from thrift stores. This was my next collection goal: Sega Saturn shooters. While over a decade I was unable to get all of them, I can say that I have nearly all of the ones that I want. As of today, there is one title that I'm OK not seeking out, based on its inflated price: Image Fight/X-Multiply.

Playing shooters on the 32-bit Saturn led to interest in the Playstation. Despite it being wildly successful with its mass appeal, due to 3D hit games like Crash Bandicoot, Tomb Raider, Gran Turismo, and others, it still had a formidable collection of shooters. As with the Saturn, the best games were imports.

The other console that I took a deep dive into was the PC Engine, AKA Turbo Grafx-16 in North America. It was primarily known for its expansive shooter library, and similar to the Saturn, most of the offerings were Japanese exclusives. It is a near consensus that the PC Engine reigns as THE system for shooters, and its hard to argue against that. Just do a little digging, and it will become apparent.

Trying to figure out which version of the console to buy was a confusing experience. There are too many variants, add-ons, RAM cards, and such that you need to commit to how it all works or you will end up making multiple purchases. I'm not going to explain this all here, but I will say that the easiest way to start playing the PC-Engine is with the Duo console, which can play CD-rom games as well as the standard Hu card games, which are about the same size as a credit card. Because most of the shooters were imports, I went with the Japanese version of the Duo. The PC Engine was very popular in Japan, so there was a much larger supply of games in circulation, lowering the game prices. Playing imports was no issue when you have a Japanese console. Of course, shooters have little to no language barrier. This was my last and current collection goal, to get all of the shooters for the system. Sadly, as with the Saturn and retro games in general, the hobby has caught fire and the demand for games has driven game prices into the stratosphere.  To anyone interested getting started in the hobby today, I think a flashcart like the Everdrive, which allows games to be played from an SD card, is a must. The high game prices in today's market make starting a collection prohitive. The issue of piracy is a touchy one, and people have as many opinions on it as there are wrestling games on the N64. Some abhor piracy outright, some have no qualms about downloading roms, and most are in the middle. My feeling is that if a game is unavailable to purchase through licensed channels, and it is ridiculously expensive, I have no problem downloading it. If a game is made available, I will purchase it to support the developers and increase the likelihood of more games being produced.  If I own a physical copy of the game, I don't have a problem with having the rom on a flashcart. Legal grey area aside, flash carts are in my opinion, the crowning achievement in retro gaming tech today.

I have dabbled in other consoles, but the bulk of my attention goes towards the aforementioned consoles. With all of the advances in graphics and gameplay, I still prefer the simplistic, 2D action games. There has been a resurgence of shmups on modern consoles lately, like the Psikyo Shooting collection, Darius Collection, Ikaruga, and others. These are great for introducing younger generations to the genre, and for older gamers to play these affordably. More options is always a good thing. I know that nearly everything can be emulated these days, but to me its not the same. Emulation is useful at times, but it's not how I prefer to play, the experience is just different when not using original hardware. The emergence of third party console manufacturers has been a boon to the interest in the hobby. Newer tech like field programmable gate arrays (FPGA) combine the lagless experience of hardware with the modern amenities like high definition video output. As much as I love my original model 1 Genesis, the jail bars and finicky cartridge slot have relegated it to the storage bin in favor of Analogue's Mega SG; it's that good.

So today I find myself more focused than ever as a gamer, I just know what I like now. I have taken a hard look at all of the games I have amassed over the last 10 years, and have started purging the games that I know I'll never play. For example, I know that I'm not into RPGs, so those can go. With the advent of GC Loader, I can let go of Gamecube games that I have lukewarm feelings for. I'm recycling the sales into the last few remaining shooters on my list that I still want. The collection has never felt tighter, more curated, with less filler. I feel a renewed vigor, knowing that each game that I kept I have done so for a reason. A recurring question that I periodically ask myself is, "will I really play that?". If I answer no, and have another way to play that game, I'm for purging it. There is the added beauty of an organized, presentable collection that is always present in the back of my mind that acts as a check against hoarding.

For those of you who have been in the hobby for years, have you changed your collecting habits? Has your collection expanded only to contract again? It is always so interesting to me to see what others value in their collections.