The Super Nintendo is considered by many to be the best 16-bit system.  When compared to its main competitor, it had a lot of advantages: and expanded color palate, a more sophisticated sound chip, and lots of third party support.  It is known for its plethora titles of the main game genres (RPGs, platformers, fighting games, adventure games, puzzles games, etc.), except for shooters.  The processor speed of the SNES did not match up well against the Genesis' processor, and thus fast paced action games like shooters were not its forte.  Clever programming will overcome limitations, and every system has instances where this is on display.  These are the games that I consider the very best of the genre on the system. If I left your favorite out, its because I don't have it or it just did not make my list. So, here goes. 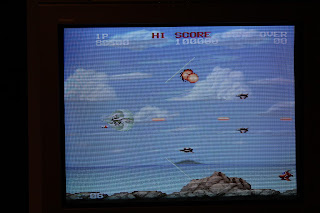 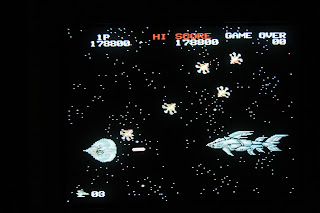 Leading off at #10, Darius Twin is definitely a Darius game.  Full of fish, staggered power ups, level choice, and more fish, this game has everything that you would expect a 16-bit Darius game to have. There aren't as many levels available as in most Darius games, but you still can make choices and that adds to replay value.  It's pretty early in the series, so there are some rough graphics and just ok music, but gameplay is king and this game score pretty well.  The music is interesting at times.  Its not the hardest game out there, but that is refreshing for a Darius game. 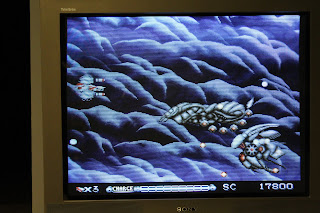 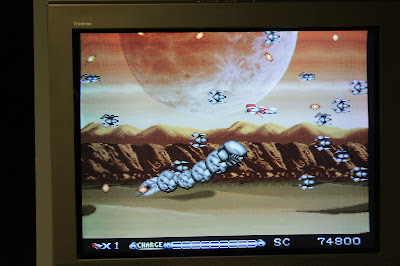 The first time I played this game I nearly turned it off due to the cheesy, early '90's dance music that was actually licensed from the artist 2 Unlimited.  I know that upbeat music is integral to the shooter experience, but this music sounds like its straight from the Saturday Night Live skit "Night at the Roxbury".  After getting past the initial cheesiness, there is actually solid gameplay here.  There are secondary weapons to be picked up, all of the usual fare, and there is the shield mechanic, which is unique.  Blue orbs circle your ship, absorbing bullets for you.  It can also be expanded, circling in a wider radius for offensive purposes, and even shot out like a boomerang.  It slowly depletes in power as it is used, and that adds an element of strategy as you can turn it off so that it can charge and be fully powered up when you really need it.  Mastering use of this will allow you to progress further in the game as there can be a lot of bullets in the screen, and you can't dodge them all.  Also, the H.R. Giger inspired visuals are well drawn and very reminiscent of the Alien movies, a welcome addition. 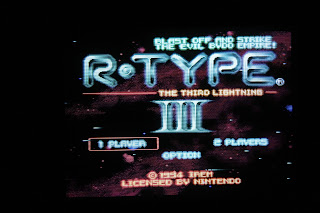 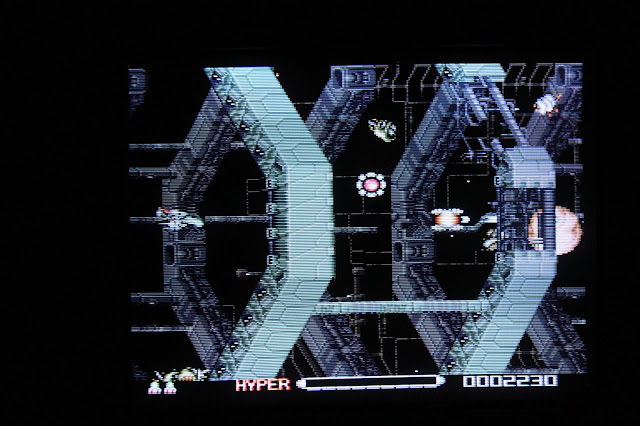 Following up Super T-Type, this game ups the ante with refined, crisp graphics, amped up music, and choice of three force balls at the start.  The force ball operates as before, but with a new hyper option.   When selected, the fully powered up beam blasts a spread shot, and your normal fire is super strong for about ten seconds or so.  After than it overheats and reverts to normal shot.  An nice addition to add a layer of strategy.  The one thing I don't like is starting at checkpoints when you die, but that's par for the series.  At least this time around you don't feel underpowered for too long. 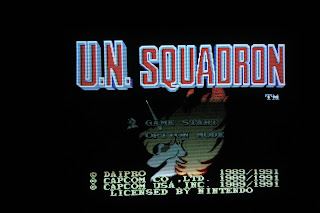 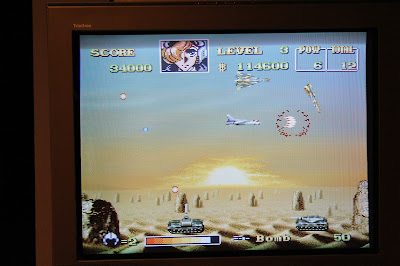 A clever horizontal shooter with some rpg elements to it, U.N. Squadron if an addictive game.  At the start you choose from three pilots: the fast one with high firepower but weak defense, the slow but sturdy one, and the well-rounded one.  Points are used as currency between stages to purchase new weapons or a new plane.  Each plane that you obtain can be leveled up with experience, and its attributes increase accordingly.  The sprites are realistically drawn, and even though they can be smaller, the on-screen action gets intense as enemy movements seem grounded in realism, for the most part.  Enemies are both airborne and ground based, so you have to bomb, fly, and shoot.  If you neglect the ground forces the sky will fill up with missiles, making maneuvering difficult.  This game is a ton of fun, and one that you have a hard time putting down. 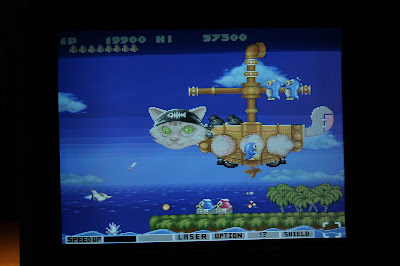 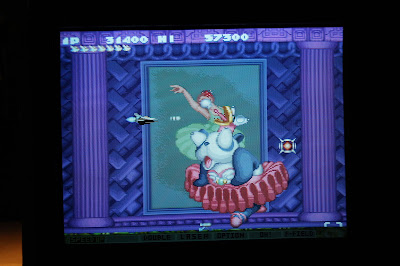 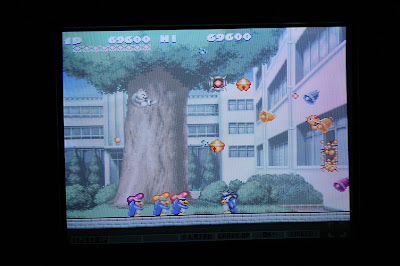 Parodius, a hybrid of the words parody and Gradius, is a tounge-in-cheek interpretation of the norizontal shooter game genre, molded by Konami gameplay elements.  There were three installments released for the Super Famicom:  Parodius Da! (From Myth to Laughter), Gokujo Parodius (Fantastic Journey), and Jikkyo Oshaberi Parodius (Chatting Parodius Live).
Everything about these games are wacky: the selectable characters, enemy designs, the weapons, the stage designs, the music and sound effects, and the bosses.  There are a variety of ships/animals/beings to choose from, each with a personalized set of weaponry.
The only thing from completely making light of the Gradius series is the resident difficulty.  One would think that such a light hearted theme would allow for some ease of gameplay, but make no mistake, these games are Gradius games at heart.  Still lots of fun, though you may want to slide the difficulty down if you want to see all of the stages. 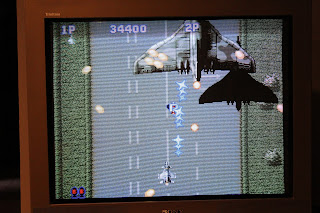 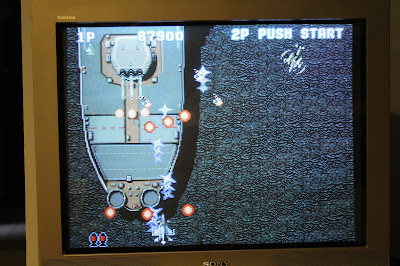 This game is known in SNES circles as being one of the rarest titles for the system.  Its a shame, because it is a solid shooter, and fans of the Strikers 1945 series may find the game uncannily familiar.  You can choose from four different pilots/planes, each representing a different nationality. The main difference is the firepower/type, each can be powered up as you collect icons.  Special attacks are unique to each plane, and more can be picked up.  While there aren't too many frills or special effects in this game, its just a satisfying straight forward, balanced shooter that is fun to play time and time again.  Another odd feature is the sprite visuals you are presented with if you complete the game: the harder the setting that you complete, the less clothing your character is wearing.  How's that for creepy motivation?  Still a solid game, though. 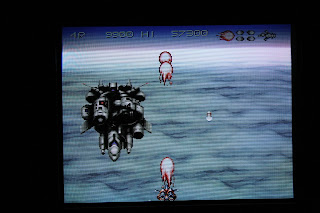 This game is a a graphical masterpiece, as it boasts large, beautiful sprites that fill the screen.  Mode 7 is in full effect here as is is used to give the appearance of depth to the backgrounds, which scroll quite nicely.  The stages alternate from vertical to horizontal, giving more variety to the visual effects as well as gameplay.  You have the ability to switch between three weapons at the start, and you will need to do so as certain weapons match certain situations; the fun part is figuring out which ones to use when.  If you get hit, you loose that weapon that was armed, and if you get hit three times you are left with a token pea shooter.  When you die you respawn on the spot. The music is great, if fits the action well.  A great entry, and often cited as the best shooter on the system. 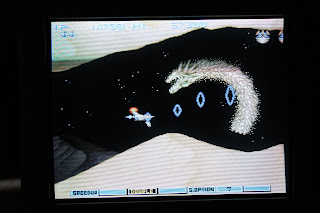 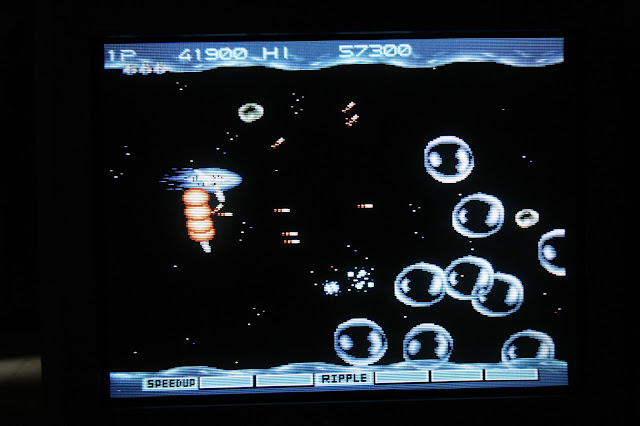 As a launch title for the SNES, this game as aged pretty well.  It took what was great about the original Gradius, enhanced it with 16 bit capabilities, and an instant classic is made.  It plays just how you expect a Gradius game to play, including the trademark slowdown.  This bothers a lot of people, but I find myself thankful for it as I need all the help I can get.  Your weapon select progression can be chosen and/or customized, allowing you to reorder the power ups, which adds to replay value.  Thankfully, the Konami code is present, although it is slightly altered.  Instead of entering the code in the traditional manner when paused (this will cause your ship to self-destruct), press the L and R shoulder buttons instead of left and right. 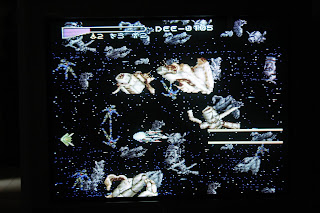 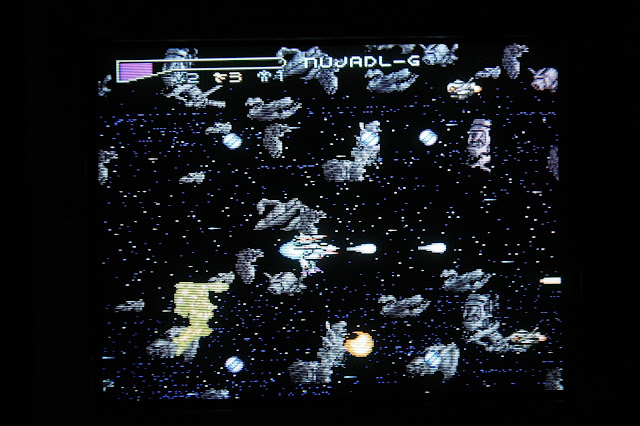 I grew up a Robotech fan, and I played the disappointing Macross for the Famicom with a cart adapter to play on the NES.  My next console after the NES was a Genesis, and I actually never owned a SNES as a kid.  It wasn't until five years ago when I heard about this game and bought it on eBay.  It seems like it took forever to get here, as do most games from Japan, but when it did, boy did it live up to the hype.  It made up for that crappy NES offering and then some.  One thing that makes this game awesome is the gameplay variety.  You can choose between Hikaru (Rick), Max, or Milia (Myria).   Each of which has their own customized Valkyrie with different firepower.  Of course you can switch between jet, gerwalk, and battloid at any time, as the stages require different strategies at different points.  Each mode can be powered up individually, depending on which form you're in when you pick up the icon.  What's more, if you don't fire for a few seconds, you activate the "Minmei Cannon", which allows you to capture enemies and they will fight alongside you.  That is badass. 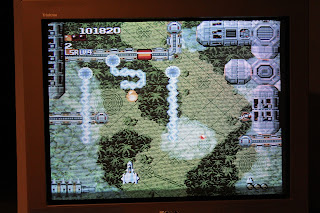 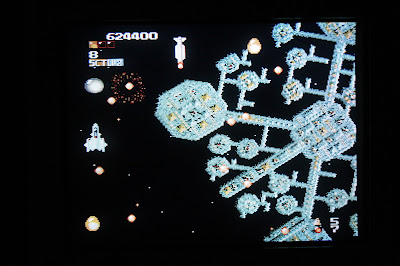 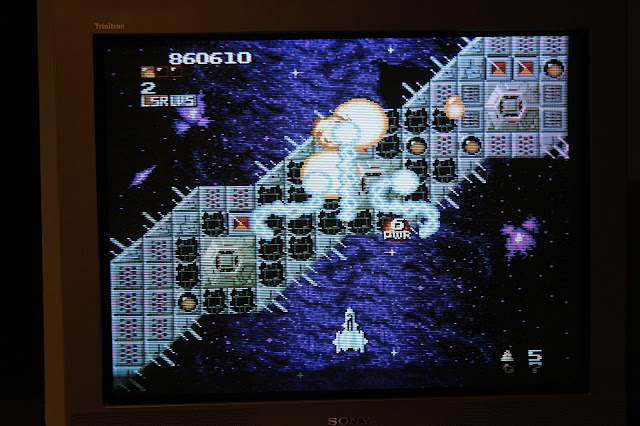 This may be an obvious choice, but that would make sense, wouldn't it?  Admittedly, I have a slight bias for vertical strolling shooters, but on a different day, its possible that any of these top five could be number 1. Space Megaforce is a showpiece for the SNES.  All the features are here:  variety of weapons (both traditional and creative), the smooth movement, screen clearing bombs, the tough but fair challenge, dynamic backgrounds (even some mode 7!); all of these combined culminate in a uniquely addicting masterpiece.  For me, the weaponry is the most appealing part of the game.  There are eight different weapons available, each upgradeable.  In addition, the mode of fire can be changed for each weapon by pressing R.  For instance, weapon 1, the multiple shot, can shoot in multiple directions four different ways!  This kind of attention to detail makes for lots of replay value.  The Challenge definitely ramps up as the stages progress, but it does so gradually.  There are also additional difficulty settings for the hardcore shooter fanatics.