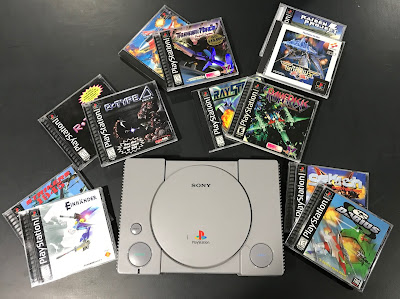 The Sony Playstation was the hands-down winner of the 5th generation console wars between the Sega Saturn and N64. Objectively, based on sales, there was no comparison. It wasn't my favorite console of that generation, but it had a great library nonetheless. I have written several posts on the robust Saturn shoot'em ups library, and now its time to recognize the PS1 for its wares. There were several cross-platform entries, but that's OK. Several of these are Japanese exclusives, but they can be played with other means today. 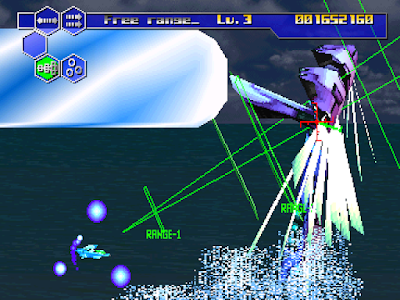 The Thunder Force series cut its teeth on the Genesis/Mega Drive, and the jump to 3D was inevitable for this platform. The action is still primarily side scrolling, with polygons in lieu of sprites. I find the visuals to be a step back, as the sprite work in the previous entries was so good in comparison to chunky polygonal shapes. Aside from the newer visuals, the gameplay is largely the same. Some of the typical weapons remain, but a new entry is the game-wrecking Free Range weapon. It's a little hard to use at first, but master it and you can take down bosses in no time. This was originally released for the Saturn. 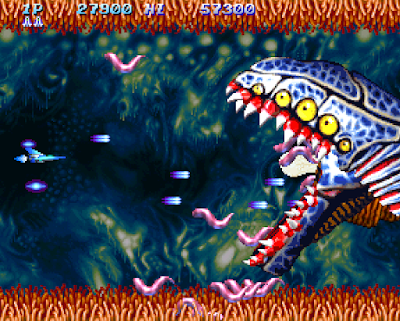 This collection features Salamander, Life Force, and Slamander 2. Life Force and Samander are essentially the same game, except that Life Force adopts the collected-power-capsule method of weapon upgrading, like Gradius. Both Salamander games were unreleased stateside. The real treat here is Salamander 2. The graphics and stage design take another step forward in the series, and it is one of the most enjoyable games to play in the Gradius-Salamander lineage. 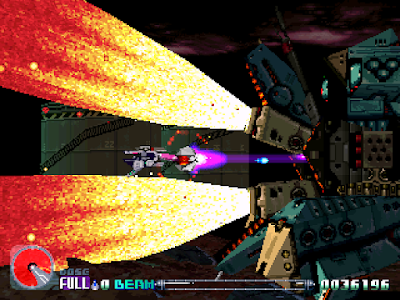 The fourth installment in the series also takes the leap into 3D. While most early 3D visuals don't age well, I find these more palatable than those in Thunder Force V. The gameplay is definitely R-Type, with newer features like adjustable speed, and a charge up system for the force pod. It is not as punishing as the previous entries, but still its not easy. It is a nice refinement of the series. 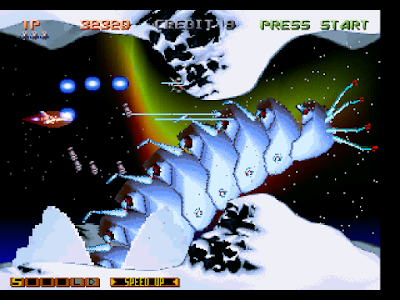 By this point in time, the Gradius franchise is well established, and the gameplay is fairly predictable to those who follow the series. What makes this game stand out is the beautiful attention to detail in visuals. The stage design, enemies, and bosses all were lovingly designed, as if to make a statement with the first entry in the the 32-bit generation. Being a gradius game, it is just as difficult as you would expect it to be, but you will enjoy every death as the game is much more appealing to look at. 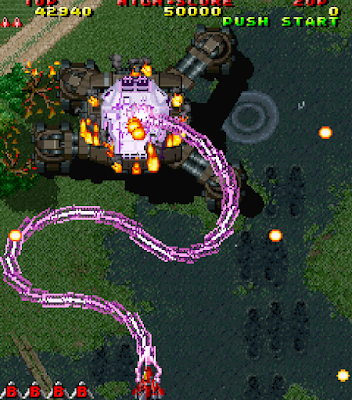 This is a collection of arcade versions of Raiden 1 and Raiden 2. Both ports are nearly perfect, with the addition of customizable button configurations and difficulty. This is a great choice for beginners due to that last feature. Having both games is a treat as well, since the first is a classic and the second improves upon the gameplay by adding a new weapon type, the purple toothpast laser, and a new scatter bomb. Just as you would expect, it is twice as fun with a second player. I had a hard time deciding between this and the Japan-only follow up, Daiden DX. Raiden Project just edged it out due to it having both games. 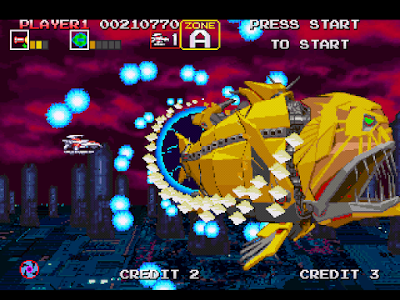 Darius games up this point were just average. The previous entries were OK, good enough for some casual play, but not really cracking anyone's lists of the best shooters. Darius Gaiden is in my opinion, the first Darius game to garner such attention. The screen bursts with color; this is the most visually appealing game in the series. The music is some really strange space opera on acid, as if alien fish teenagers were congregating at a rave near the edge of the universe, flailing glowsticks all about. The bosses are bigger than ever, and their demise is followed by a blinding screen flash. The outlandish screen sucking bomb is immensely satisfying to drop, and I regret every time I die not dropping them sooner. The difficult curve is appropriate, and you won't mind playing it over and over again as it is that funky. 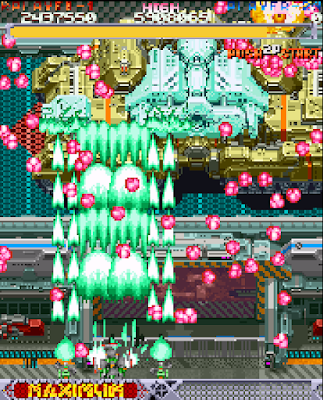 Donpachi, one of the first games produced by developer Cave, made the blueprint for how to make a bullet-hell shoot'em up. The different firing styles add a now-taken-for-granted gameplay strategy of alternating between concentrated fire and weaker, wide shots. Many people play games like these for high scores or one-credit clears (1cc), but I'm content to just play and enjoy the game as it comes. I haven't 1cc'd any shooter, and probably won't anytime soon, but I appreciate these all the same. 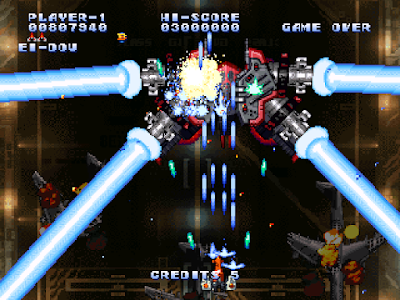 One of the few Playstation appearances from Raizing, the developer that produced the excellent Battle Garegga for Saturn. This game makes use of a secondary plane attack, as in, being able to target enemies in the background and fire at them with homing lasers before they come to the fore front and pose a threat. The standard weapon is fine, but the real fun is trying to string together as many targeted background enemies as possible. I champion this series at every opportunity. To me, it is a near perfect shooter for all levels. The adjustable difficulty allows players to learn at their own pace. The variety of planes, each with their own attack patterns, charge shots, and bomb attacks adds a lot to replay value. The control is tight with the perfect amount of speed and maneuverability. Lots of color, realistic sprite design, imaginative bosses, and fine tuned amount of chaos make for one of my favorites. The two-player co-op adds tremendously to the fun factor. Parts 1 and 2 were released in Japan, whereas only part 2 was released in North America, but it was titled as "Strikers 1945" despite being the sequel. 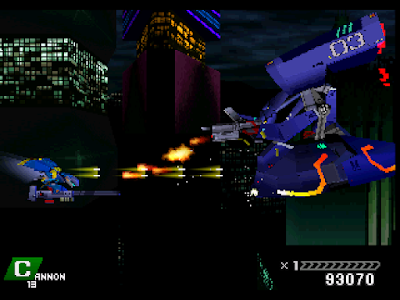 The most intriguing entry on this list is also Squaresoft's only foray into shoot'em ups. The developer that is renowned for RPGs tried its hand in the genre, and hit it out of the park. Clearly inspired by Blade Runner, the dark visuals, futuristic vibe, and rock'n techno music all contribute to a moody, serious, and challenging game. Its visuals are are 2.5D, with polygons instead of sprites, but 2D side-scrolling. This can be good or bad, and I think this is best case scenario for early polygons.
Bosses are all oversized technical monstrosities, many of which transform and are dismantled piece by piece, making for satisfying battles. The primary mechanic in the game is controlling the weapon arm. Certain enemies carry weapons that can be captured after their demise. These weapons act as a secondary weapon, but in most cases are more powerful/useful than your main weapon, this is probably intended. Why Squaresoft did not follow it up is a mystery to me, perhaps they wanted to have a perfect track record for the genre, maybe the team that made the game got fired, who knows? I I think its one of the best in the genre, and even one of the best games on the console.

I do have issues with Sony's attempt at a d-pad, and find it sub-par. When I play any kind of 2-D game on PS1 I use the Sega Logistical Services Saturn pad, made for PS1. I also pull out the arcade stick here and there, but the Saturn pad is my controller of choice. 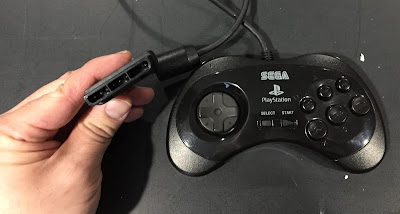 So these were my top ten PS1 shoot'em ups. There are lots, and I'll probably make a follow up post on the next ten sometime in the future. Let me know your top ten!