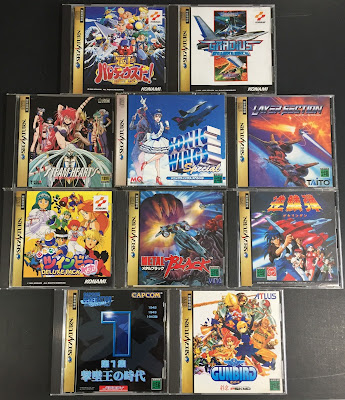 Ok, so here is my third list of shoot'em ups for the Sega Saturn. Normally, a third list on the same genre for one console would be unnecessary and would seem to be reaching, but this is a testament to the profound riches available on the Saturn (for the Japanese library). Here is what I consider my "third" tier of titles for this genre on the Saturn. Do not interpret "third" tier as not being any good; they are still good, they just didn't make my first two lists. Click here for part one and here for part two. These are not in any particular order. 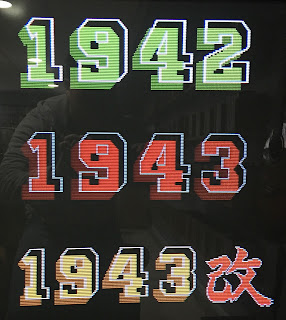 Capcom Generation 1 (194X series)
It has been said many times, but I reiterate here what an awkward position Capcom has taken with the 194X series. I am referring to the fact that the protagonist is fighting the Japanese empire during WWII. Imagine if you were a programmer here, and you were creating a game where you are invading the U.S. Apparently they weren't too bothered, as there were sequels. This collection offers arcade-perfect ports of 1942, 1943, and 1943 Kai. Whichever version is your favorite of the series, each one offers solid gameplay and control, if a bit vanilla. These were early entries, so the lack of many now-standard shooter conventions may be forgiven. Rapid fire is a welcome addition on the Saturn controller. My only complaint is that 1941 should have been included. 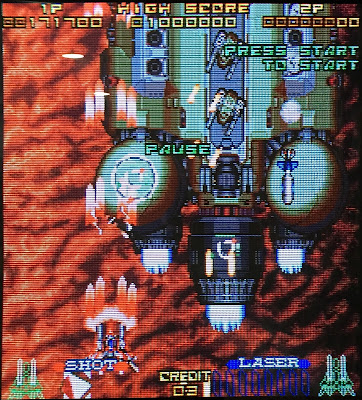 Layer Section
Also known as Galactic Attack in the west, Layer Section is one of the few notable shooters that was released in the U.S., along with Darius Gaiden. It is also the cheapest option on this list, and perhaps out of all of these lists. Don't be fooled by its budget-friendly price tag, this game stands toe to toe with many of its higher priced brethren. The gameplay divides your attention between two planes. Your regular laser shoots forwards, while your lock-on laser homes in on targets on the lower plane. The longer you hold on the lock-on button, the more enemies you target, and more points are scored. This is not the first game to employ this mechanic, but may be one of the best to utilize it. This lock on aspect is so well done, it is very adictive. You may focus so much on this method of attack that you may forget to pay attention whats in front of you. The graphic design and music are top notch, and you'll lose hours before you know it. 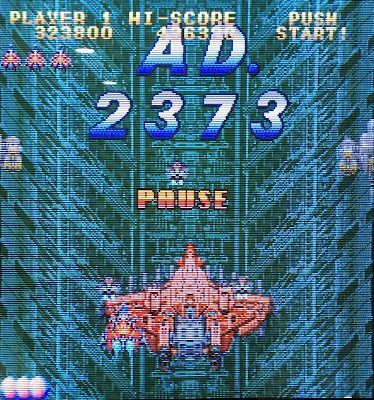 Gekirinden
Time travel is a backdrop to this unique shooter, as each stage has you warping to different eras and settings. This is the most unique aspect of this game, as all of the enemies on each stage are era-specific, and thus not repeated. The gameplay is average, if solid. There is some choppy background scaling, but the visuals improve as you progress. The three selectable characters all have different firing patterns, as expected. The music is surprisingly good; very reminiscent of Soukyugurentai. An interesting game in theme, but not much more. Worth playing for sure, just a notch above the average. 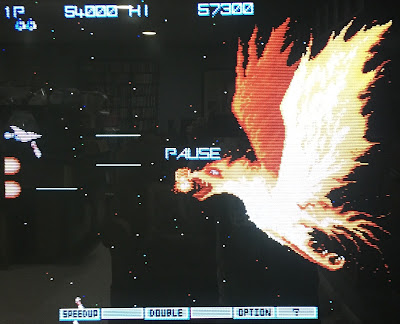 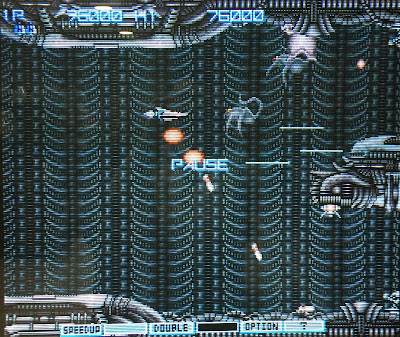 Gradius Deluxe Pack
Arcade perfect ports of the two Gradius entries are what you get here. Contrary to American beliefs, Life Force was not the sequel to Gradius. The actual sequel was not released in here in the states. Its a shame, because Gradius II improves upon the first in style and substance. There is now a selectable weapon loadout, for variety. The graphics have improved and some even take on H.R. Giger-inspired designs (a little blatantly, like in stage 3). The game is just as hard, but what was to be expected. Gradius suffers from power-up let down in a big way; that if you die after being fully powered up, it is nearly impossible to advance. Most players have no choice to accept this, and just power off the game at that point. It may be a brief showing for gamers, but it is sweet while it lasts. 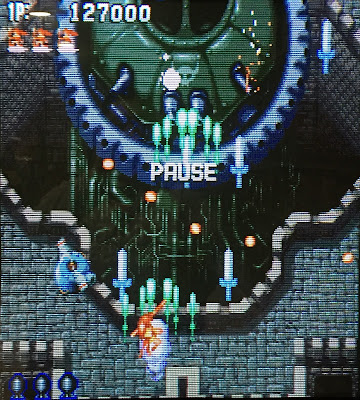 Gunbird
I'm sure there is some kind of story being conveyed here, but as it is all in Japanese I have no clue what is happening. The odd assemblage of characters, the happenings in the background, all point to some majestic plot. Since this is a shooter, none of that really matters. This is a solid, straight-forward entry from Psikyo, the makers of the excellent Strikers 1945 series, Sengoku Blade, Zero Gunner 2, and others. This one falls short of its higher profile siblings, but not much. All Psikyo games have the same tight gameplay, charging mechanics, special attacks, etc. The charge attack in this game is a less than useful melee attack that while strong, is limited in range and risky to use as you are defenseless during charging. It's not the first game I'd get, but I would definitely pick it up if I saw it. 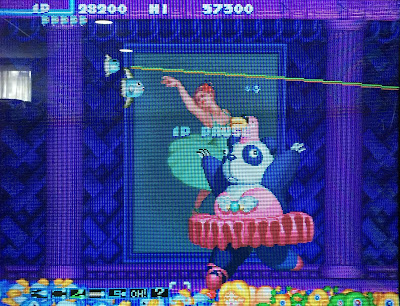 Parodius Deluxe Pack
Perhaps one of the original "cute'em ups", parodius is Konami's parody of its own seminal series Gradius. It plays a lot like its forbearer, except that it is wacky and twisted. There's some pretty off-beat design here, from sprites to bosses to weaponry, everything is fair game for parody. There are eight selectable characters (Vic Viper among them, of course) with unique power ups and animations. Don't let the cuteness fool you, this is a Gradius game with Gradius difficulty. If you want a shooter that doesn't take itself seriously at all, try this. 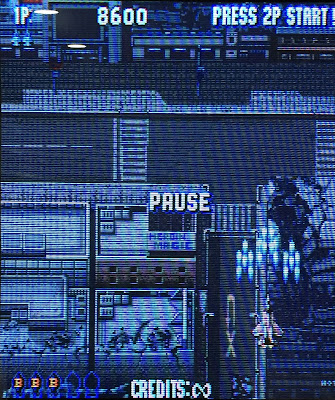 Sonic Wings Special
Sonic Wings first appeared on the Neo Geo, and was a fantastic outing on that machine. It was a series that saw three entries, with minor variation between them. Sonic Wings Special on the Saturn combines characters and stages from the three games, making it...special? A no frills, vertical shooter that does only the basics but does them well. 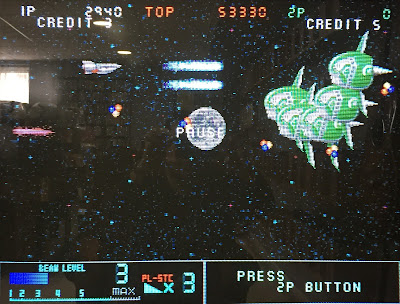 Metal Black
A seemingly innocuous horizontally scrolling shooter from the start, Metal Black employs a unique beam power up system. You collect floating molecules that when accumulated power up your main shot as well as give you a powerful screen-wide beam shot. In an clever twist, the bosses you face are also vying for the same molecules for the same reason! Each boss scrambles to suck up as many as possible as its a virtual game of Hungry Hippos until one of you collects enough to discharge a menacing beam shot. There's some hilariously fast scrolling text at the start up, which is in English, its just way too fast to catch. The backstory in a shooter doesn't matter much, but it was something I thought was funny. Its a good game. 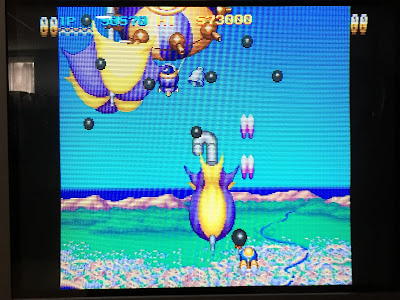 Twin Bee Deluxe Pack
As far as I know, there was only one North American Twin Bee game released, it was titled "Stinger" for the NES. That game had potential, and was actually quite fun. This compilation includes the arcade titles Detana!! Twin Bee and Twinbee Yahoo. The gameplay consists of regular arial shooting, and tossing bombs at ground targets with your boxing gloves(?). You power up by shooting at clouds, which release bells, which change color colors when shot, and each color provides a different power up. This is a different, and annoying method of powering up as you need to shoot to destroy threats, and incidental shots will change the intended power up. This multitasking can turn some away. You can also find power ups released from destroyed ground targets. A fun game for sure. 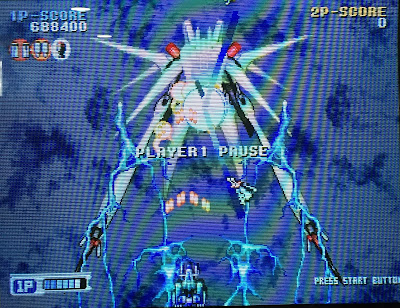 Steam Hearts
Originally a PC-Engine Super CD game, the Saturn port is a bit watered down and censored from its Hentai version. Despite its randy cut scenes, the shooting action is fast and frenetic, and controls well. Air and ground attacks are featured here, yet the emphasis on ground attack is not as pronounced as with Layer Section or Twin Bee.  A Health meter is a welcome addition that helps one make it to the boss battle. The sprite design is colorful and pops off the screen. It does make one feel a bit like a creep, when after each boss battle you bear witness to "interactions" between yourself and the boss character. This would never be released these days. Even still, its a good shooter that is marred by questionable extras and story.

So there you have, another ten Sega Saturn Shoot'em Ups to digest. This will probably be my last entry on the topic, as the rest of what I have does not measure up. If you are reading this you may well know that acquiring these games is no small feat, so however you come across your gaming opportunities, good luck.