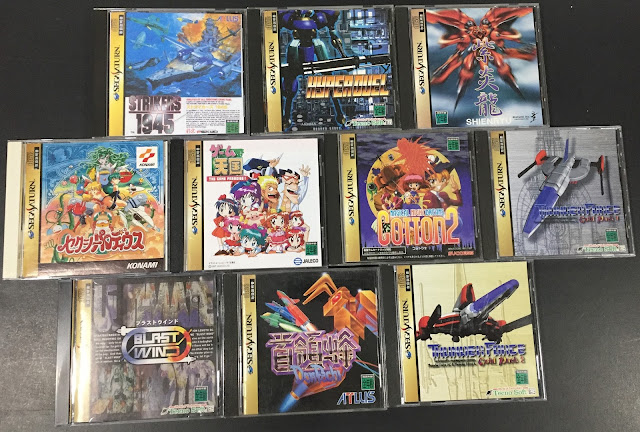 Sometime last year I posted my top ten Sega aturn shoot'em ups. If you haven't read that, you can find it here. This list is for the next tier that didn't make the top ten, but are great in their own right. They are not in any order, and this may not even be the last list. They are all worth playing, whichever way you choose to play them. In today's marketplace, it is hard to suggest purchasing any retro games that command top dollar, but as Google may show you, there are ways to play them regardless. 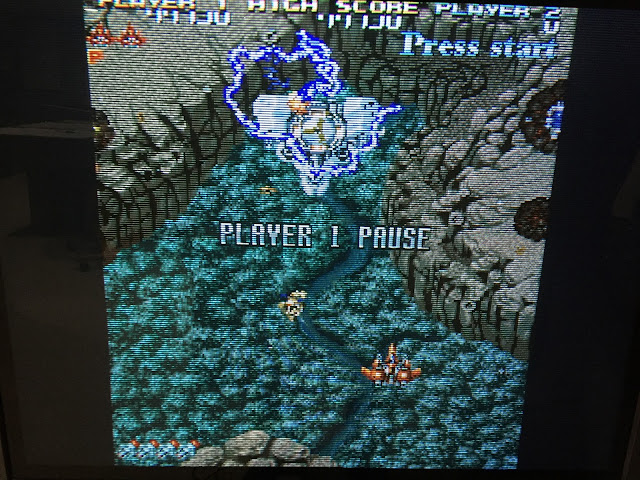 One of the first things you notice about this game is the awesome background depth and detail. Gunned down enemies will either explode, or careen down to the surface below leaving a smoke trail. The game has very well designed sprites. The weapons power ups consist of a spread-like vulcan, missile salvos, and an electricty wave that tracks down enemies and clings to them until they are destroyed, somewhat reminiscent to the purple toothpaste laser of the later Raiden series. This is lots of fun to use, but you have to be mindful that if your laser is caught up on a large enemy, it will take some time before you can fire again, so strategy must be employed. The music is meh, and the boss battles are hit or miss. This game was released domestically on the Playstation as Gekioh Shooting King, and largely went unnoticed. 2-D shooters did not fare so well during the 5th generation stateside, for they were deemed archaic, and reminiscent of old tech. In Japan, there was no such stigma, and this the abundance of 2-D shooters. Overall, it is a relaxing shooter in that you don't really feel stressed out while playing it, even though its not that easy in later stages. Its pretty good. 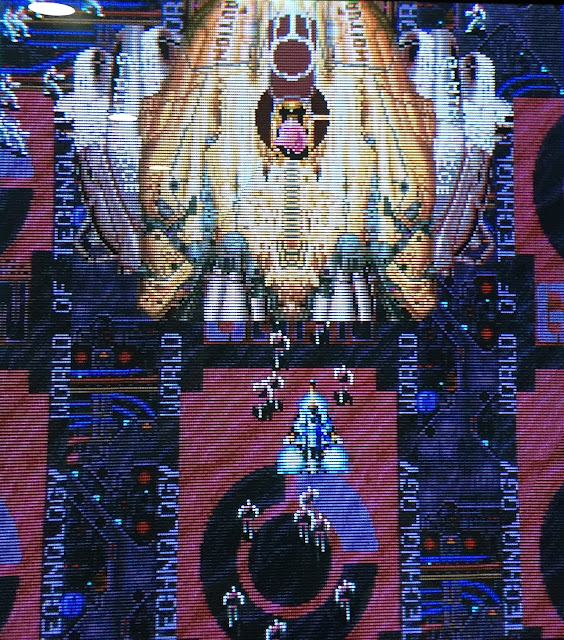 I reviewed this entry in a previous post, under the context of its market value. This is one of the more expensive games, but not worth the several hundred dollar asking price. It is a Tecnosoft title, so it has tones of Thunder Force here and there, but not enough to make it as good as them. The action is smooth, visuals are above average, but the sound mixing is off. What music is present is drowned out by too-loud sound effects. Switches throughout levels allow you to change your course occasionally, but not enough to change the scenery all that much; I think you end up at the same bosses regardless. A good game, just not worth the asking price. 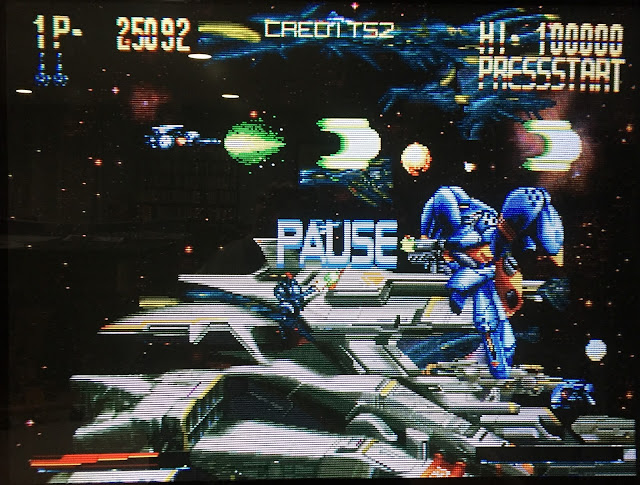 Another rare Tecnosoft entry, this game is highly coveted and it makes sense. The action is fast, yet forgiving. The game offers variety in your ship configuration, which alters your fire pattern. In the standard ship mode, you fire straight ahead, as expected. In mech mode, you can fire in different directions, and your fire is a wider shot; you can focus on offense more, but you are a bigger target. You pick up helper drones that come in either ship or mech mode, and they fly alongside you, seemingly firing at will. The gameplay reminds me of Gate of Thunder, and that's a good thing. The music is nothing short of awesome, to be expected from this pedigree. Fans of the Thunder Force series will feel right at home here. Unfortunately, this is a pretty rare titles, and commands top dollar. Whether it is worth it depends on how much you like these types of shooters. This may be the most expensive Saturn shooter as far as I know. Put it this way: it is worth Radiant Silvergun money but I wouldn't pay more. In retrospect, I should have included this in my top ten Saturn Shoot'em Ups list. 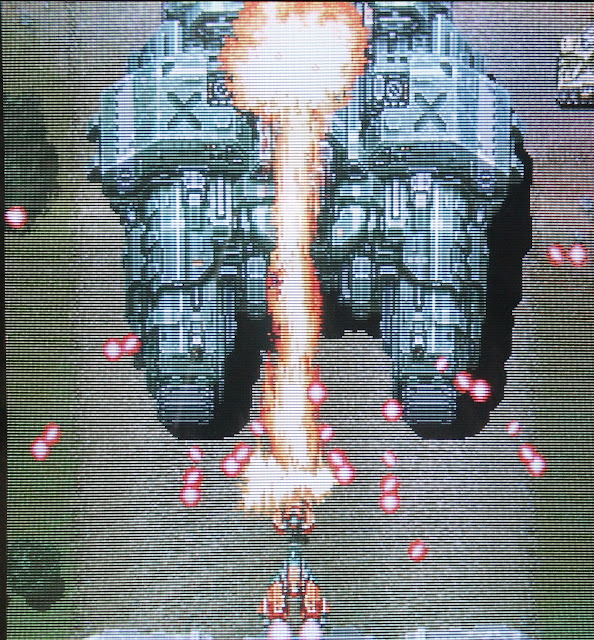 The precursor to Dodonpachi and its progeny, Donpachi shows the early ear marks of today's bullet hell shooters. While not the first, it solidified much of the formula seen today: hit counts, trade offs in ship firing and maneuverability, spread bombs or laser bombs, and so on. This Saturn version is somewhat maligned for its poor sound mixing (the vocal audio samples are clipped) and its interlacing on screen gets shifty when in certain viewing modes. Purportedly, the Playstation port is better in these regards. Aside from those issues, this is still a very solid and enjoyable game. The challenge seems to escalate at an appropriate rate, getting difficult at about the right time. 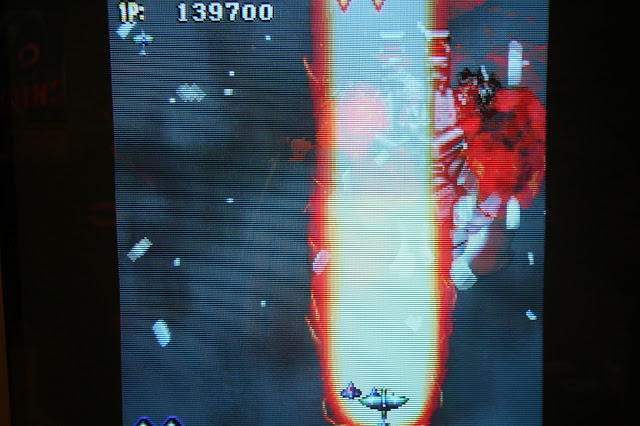 Although this is a port from a Neo Geo release, I have only come to know it on the Saturn. I reviewed this game a few years ago, and I still stand by it as an excellent under-the-radar selection. It is set in some alternate post WW2 inspired setting, with aliens attacking under the guise of conventional weaponry. During boss battles, the bosses change from the usual suspects to their true mecha selves, and of course have several forms each. I love the ship variety and special attacks; there's lots or replay value here to see how each of the ships play. From charge attacks, to bomb attacks, each ship is unique.

In the Game Paradise, you fly through the environs of an arcade. You are flying over arcade cabinets, through claw machines, and the like. It is quite the sight, and a very unique twist on the genre. There is some dialogue and menu options that are not in English, but I just go with the first option on each screen and that gets me to the main game. At the start you can choose your character, from a roster of a robot, a girl, a pig and a dude. I choose the robot as he sports a lock-on laser that is helpful when things get chaotic. You also can pick options, which happen to be little versions of the characters available to play as. The gameplay is wacky, a cute-em-up of sorts, and there's some bizarre happenings in this game's story. I can't read the dialoge, but I think even if I could it wouldn't make sense. A fun game though, with some creative stage design. 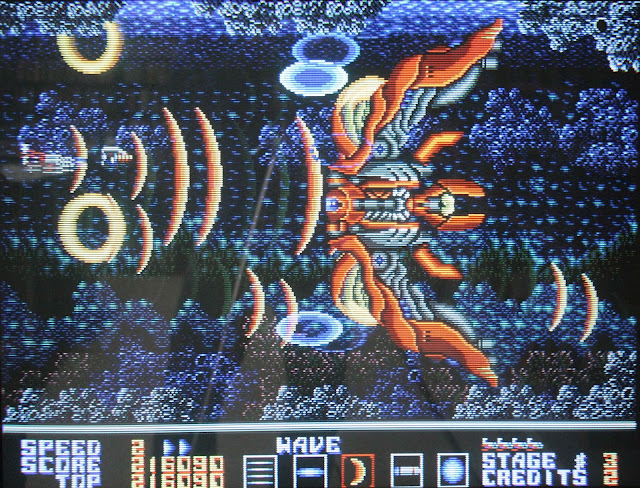 This may be cheating a bit to include two titles in this spot, but hey, they have the same name (mostly). Pack 1 includes Thunder Force 2 and 3, and are perfect ports of the Genesis versions. Pack 2 offers Thunder Force 4 (Lightening Force here in the U.S.) and Thunder Force A.C., which was an arcade release. Thunder Force A.C. was primarily TF3, with some stages swapped out for entirely different stages. Since three of the four of these titles were 16-bit Genesis titles, I kinda felt as if Tecnosoft should have made this one collection, instead of selling it over two discs. If you already have the Genesis carts, there no reason to get pack 1, but as far as I know this is the only way to play Thunder Force A.C. at home. 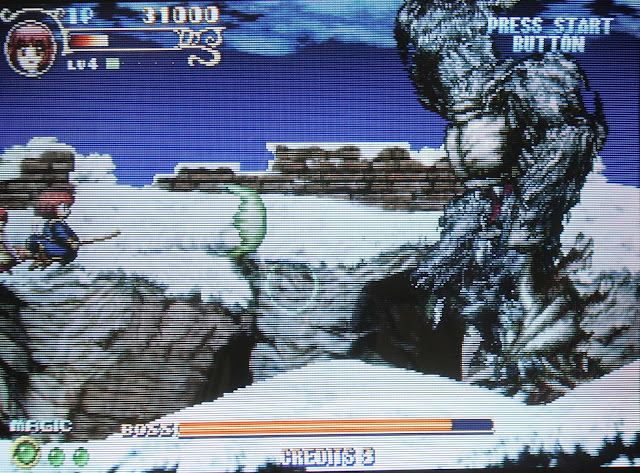 The Cotton series was very popular in Japan, but was nonexistent in America. The cutest of "cute'em ups", Cotton is a which that flies on a broom and shoots. The environments and graphical design are excellent and stylish, and the overall vibe is light hearted. Everything is highly animated, and the drawn sprites are just gorgeous. The gameplay is fine tuned and very accessible, and would be a recommended entry point for beginners, if it weren't for the price. If you have sought any of these out, you already know this.

The Parodius series is Konami's tounge-in-cheek parody of one of its founding series, Gradius. This is actually the third or fourth entry in this series, I'm not sure which. It is just as zany as the rest, and it takes its name from the cheekiness that abounds throughout. Semi-naked girls litter the backgrounds and some are even bosses! While the title "Sexy Parodius" may insinuate many things, it just refers to the visual aesthetics of the game, and some more suggestive than other games have shown up to this point. Still, there are sixteen (!!) characters to choose from, each with their own blend of power ups and animations. This game is truly a Saturn game; the earlier entries were passable on the 16-bit snes, but the on screen action reaches new heights, and to port it down would be an utter disservice.