The Sega Genesis/Mega Drive is known for its "blast processing", the main advantage it had over the SNES.  The greater gameplay speed lends itself to frenetic onscreen action, which is exactly what is needed for shooters.  There are A LOT of shooters on the Genesis, so much so that I don't have the stamina nor inclination to write about them all.  These are my favorites, so here goes. 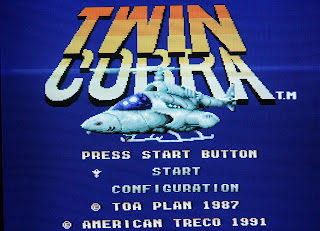 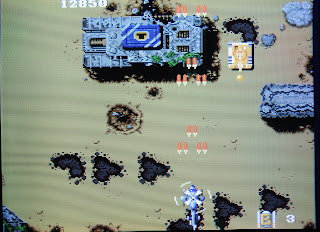 From afar, this looks like a generic shooter with generic power ups and typical gameplay.  Actually, up close that's what it is, but it does it well.  It is a no-frills, simple, straight forward, helicopter shooter.  I'm not sure why I like this game, but I do, and I am pleasantly surprised every time.  Maybe its because it plays just like you expect it to.  Maybe its the pick-up-and-play simplicity.  By most people's account this game has no business being here, but its my list. 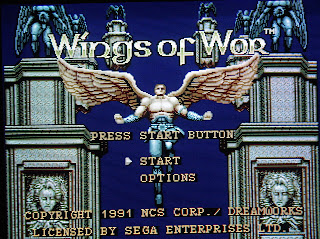 This game has some really cool visuals and stage themes.  It combines a mythological protagonist with a biological backdrop.  The bosses are big and segmented, and interesting to look at; some are downright creepy.  The action is continuous, with power ups are plentiful.  There is a neat screen tilting effect that is used here and there, and adds to gameplay. 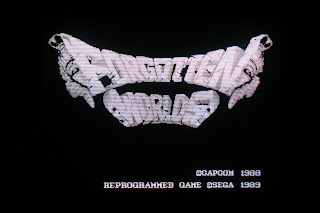 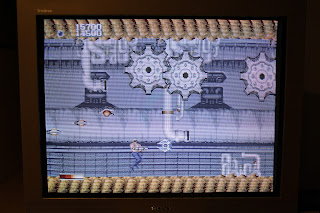 This is an interesting shooter that has horizontal and vertical levels, and two player co-op.  Enemies drop "zenny" (money) when destroyed, that you can use to purchase power ups in the shop that pops up here and there.  The control scheme takes some time to get used to, as A rotates your player in one direction, and C rotates the opposite direction.  The stages are typical but the boss designs are inspired.  The music is good, and the sound effects are a little rumbly here and there, but not to a fault.  A lot of fun to be had here, especially if you play with a friend. 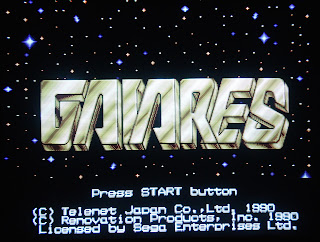 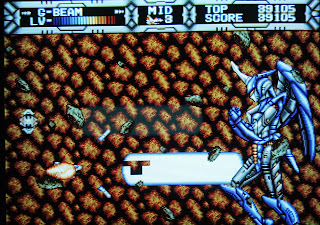 This game has a unique weapon-stealing feature, where you toss you option (the TOZ system) at enemies, which copies their firepower for your use.  This can be done three time in succession to increase the power of your weapon.  No other power ups are provided, and not all weapons are equal.  Its a novel idea, and works well here.  Part of the fun is experimenting to see which enemies provide the best weapons.  The difficulty is rather high on this one, especially with bosses and later stages.  The graphical design is excellent, as stages and bosses have a certain energy to them.  The music is pretty good too. 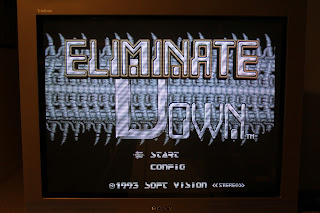 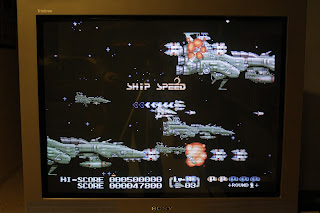 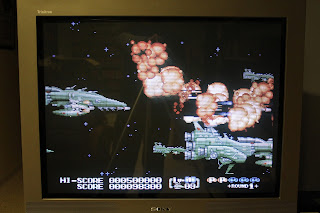 This Japan-only release is notorious for its ridiculous asking price, so my copy is a reproduction.  It offers meticulously detailed sprites, impressive animations, and lots of action.  This game pushes the system to its limits, and would have been a great asset to Sega in the console wars had they released it stateside.  Seriously, you've never seen the Genesis pull off some of these animations before.  The amount of sprites on the screen at once is impressive.  Perhaps its difficulty dissuaded Sega from a worldwide release, and its a shame, because this game could have been a system seller. 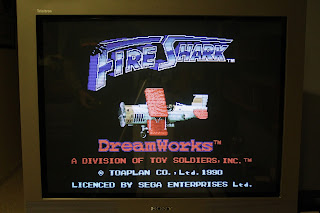 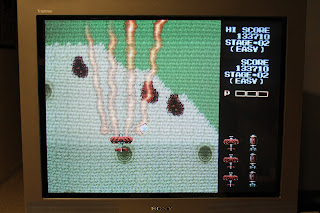 A simple, world-war 1 bi-plane shooter with addictive power ups.  There are three available: the spread shot (think Raiden), an figure-8 bullet pattern shot, and the awesome fire stream weapon that when fully powered up lashes fire all over the screen.  This game in not too difficult when maxed out, but dying in the later stages is rough as it is hard to get powered up when it takes all you have just to survive.  Perhaps this is another entry that I am placing higher on my list than the consensus but its just so much fun. 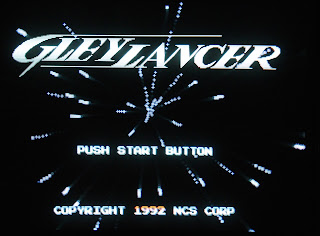 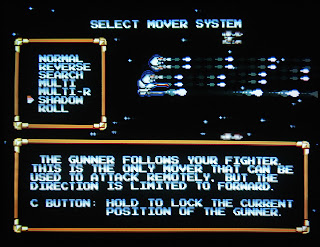 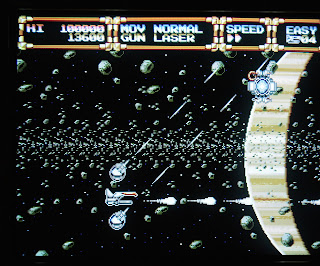 Another Japan-only release that is a shining example of what the Genesis can do with great programming.  The unique feature of this game is being able to customize the behavior of your options.  You can have them spin around you, fire in the opposite direction, fire at variable angles, follow you on a string, etc.  There is a choice to suit everyone.  Gradis V on the PS2 offers similar option customization, but that came out a decade after this game.  The gameplay difficulty is balanced, and there are interesting vocal samples when power ups are acquired.  All around, a great example of a horizontal shooter. 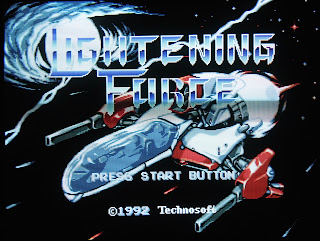 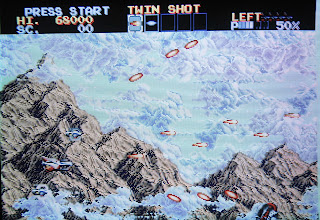 This game widely regarded as the pinnacle of Tecnosoft's (Technosoft (sp?)) flagship series, and its easy to see why.  The graphics are gorgeous and plentiful, the music is sophisticated and energetic, the boss battles are challenging and the iconic weapons are a blast to use.  The game modifies your ship halfway through and equips you with an energy blade, which is ridiculously powerful, provided you get close enough to a boss to use it effectively.  This is a hard game.  It is enticing enough to keep you coming back, but make no mistake, it's the hardest of the series.  It truly does live up to its billing, and the reason I don't have it higher on this list is because the other games have some serious nostalgia going for them. 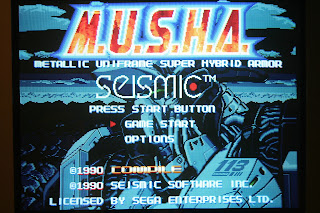 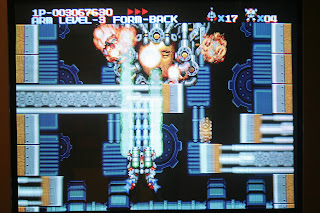 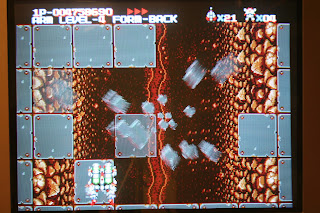 This game is part of the Aleste series, by developer Compile.  Many people, including myself, consider it the best of the series.  The graphics are well designed, based on Japanese mythology.  The music is heavy and melodic, and the gameplay is superb.  Your main shot can be powered up by collecting dropped p-chips.  Collecting these will also build up a collection of drones (options) that can be configured to fire is various directions by pressing C.  You can also acquire a secondary weapon (laser, bombs, shield) that can also be powered up by collecting the same icon.  Your speed can be adjusted at any moment.  This game is so well executed that it receives nearly unanimous acclaim.  Considering that it was an early title in the Genesis' life span, it is all the more impressive. 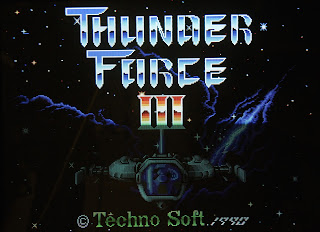 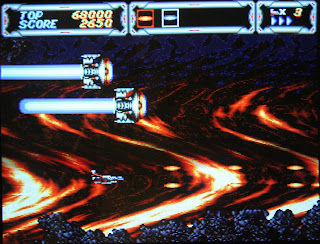 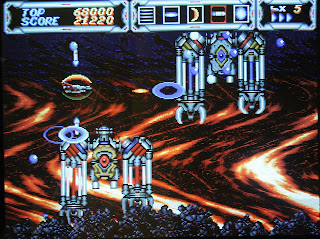 This game.  When I first got my Genesis, I had enough money for the system (which came packed with Altered Beast and a mail-in coupon for Sonic the Hedgehog) and one budget game.  For whatever reason, this game was only around $26 at the time.  The cover art and screen shots looked cool, so I chose it over ESwat and Alex Kidd in the Enchanted Castle.  Boy did I make the right call.  I was so addicted to this game; everything about it was awesome. The weapons, graphics, music, and innovative stages were all so well crafted that to this day it is one of my most played and cherished titles.
The weapons give the player immense satisfaction, as you dole out over the top punishment to the enemies throughout the game.  Couple them with the "claw" (options) and you got some screen-filling mayhem spewing from your ship.
The stage design incorporates the typical tropes of '90's video game design: snow stage, water stage, fire stage, land stage, space stage, etc.  One of the things that sets this game apart is how well each stage is executed.  The wavy fire background was mind-blowing for the time, and still holds up today.  The currents pushing your ship around underwater make you respect the environment.  Hidden power ups can be discovered by taking chances and piloting through dicey terrain and narrow crevices.
I can't think of many other games that pair the music so well with the stage, in fact, I can't think of many other games where I would want to listen to the sound test.  It may be a bit on the easy side, but being a shooter wimp that's fine with me. 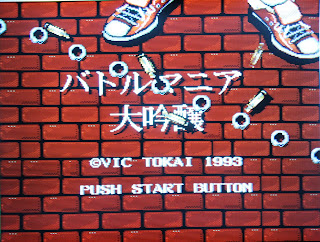 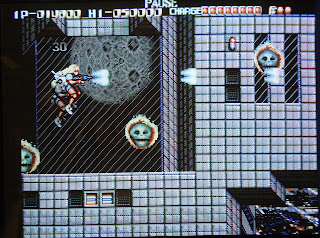 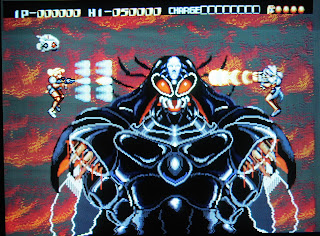 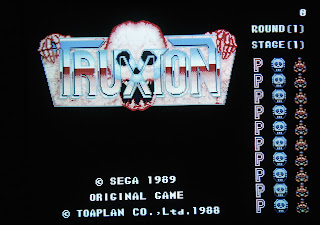 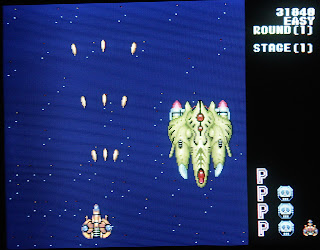